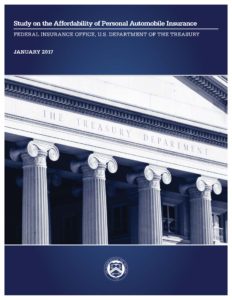 The Federal Insurance Office has released its “Affordability Index” findings on auto insurance, revealing ZIP codes where the cost of auto insurance led consumers to pay a higher-than-average proportion of their income for it.

The FIO cautions readers that the research — demanded by law — can’t be used for state-to-state comparisions, given the different insurance regulatory framework in every state. The agency is very clear up-front that nationally, this is sort of a fact-finding mission and a baseline data point of the number of total Americans who lack “affordable” auto insurance.

The FIO didn’t get too statistically fancy with how it calculated the Affordability Index. It took all the ZIP codes that either contained a majority of minorities or people deemed of low- to moderate-income. (By law, it was supposed to study affordability for both demographics.) If the amount paid for personal liability auto insurance exceeded 2 percent of the median income for the ZIP code, it was deemed unaffordable. Nationally, Americans pay 1.8 percent of average income for auto insurance, according to the Bureau of Labor Statistics. (It’s unclear if that insurance amount includes all forms of insurance or just liability.)

About 28 percent — 9,172 — of the 33,000-odd ZIP codes nationwide had the demographics to merit study. Only 845 of those ZIP codes cracked 2 percent, for about 18.6 million people lacking “affordable” insurance.

This report is disappointing, but hardly surprising. Having made use of an inherently unreliable ZIP-code-based approach to determine whether minority and low- and moderate-income consumers can afford to purchase auto insurance based on a subjective ‘affordability index’ of its own invention, the FIO’s findings offer little in the way of useful information.

Ironically, this sounds a lot like the state of California’s rationale for defining one way for insurers t0 conduct labor rate surveys and determine prevailing rate — a regulation NAMIC opposed:

Currently, the various insurers determine a geographic area in several ways, including but not limited to United States 16 Postal Service (USPS) Zip Code areas, city, counties, multiple counties, and some highly irregular and customized “markets” or “zones” which the insurer creates. The Department’s experience is that some of the geographic areas used by insurers in surveys result in artificially inaccurate, unreliable, and unreasonably low labor rates that are not representative of the market.

(California ultimately opted for a prevailing rate market area of the nearest six surveyed shops, counting the one a customer wanted to use if that shop took the survey.)

We kid, but the concept of insurance affordability is a double-edged sword for auto body shops, and some shops might find themselves agreed with the NAMIC with respect to criticizing the FIO’s mission.

Also, there’s a split in the insurance world on whether collision and comprehensive pricing should have been studied as well by the FIO (they weren’t), and shops might have different minds on that decision as well. Read more on that here.

Price baseline liability too low based on some regulator’s idea of fairness, and you run the risk of insurers leaving that market or exposed to what for the forseeable future appear to be higher auto severities. It also means either the insurer can’t afford to pay your bill and fights you on every line item or the carrier is forced to write or sell policies in which the customer pays more out-of-pocket — which could lead to less business if the customer forgoes repairs or claims.

As the NAMIC notes — and shops seeking to recoup new expenses through repair prices would agree — individual conditions dictate a business be able to respond accordingly with pricing.

“Nor is it surprising that the ZIP codes where average premiums were deemed by the FIO to be unaffordable tend to be located in states such as Florida, Michigan, and New York, which are widely known to have systemic regulatory and legal problems that lead to higher insurance costs for all those states’ consumers, regardless of their ethnicity and income level,” Detlefsen said in a statement. “The report briefly mentions a few of these problems in a half-page section titled ‘Factors Affecting Affordability’ but makes no attempt to analyze their effect on auto insurance premiums.”

However, price baseline liability insurance too high, and motorists might drop the kind of optional lines that help keep shops in business. (On the plus side, the Insurance Information Institute has observed that Americans are actually pretty good about buying both collision and comprehensive, and the FIO noted that “many, if not most” drivers bought more than the mandated state minimum, as indicated below.) Or drivers decide they can’t afford insurance, don’t buy it at all, and hit someone else — who then doesn’t have any way of paying for repairs.

And there’s another possibility, which probably wasn’t on regulators’ radar when they gave the FIO its marching orders in 2010. Because insurance grows too high, Americans in those areas decide not to own a car and instead Uber or Lyft their way around town, or they turn to an interesting new model where cars are leased month-to-month and the OEM insures the car and bakes that cost into the monthly price. Both completely change who the collision repairer’s customer is.

What will Trump do?

This could all be moot anyway. A Democratic Congress created the FIO in 2010 following the recession and financial meltdown last decade, and Fitch predicted in November that Republican President Donald Trump might scale back the FIO role somewhat in either repealing or amending the Dodd-Frank Act. The agency could vanish, with no follow-up data or action ever taken.

“The Federal Insurance Office – also created under Dodd-Frank – may be changed as well,” Fitch wrote. “The FIO could have a reduced or modified role under broader policy initiatives to lessen financial regulatory burden and to take a more US-focused approach generally. The result could reduce the prioritization of participating in international insurance regulatory initiatives.”

The NAMIC also suggested officials take a hard look at the FIO’s value.

On the campaign trail, Trump called Dodd-Frank a “disaster” with respect to its impact on small businesses but also called for a “21stcentury Glass Steagall,” another financial regulatory provision. NPR reported his transition team planned to “dismantle” Dodd-Frank.

None of these indicate the FIO as a whole would vanish. We emailed the White House on Friday seeking the president’s position on the agency and the affordability report but have not yet received a response from the press office.

But state regulators, researchers and might still study and act on the affordability findings; in fact, intrastate research is about the only venue that the FIO suggests could use this first round of research.

Clarification: Carriers wouldn’t have to use the California Department of Insurance’s labor rate survey template, but those who elected to follow the proposed template could receive a “rebuttable presumption” they were acting in good faith on labor rates. The article has been updated to reflect this.

“Study on the Affordability of Personal Automobile Insurance”