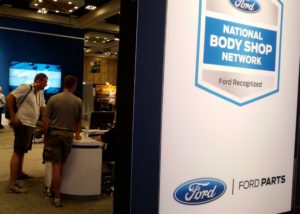 Shops certified by an automaker in aluminum collision repair reported optimism about the decision in the latest “Who Pays for What?” survey — perhaps for good reason.

Besides projections that at least more panels will go aluminum if the Trump administration — or California — retains fuel economy targets, October 2016 survey data suggests that OEM-certified shops are being paid more for aluminum work than uncertified repairers.

More than 500 of the auto body professionals which responded to the study — 64.2 percent — reported performing aluminum work at their body shop, up from 61 percent in 2015. (The survey asked that only one person per shop complete the study.)

Only 66 percent of shops which worked on aluminum had a separate aluminum work area, up from 63 percent in 2015. Those who still don’t could find themselves having corrosion problems, even on nonstructural repairs.

“Many shops doing aluminum repair work are not OEM certified, so
they may not have to meet the common OEM certification requirement of having a
separate, aluminum-only work area,” the Collision Advice-CRASH Network study states. Both ranges are higher than what uncertified shops charged for structural and non-structural aluminum: $85 and $75, respectively. That’s likely for the reason touched on above: Uncertified shops might not have all the tools, training and equipment — expenses and capability that might need to be recouped by or simply deserve higher rates. Out-of-pocket customers and insurers which will have to pay these rates might start to catch a break: Fewer shops overall reported charging for removal and installation of nonstructural components, such as fenders and door handles, as well as refinishing aluminum parts (which can be more demanding in terms of prep work).

“However, the percentage of shops being paid a higher rate for structural repair/replacement of aluminum components remained virtually unchanged at slightly more than 91 percent,” the report states.

The report also indicates many insurers are at or above 50 percent in terms of consistently paying shops which bill a particular aluminum labor rate. (It’s unclear if the data applied to all shops or just the uncertified ones.) As usual with the “Who Pays?” surveys, State Farm and USAA proved among the best for shops, and Progressive and GEICO the worst.

More than 200 shops replied to a question on their satisfaction with their ROI on OEM aluminum certification, with the majority (44 percent/108 shops) believing it would pay for itself. However, the second most popular response — a quarter of those polled — was bearishness that the investment would ever be recouped.

About 104 shops responded to a question about their favorite OEM certification program, revealing that Ford and Jaguar/Land Rover’s systems were the biggest hits. (Of course, some of the other OEMs might not have as many models incorporating aluminum.)

“Most of the comments surrounded the OEM programs that contained elements that were geared toward a return on investment for the shops,” the  Some expressed frustration that they spent time and money to qualify for other certification programs, only to see non-certified shops getting the work.”

Some of this might be poor marketing by the respondent shops, but OEMs do have mechanisms of helping certified shops pull in customers.

Simple techniques include OEM-level marketing and shop locators. “Nissan gives more resources, and sends the customer flyers with the shop name on it,” a Pennsylvania shop wrote.

More advanced ones involve collision detection and actually suggesting OEM-certified shops from the crash scene itself. (Insurers also are likely to get into this game for their DRP shops as well.)

And finally, there’s the “nuclear option”: OEMs worried an uncertified shop will screw up a repair can restrict structural parts or measurements to certified ones. If dealers attempt to skirt the ban and sell the unvetted shops parts anyway, OEMs can even go further and drop-ship parts directly to their network shops.

Some of these methods were touted by shops in identifying their favorite OEM partner:

“Some of the praise for these OEM certification programs included good communication to consumers about the program; parts restriction programs to ensure only qualified shops repair the cars; a thorough training program; and access to OEM repair information,” the survey stated.

Data from the October 2016 “Who Pays for What?” survey reveals uncertified shops’ aluminum rates. (Provided by CRASH Network and Collision Advice)

Data from the October 2016 “Who Pays for What?” survey reveals certified shops’ aluminum rates. (Provided by CRASH Network and Collision Advice)

Data from the October 2016 “Who Pays for What?” survey reveals which OEM programs certified shops like. (Provided by CRASH Network and Collision Advice)

Data from the October 2016 “Who Pays for What?” survey reveals certified shops’ happiness with their decision to seek aluminum certification.  (Provided by CRASH Network and Collision Advice)