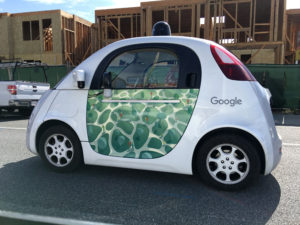 Google, which now annoyingly calls its autonomous car unit “Waymo,” told the California Department of Motor Vehicles that it was down to 124 “disengagements” in 635,868 miles driven on public roads.

Under DMV rules, OEMs must report any time an autonomous car demands the driver take control — or has control wrested away from it manually by the human driver.

The DMV doesn’t want OEMs to be “reporting each common or routine disengagement,” and so Google says it only reports situations where the autonomy actually fails or the driver thinks he or she should take over.

The computer failures are all chalked up to “software discrepancies,” which Wired reported Wednesday could include items like “the car’s lidar and camera reported slightly different data.” Driver manual overrides spanned a variety of reasons, including debris, an “unwanted maneuver” and instances of “recklessly behaving” other drivers.

Computer failures triggering disengagements fell from 0.64 per 1,000 miles to just 0.07 per 1,000 miles, while human manual overrides only dropped from 0.16 to 0.13 — a 19 percent decline and possibly the most relevant data point.

That seems to support the theory by Tesla and others that the hardware is effectively ready to go for self-driving cars now. The real stumbling block remains, as one would expect, how well the software reacts to the predictable (i.e. construction zones, forks in the road) and unpredictable (someone else drives like a fool in his or her own unique way).

Google and other OEMs’ data can be found here. For additional context, Wired offers a good perspective on why the data are “squidgy” and not apples-to-apples between OEMs, but still relevant.

Collision repairers should keep track of the technology’s progress because full autonomy could in theory eliminate most crashes, and lessons OEMs learn getting to that milestone could improve partially autonomous safety systems or “Autonomy Lite” features like Tesla’s Autosteer. These stages will likely begin to erode crash volume but raise severity.

“The Numbers Don’t Lie: Self-Driving Cars Are Getting Good“

Featured image: A Google self-driving car can be seen May 23, 2016, in Mountain View, Calif. (NNehring/iStock)