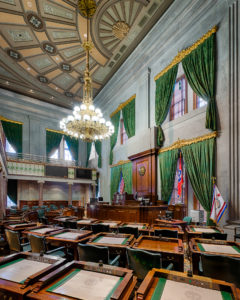 Tennessee lawmakers have introduced bills requiring customers be notified in writing of the existence of aftermarket parts on their vehicles.

Messages were left for both officials Tuesday. An aide for Stevens said he’d introduced a similar bill before.

Senate Bill 768 is similar to laws in numerous other states requiring customers be told clearly that they’ve received anything other than new OEM parts in a collision repair. In this case, the focus is solely on aftermarket imitation parts — not salvage or refurbished ones — as it only defines a non-OEM part as an “aftermarket crash part not made for or by the manufacturer of the motor vehicle.”

Crash parts are defined as “a replacement for any of the non-mechanical sheet metal or plastic parts, that generally constitute the exterior of a motor vehicle.”

The parts are required to have the manufacturer’s logo or name stuck to or inscribed upon them and “visible after installation whenever practicable” — typical state language that, if you think about it, isn’t being upheld if such branding isn’t commonly appearing on the exterior of the vehicles. (Of course, the customer probably wouldn’t want their car looking like a NASCAR vehicle bedazzled with a bunch of aftermarket brand names.)

If enacted, the law would take effect July 1.

Senate Bill 768 on Monday was referred to the Senate Commerce and Labor Committee. House Bill 1098 hasn’t yet been sent to any committees.

A joint fiscal analysis calculated that the bills wouldn’t reduce the number of aftermarket parts purchased.

“This legislation is unlikely to have a significant effect on the number of non-OEM aftermarket crash parts purchased in the state,” the analysis by Fiscal Review Committee Executive Director Krista Lee states.

Lee didn’t elaborate, but the reason seems obvious: Disclosures don’t prevent insurers from insisting on lower-cost aftermarket parts if the policy authorizes them to do so. The statements just better inform customers who apparently didn’t read the fine print in their policy.

However, third-party insured are under no obligation to take aftermarket parts, and that notice might keep insurers — and repairers — from attempting to put aftermarket parts onto their vehicles without their knowledge or consent.

The analysis also concludes that repairers and insurers will face little to no “significant” costs in complying. (It’s probably just the cost of the ink to print the two sentences 10-point type.)

It anticipates manufacturers will simply pass costs of identifying their parts with stickers or engraving on to the customer:

“Any increase in business expenses incurred by either domiciled non-OEM parts manufacturers or collision repair shops in affixing a logo to such parts will not be significant, as any such increase in expenses by the business will be passed down to the customer in the form an increase in the cost of non-OEM parts,” Lee wrote.

Georgia Thorson, administrator of the Tennessee Collision Repairers Association, said Tuesday she hadn’t heard yet of the bill, but she could “pretty much guarantee” her members would support such disclosures.

“It’s a really hot issue,” Thorson said of aftermarket parts in general. “… Everybody of course is in favor of OE parts,” or at least “very close to 100 percent” of her member repairers would prefer to use them.