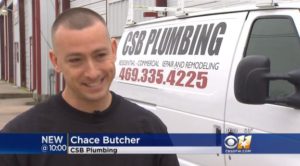 “How’d you like to make 125 bucks an hour?” Dallas-area anchor Doug Dunbar says in introducing a fun KTVT segment which hopefully will whet the current and next generation’s appetite for skilled trades like collision repair.

As groups like the Collision Repair Education Foundation will tell you, part of the trick towards solving the technician shortage is to convince a new generation — or perhaps the real hurdle, their parents and counselors — that a career in the skilled trades or a vocational program isn’t a step down.

The KTVT story by Robbie Owens, headlined “Six Figures, No Suits! The Blue Collar Careers Now Raking In The Cash” and posted Monday, doesn’t mention collision repair specifically. However, it does give a nod to welding and the more general concept of “automotive repair” in making the case for a blue-collar career.

“The more I started thinking about it– no matter what the economy does, no matter what happens, you’re always going to need something fixed, and it’s not something a robot or anything else can take away from us,” said Chace Butcher, who hadn’t originally intended to get into plumbing but now owns his own business, CSB Plumbing.

Butcher charges $125 an hour (which isn’t going to be all take-home, but you get the idea), and the story also quotes Southern Methodist University economist Mike Davis as describing skilled trades making $100,000-$150,000 “because they’re worth it.”

However, while such coverage might help inspire more people to seek careers in skilled trades, it might backfire a bit if shops can’t stay competitive with these other professions — a point raised by CREF. Why would an 18- or 21-year-old want to work as a body technician for an entry-level rate of $10-$12 an hour when they could get into welding in another industry and start out at $20, as CREF development director Brandon Eckenrode has pointed out.

“We’re losing,” Eckenrode said last year, arguing that the industry needed to take “a good hard look at” its pay.

But still, every little bit helps when it comes to filling the tech shortage, and the story makes a nice sales pitch for the trades. It also provides some ammo for shop owners who receive resistance from an adjuster on their labor rates. If Butcher is making $125 as a plumber (and we’re not saying he shouldn’t), then even the 95th percentile of body shops is a steal — it charged less than two-thirds that for body work, according to “Who Pays for What?” data.

“Six Figures, No Suits! The Blue Collar Careers Now Raking In The Cash”