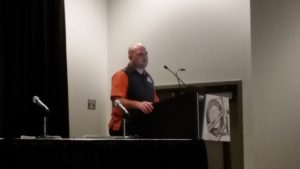 Though scanning (and getting paid to do it) has been one of the hottest topics in collision repair, an I-CAR expert said that auto body shops must also calibrate the systems they’re scanning.

Scanning is like an X-ray of somebody’s aching, possibly broken arm. It tells you what’s wrong — yes, the arm is broken. But it doesn’t actually fix the problem. Calibration is like setting the fracture to ensure the bone heals straight.

Scanning, “clearing the codes,” and doing body and electrical work on the car without actually calibrating its systems is like taking the X-ray and immediately slapping a cast on the arm without setting it. The bone might heal straight, it might not.

Because of this distinction, I-CAR has worked over the past year to provide the industry with resources to understand the concept of calibration, which might extend back further than a shop might think.

For example, the need to reset a passenger seat air bag sensor dates back years. OEMs were required to phase in “advanced air bags” between the 2003 and 2010 production years, and NHTSA says such technology first appeared in 2004.

Wheel alignment giant Hunter Engineering has pointed out that electronic stability control on common vehicles might require a steering sensor reset dating back to at least the 2000s. The government required electronic stability control as of 2012, but also has posted lists of mainstream and luxury manufacturers offering it standard or optional dating back to at least 2005.

With advanced driver assistance systems like lane-keeping and autobraking, miscalibration or failure to calibrate will be much more visible to the vehicle owner. The car might fail to stop for a collision — or perhaps stop for nothing.

I-CAR industry technical relations director Jason Bartanen recalled a situation in his native Wisconsin where a camera on a vehicle was aiming too high — “shooting over the top” of the car in front of it.

“It would never see a vehicle in front of it,” he said. Or perhaps the vehicle would stop under an overpass, mistaking traffic up there for an obstacle on the road below, he said.

To that end, I-CAR late last year created a calibration resource portal for shops, where they can get a sense of some of the ADAS options available standard or optional for the 2016 and some of the 2017 model year. However, it doesn’t contain some of the older technology that might need calibration, nor does it tell you exactly what’s on the car — only what might be.

For these reasons, it’s crucial that a shop obtain the build data — an OEM’s guide to exactly what it put on a specific vehicle VIN, Bartanen said. Shops can look this up through an OEM website. Estimating services might have VIN lookups, but these systems can sometimes miss options, according to Bartanen. As I-CAR points out, an OEM’s repair procedures trump any other instructions or best practices. In the case of scanning and calibration, don’t forget that a lot of those instructions are contained on the mechanical service and repair side of OEM repair information sites, according to Bartanen. (Which might explain why some shops didn’t know to scan until OEMs hit them over the head with position statements in 2016.)

A shop with an OEM technical information subscription will get both mechanical and collision repair procedures, Bartanen said. However, a shop which solely buys the ALLDATA collision module or relies on free collision body repair information from FCA and General Motors might not have the mechanical instructions they need. Such a knowledge gap affects which repairs the shop is qualified to do and which ones will have to be sublet to be done correctly.

That said, a repairer can have a good general checklist as to how he or she should be managing vehicle electronics by studying the scanning and calibration best practices I-CAR published on its Repairability Technical Support Portal in January. “This is not an I-CAR document,” Bartanen said of the best practices, nor is it “Jason’s opinion.” Instead, he stressed, it was developed and vetting with input from the “inter-industry” referenced in the I-CAR acronym.

That “inter-industry” includes interests like auto body shops, OEMs, scan tool manufacturers, and insurers, Bartanen said. That hopefully will give a shop and adjuster butting heads over calibration a common frame of reference that’s been supported by both industries.

Bartanen said the document “very nicely” complements I-CAR’s 2016 release of definitions of terms like calibration and pre- and post-scanning — important, distinct concepts which can be confused.

“A lot of those terms are being intermixed together (in the industry),” he said.

While I-CAR focused on ADAS, Bartanen said the outline/checklist would apply to “anything else that might throw a diagnostic trouble code” — for example, the airbag occupant sensor described above.

The I-CAR best practices guide can be found here on RTS, which is free to I-CAR students and Gold Class/Platinum facilities/staff and available to everyone else for a day pass or annual subscription.

A repairer can have a good general checklist as to how he or she should be managing vehicle electronics by studying the scanning and calibration best practices I-CAR published on its Repairability Technical Support Portal in January. (Screenshot from http://rts.i-car.com)