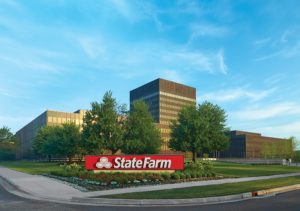 But the company reported a $7 billion auto underwriting loss, and property and casualty as a whole lost $1.2 billion.

State Farm did well enough in other lines and made enough in investments that it still companywide netted $400 million, down from $6.5 billion. (Thought the 2015 tally includes an asterisk in the form of $3 billion in merger-related capital gains.)

State Farm spokesman David Phillips said the company had nothing further to share besides the news release’s content.

Non-claim-related expenses like ads and overhead also contributed to the loss last year and likely did so again this year. We couldn’t find 2016 data, but Advertising Age, citing Kantar Media, reported the company spent $597.5 million on ads in 2015.

“That trend continues into this year,” he told the newspaper. “We are not alone.”

The paper reported comments from Phillips and the Insurance Information Institute attributing costs to frequency and severity, the latter affected in part by technology in vehicles.

The number of claims and the payout on claims for property damage and medical costs from accidents had a significant impact, he said.

“As technology evolves, the costs to repair that technology increase,” said Phillips.

This includes some of the fancier advanced driver assistance systems, as implied in the Pantagraph comments and recent car commercials, but it also involves more mundane safety technology.

A Mitchell expert observed last year that the average repairable vehicle age of 7 years means that stuff like side airbags appearing in previous-model generations is perhaps more to blame right now for severity increases. CCC has also observed the boom in high- and low-tech standard features, either of which can drive up severity.

There are two lessons here for shops.

First, it’s OK to raise your rates or other fees when your expenses go up, no matter what State Farm tries to tell you should be charging, citing internal “you can’t see it, but trust us, it’s right” market research. After all, State Farm raises its rates when its expenses go up — and it has every right to do so. That’s just Business 101, and there’s no reason why this wouldn’t apply to you as well.

In fact, one analyst told investors that State Farm’s major rivals also would probably follow this lead, according to Bloomberg Tuesday:

State Farm’s “highly unprofitable auto insurance results should provide further room for the industry to raise auto insurance rates. We would view this as a favorable tailwind for the other major auto insurers” such as Geico, Allstate, and Progressive Corp.,” Jay Gelb, an analyst at Barclays Plc, said in a note to investors. “Improved pricing should eventually lead to better auto insurance underwriting margins, which have been negatively affected by increased claims cost inflation.”

Second, State Farm is saying that it understands there’s a lot of technology on cars which costs more to repair. So when a local adjuster seems clueless or skeptical when you provide an estimate factoring legitimate repair costs for newer technology, you can point to such news coverage and tell him not to worry about it; his boss probably knows what you’re talking about (and might have already charged the claimant premiums to cover it).

We’re kidding State Farm a little here, but in fairness we should give credit to the carrier for what might be another contributor to their higher expenses. “Who Pays for What?” surveys show that while there’s certainly room for improvement and your local adjuster’s mileage may vary, State Farm consistently ranks as one of the best of the Top 8 carriers in paying shops asking for various legitimate not-included operations. (On a local level, a documentation-heavy Montana repairer has called State Farm “out of sight” good in terms of paying for repair procedures, including scans.)

Other carriers are facing the same vehicle trends as State Farm, but while their severity might be increasing, they’re not necessarily paying for as much of the actual proper repair (when a shop actually bills for it, that is) as State Farm is. That leads to shops or customers eating more of the costs — or the work not being done at all.

“Our focus of putting customers first for nearly 95 years continues to underscore our position as the leader in auto and home insurance and a leader in individual life insurance,” State Farm Chief Financial Officer Jon Farney said in a statement. “Our financial strength, local presence and broad product offerings allow us to help customers recover from the unexpected and be there to help life go right.”

Overall, State Farm, Farmers and USAA proved the most likely to pay direct repair program or non-DRP shops for the requested line items in the October 2016 “Who Pays?” study, the most recent. With the exception of GEICO and Progressive, all of the Top 8 carriers were more receptive to DRP shops seeking reimbursement for not-included procedures.