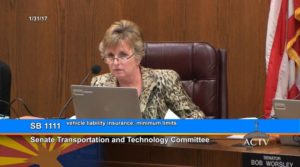 Senate Bill 1111 might prevent any auto body estimates above $10,000 from forcing the at-fault party or the third-party claimant to go out-of-pocket to cover the entire cost — a good thing for shops and customers as repair costs increase along with vehicle complexity (and possibly also more shops follow OEM repair procedures).

About 20 percent of Arizonans only carry the minimum, according to the Property Casualty Insurers Association of America.

However, there would of course be the chance of higher premiums so insurers can manage that higher monetary risk — the PCIAA estimated 9-13 percent increases, about $80 a year — if the law passes. That could lead to more Arizonans attempting to go without insurance illegally or dropping optional lines like collision and comprehensive.

“By passing this bill we are going to be putting some people in jail,” Sen. David Farnsworth, R-Mesa, said, according to the Associated Press. “I don’t think that’s a good idea.”

The average Arizona property damage liability premium was $130.25 in 2013, the last year which the National Association of Insurance Commissioners has available. It’s by no means the highest nationally; the U.S. average was $123.28.

Sponsor state Sen. Kate Brophy McGee argued at a Jan. 31 Senate Transit Committee hearing that the existence of a dollar value in the statute sends a message to Arizonans that the amounts in the law are enough insurance.

We couldn’t find a 1972 tally from a site we trusted, but Automotive News has reported that in 1971, the average new car was $3,742. So it seems as though the original concept was to protect the entire cost of a vehicle anyway — and possibly up into the high-end range.

$10,000 in 1972 dollars is worth $58,095 today, which means that even at $25,000, policyholders would be paying less in at least in spirit than what the Arizona Legislature was going for in 1972. The average new car sold for $35,309 in December 2016, according to Kelly Blue Book, which mean motorists with the minimum are only covered for a third of the potential bill.

As this data and the limit data suggest, it’s certainly likely that some at-fault Arizonans will be on the hook for more than the $10,000 covered by their insurance. Arizona doesn’t have underinsured coverage as a minimum requirement, so the victim potentially could find themselves underpaid for their loss if the other driver can’t afford the difference.

Brophy McGee said the legislation “is designed to protect the most vulnerable in our society” and argued it wouldn’t lead to a bunch of uninsured Arizonans getting thrown in jail, according to the Associated Press.

Bill supporters include the Arizona Trial Lawyers Association, Arizona Police Association and “44 Years is Too Long,” which might have to update its name again if this thing doesn’t pass the House.

The Independent Insurance Agents and Brokers of Arizona are neutral.

Be heard: Arizona legislator contact info can be found here.