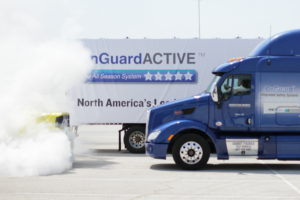 Meritor WABCO last month celebrated the 10th anniversary of its OnGuard Collision Mitigation System, crediting it for eliminating 2,000 fatal or injury accidents during that decade.

The company said commercial trucking fleets have quadrupled their use of the technology in the last five years, and the 130,000 systems in use today can be found on 70 percent of the leading 50 fleets for hire.

The technology is another example of the kind of vehicle safety systems which will seriously cut collision volume — in this case, for heavy-duty fleet repairers. Meritor WABCO estimates that OnGuard has cut rear-ending by up to a whopping 87 percent, which is remarkable given the typical results for private passenger vehicles seem to be in the (still-impressive) 40 percent range.

We asked Meritor WABCO Tuesday morning for more details about this success rate but have yet to receive a response. However, the company’s news release does point out National Transportation Safety Board research also found more than 80 percent of rear-ending can vanish or result in lower severity through collision mitigation technology.

Meritor WABCO added that OnGuard also has reduced rear-ending costs by up to 95 percent, which means commercial fleet insurers are catching a huge break on loss expenses and shouldn’t gripe when the technology increases part and repair procedure costs a little. “First to market in 2007 with an active braking collision mitigation system, OnGuard has far exceeded accident-reduction projections by the National Highway Traffic Safety Administration,” Meritor WABCO general manager and President Matthew Stevenson said in a statement. “Every day in the past 10 years, the system has proven its worth as truckers have driven it across billions of miles of North America highways. With the launch of OnGuardACTIVE in 2016, we now address 20 percent of the truck accidents that occur on stationary objects, further improving accident-reduction rates.”

“The reality is, if you look at the dramatic improvements in rear-end accidents that we’ve had as a company since we put the OnGuard technology in, it speaks for itself,” Lofgren said, according to Meritor WABCO. “There is so much evidence to say that this (system) needs to be a part of what is hauling freight today.”

OnGuard uses radar to examine the road in front of the driver “continuously monitoring speed, range and range rate of vehicles traveling ahead.” The system can both warn a driver and hit the brakes itself; it also includes adaptive cruise control, which works like traditional cruise control but also ensures the truck stays a safe distance away from the vehicle in front of it.

“The system mitigates or prevents impending rear-end collisions by reacting to moving, stopped and stationary vehicles,” Stevenson said in a statement. “It delivers high performance in all seasons and during low-visibility driving situations when camera-based sensors on other collision mitigations systems may be impaired.”

While in this case we’re talking about heavy-duty trucking and not private passenger vehicles, the Meritor WABCO announcement still should serve as a reminder that advanced technology isn’t necessarily limited to the most recent couple of model years, contrary to what some shops and insurers might believe.

At 10 years of existence, OnGuard is three years older than the average car that’s being repaired in a shop and only a year and a half younger than the average vehicle on the road today. Similar technology has existed on American cars, light-duty trucks or SUVs during that time as well; for example, here’s a 10-year-old Lexus press release talking about early versions of adaptive cruise control and automatic braking/collision warning.

Meritor WABCO last month celebrated the 10th anniversary of its OnGuard Collision Mitigation System, seen here in a promotional press image, crediting it for eliminating 2,000 fatal or injury accidents during that decade. (Provided by Meritor WABCO via PR Newswire)

Meritor WABCO last month celebrated the 10th anniversary of its OnGuard Collision Mitigation System, crediting it for eliminating 2,000 fatal or injury accidents during that decade. (Provided by Meritor WABCO via PR Newswire)