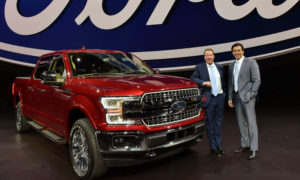 Ford announced Friday it would this year launch technology to automatically brake vehicles for pedestrians in the dark.

The upgraded Pedestrian Detection system will be available first for the European version of the next-generation Ford Fiesta. Not long after, it’ll be an option for the 2018 Ford Mustang and F-150 in the U.S.

The OEM tested the system at night in major European cities and on closed tracks with dummies.

Ford car communications manager Dan Jones wrote in an email Monday that the technology automatically kicks in above about 3 mph and works at up to 50 mph during the day.

The technology needs both the camera and radar to work, according to Jones. If the camera can’t “see” because a driver failed to activate the headlights, the solo radar isn’t enough of a fail-safe.

“The system utilizes the headlights and relies on information from a radar located in the bumper and a windshield mounted camera,” Jones wrote. “Both must be unobstructed for the system to operate properly. The range of the system depends on settings determined by the driver. For example, if the alert sensitivity is set to high, the system will give earlier, more frequent warnings.”

The system checks whatever the camera sees against a database of “pedestrian shapes” to ensure it’s not mistakenly braking for items like trees or road signs off in the distance. The camera takes more than 30 frames per second, which as Ford notes is beyond the standard movie speed of 24 fps.

“The video live-feed and viewing angle enables the system to pick out pedestrians, even in low-light conditions, illuminated only by the headlights,” Ford wrote. Note the reference to the angle, which reaffirms the need for collision and glass shops to precisely calibrate such modern technology within OEM tolerances.

The system can’t detect deer — which really could have affected the collision repair industry. That said, technology housed in the bumper and windshield is going to impact auto body shops and insurers to some degree by raising severity.

“The system is designed to distinguish people, or ‘pedestrian shapes’ from other objects like trees or road signs,” Jones wrote. “It does not have the capability to detect animals.”

The Pedestrian Detection technology will first warn the driver before making the executive decision to brake the Mustang, F-150 or Fiesta itself.

“We know some drivers find hitting the road at night a stressful experience. Especially driving in towns and cities, pedestrians – sometimes distracted by mobiles – can without warning step into the road, leaving even alert drivers very little time to avoid an accident,” Ford Europe active safety engineer Gregor Allexi said in a statement. “Day and night, Pedestrian Detection is designed to help identify people already in – or about to step into – the road ahead.”

Night blindness and the possibility of a collision are among the top fears of nighttime drivers, according to a poll sponsored by Ford. The National Highway Traffic Safety Administration found that 75 percent of pedestrian-vehicle collisions happened at night, according to Ford. In Europe, the European Road Safety Observatory reported in 2016 that half of the pedestrians killed on the roads were struck at night, Ford wrote.

“SCARED OF THE DARK? YOU’RE NOT ALONE. FEAR HANDED DOWN FROM CAVEMEN ANCESTORS CAUSES ON-ROAD STRESS; THIS NEW TECH COULD HELP”