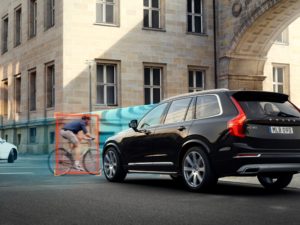 In another vote in favor of automated technologies reducing collisions, Liberty Mutual announced Tuesday an expanded partnership with Volvo that offers up to 10 percent discounts for the presence of the OEM’s City Safety system.

The program starts this month in Illinois, “rolling out to additional states throughout this year,” and it’s on top of any discounts already available through Liberty Mutual’s 7-year-old affinity program with Volvo.

All Volvos with City Safety are eligible for the TechSafety discounts — and such vehicles date back quite a few model years.

The first reference to City Safety on Volvo’s media site dates back to 2008, when the system appears to have been simply low-speed autobraking. That’s old enough where theoretically, the technology is cutting into collision volume today. (The average vehicle is around 11.6 years, and the average repairable vehicle is about 7 years old.)

“City Safety is of considerable interest to insurance institutes, and insurance companies on many markets are cutting premiums by up to 30 percent for anyone who insures a Volvo XC60,” Volvo wrote in 2008 about the technology, which came standard on the 2009 XC60.

Now, nine years later, City Safety is able to autosteer 2018 XC60s around obstacles as well as perform a host of other new safety functions.

Liberty Mutual will also study such technology’s impact on today’s accident frequency and severity and share the information with Volvo. It cited 2016 Insurance Institute for Highway Safety research that found City Safety cut rear-end crashes by 41 percent and injuries by 47 percent.

“Volvo continues to set the benchmark for automotive safety,” Volvo USA President and CEO Lex Kerssemakers said in a statement. “We are excited to work with Liberty Mutual and provide additional value to Volvo customers.”

Volvo City Safety includes not only autobraking for vehicles but also cyclists, pedestrians and large animals. We’d be particularly curious to see what Liberty Mutual’s finds this means for finds for policyholders during collision repairers’ deer season.

Volvo has confirmed the large animal collision detection system can react to a deer as well as bigger game, and it can at night brake enough to cut speed by 9 mph to react.

Nine mph might not sound like a lot, but it actually can have a large impact on the severity of the collisions that do happen. This Wired 2011 column from physicist Rhett Allain gets a little technical, but it demonstrates well how small changes in velocity can have a large impact on the outcome of a collision between a car and barrier (or in our case, a motionless deer-in-headlights).

“We believe vehicles equipped with these types of advanced safety features will not only reduce crashes but help our customers worry less on the road while providing them new ways to save on their auto insurance,” Liberty Mutual product strategy and solutions Senior Vice President Hamid Mirza said in a statement. “This agreement with Volvo represents an important opportunity to build upon the success of these new technologies now available to our customers.”

This also should suggest to Liberty Mutual (and presumably affiliate Safeco) adjusters that they’d better allow collision repairers to scan and calibrate all this technology properly according to Volvo repair procedures.

Otherwise, they’re wasting money on the front end with an unjustified discount for potentially nonfunctional or misaligned technology as well as the back end if these reductions in bodily injury and property damage are unavailable as a result.

This might not be a stretch. The Volvo affiliate insurance policy already guarantees OEM parts, after all.

Liberty Mutual’s move in conjunction with an OEM is an interesting development and gauntlet to other insurers to give discounts for safety technology.

Another gauntlet — Tesla in February mused that it might sell insurance in-house in the U.S. should insurers not cut drivers enough of a rate break, according to a Seeking Alpha transcript of a Feb. 22 earnings call.

“On insurance, if your cars prove to be as much as 90% safer than other cars on a per mile basis, as I think you’ve alluded as a reasonable target medium-term, and if insurance companies only offer your customers, say, like a piddling 5% discount versus a comparably priced car, would you consider offering a service or product like P&C insurance directly to Tesla owners from your own platform and your own stores?” Morgan Stanley analyst Adam Jonas said, according to Seeking Alpha.

“But in Asia in particular, where we started this, now the majority of Tesla cars are sold with an insurance product that is customized to Tesla,” he said, according to Seeking Alpha. “It takes into account not only this autopilot safety features, but also the maintenance cost of the car. So, it’s our vision in the future that we’ll be able to offer a single price for the car, maintenance, and insurance, in a really compelling offering for the consumer.”