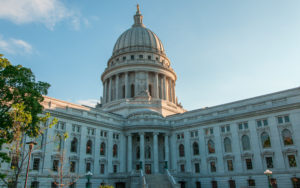 A bill in the Wisconsin Legislature would bring the state in line with federal law that formally recognizes an exemption for legitimate repairers to remove and reinstall VIN numbers during the course of their work.

U.S. Code section 18 USC 511 declares that anyone who “knowingly removes, obliterates, tampers with, or alters an identification number for a motor vehicle or motor vehicle part” can face as much as five years in prison and a $10,000 fine. However, it makes an exemption for “a person who repairs such vehicle or part, if the removal, obliteration, tampering, or alteration is reasonably necessary for the repair.”

Wisconsin Statute 342.30, however, says no exceptions except for the scrap industry.

Senate Bill 90 (and Assembly Bill 144) would add the exception that “A person who repairs a vehicle or vehicle part may remove and replace a decal that contains an identification number if the removal and replacement is reasonably necessary for the repair.”

Otherwise, a Wisconsin shop theoretically could face a fine of $10,000 and up to six years imprisonment.

Cleaning up the ‘grey area’

The issue arose a few years ago when a Wisconsin State Patrol trooper invited to a Wisconsin Auto Collision Technicians Association event shocked the crowd by pointing out they could be imprisoned for replacing VIN labels during the course of a repair, WACTAL President Larry Terrien recalled.

Terrien said authorities and repairers have existed in sort of a “don’t ask, don’t tell” state, and he couldn’t recall any prosecutions.

“I have not heard from anybody who’s been called on it,” Terrien said.

But WACTAL would still like to remove that current “grey area” and “make the law black and white,” he said.

“I can’t not repair the car properly,” Terrien said.

Hence SB 90 and AB 144, which have four sponsors in the Senate and 10 in the Assembly, respectively. WACTAL would also like to collaborate with the Department of Motor Vehicles and WSP on the issue.

Terrien said information labels could be found all over the car, and while their main purpose might be to convey other information — for example, tire pressure or federal safety compliance — the existence of a VIN number as well leaves a Wisconsin shop “stuck between a rock and a hard place,” Terrien said. Not replacing a label means diminished value for the owner — he estimated it could run thousands of dollars in one Mercedes example — as well as removing a source of information for the owner, repair shops and law enforcement personnel. He recalled one label with 17 pieces of information on it that is found nowhere else on the vehicle, and the VIN is just one of many items there.

“This is really a consumer protection issue,” Terrien said in a statement. “We need to get this law clarified.”

Law enforcement will still have safeguards. Terrien described the labels as made out of a special paper that “pretty much destroys it” when removed. (For obvious antitheft reasons.)

At least one OEM also sells replacement blank labels, though writing a VIN on it with a marker would look “hokey,” Terrien argued. (And you’d think this would especially set off red flags with shops and authorities, who’d jump to the conclusion the car was stolen even if it wasn’t.)

Terrien said he knew of two major manufacturers of replica labels, who pay what can be thousands of dollars worth of royalties to the OEMs to do so. That ought to give authorities a sense of security in the legitimacy of these replacements.

One of these is SB 90 supporter Auto Data Labels, which only sells replacement stickers to shops and OEM parts departments.

CEO Scott Saal said the company staffs a team of graphic designers trained to weed out fraud on VIN numbers and sticker images submitted by potential customers, and law enforcement agencies “call us up all the time” for consulting help on a suspicious decal.

“Nobody’s good enough to make it perfect,” he said.

The Wisconsin Capitol at sunset in Madison, Wisc., in May 2011. (fdastudillo/iStock)

A label on a 2006 Ford Escape shows the vehicle VIN number as well as other information. (Redacted) (John Huetter/Repairer Driven News)