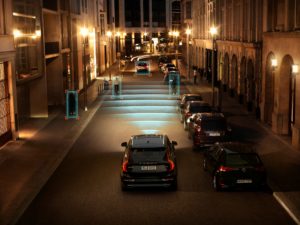 An informal poll of an insurance-heavy audience and a panel of insurance and telematics experts suggested Thursday that advanced driver assistance systems might breed complacency among drivers — which could help mitigate an impending decrease in collision frequency predicted as well.

Following a discussion about distracted driving’s impact and solutions, the TU-Automotive webinar asked for predictions about ADAS, including whether it could lead to decreased situational awareness.

Would the owner of a vehicle with autobraking, for example, be less focused on the road because they assume the car will stop for an obstacle? (For the record, OEMs providing such systems seem to typically say they’re not meant to be a substitute for an alert driver, merely an extra safety hedge.)

Webinar audience members — how many there were was not disclosed, only the existence of a “very strong amount of insurers listening in”– predicted both a major reduction in crashes and claims payouts and overreliance on ADAS technology. (In a nod to the former, Liberty Mutual announced earlier this week it’d give Volvo drivers a break on premiums if they had an City Safety ADAS system installed.) 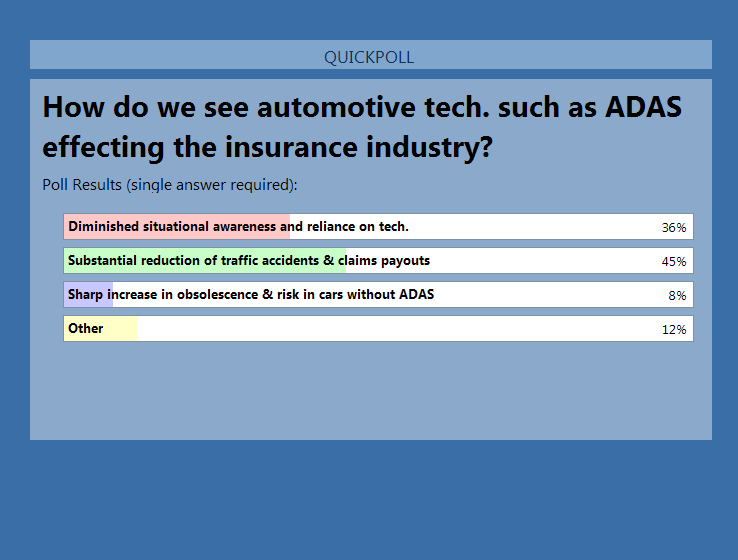 “I don’t look at one and two as being mutually exclusive,” MetLife countrywide underwriting strategy and solutions director David Niziolek said regarding the poll results above.

If we as humans can devote less focus to the road because vehicles are smarter, we will, he predicted.

Niziolek also pointed out that not all cars were connected, and “to date, we’re not really seeing a reduction” in claims severity. The average collision-repairable vehicle is 6-7 years old, depending on if you use CCC or Mitchell‘s data, and IHS Markit found the average vehicle on the road is 11.6 years old.

“I think the two kind of work hand in hand there, and it’ll be very interesting to see how this plays out,” Niziolek said.

Citing the age of vehicles, Harris agreed that the reduction in frequency and severity hoped to accompany ADAS wouldn’t appear for years.

“I do think, long-term, we’re going to see the reduction in accidents and payouts, but It’s say we’re at least a decade away,” he said.

Metromile would near-term have to control the behaviors affecting frequency and severity, according to Harris.

Representatives from two telematics software providers agreed as well, describing it as a human behavior question. TrueMotion senior data scientist Nick Arcolano said his company would like to understand how humans interact with ADAS.

“It’s all about the human in the equation” Zendrive insurance Vice President Rob MacKethan said.

“Webinar The Risk of Distracted Driving in a Digital Age”

This Volvo image simulates City Safety on the 2015 Volvo XC90. (Provided by Volvo)

An informal TU-Automotive webinar poll April 6, 2017, of what was described as an insurer-heavy audience weighed in on advanced driver assistance systems. (Provided by TrueMotion via TU-Automotive)