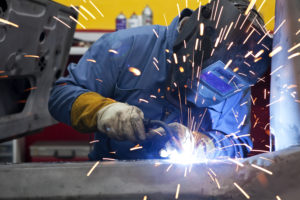 State Farm is the only auto insurer to require all three of I-CAR’s welding tests at direct repair program collision repairers, the educational organization confirmed Thursday.

AAA, Allstate, GEICO and USAA all as of April 2017 required direct repair program shops to have completed at least one of I-CAR’s three welding certification courses, I-CAR said.

But State Farm, the country’s No. 1 auto insurer, will surpass them all by demanding between one to two techs per Select Service shop complete “Steel MIG Welding” (WCS03), “Steel Sectioning” (SPS05) and “Aluminum MIG Welding” (WCA03) by early 2018, according to I-CAR.

The two steel courses must be finished by Dec. 31, according to State Farm’s April 13 announcement. The aluminum test must be passed by March 31, 2018.

“State Farm is the first company out of the gate to require all three,” I-CAR director of business development Elise Quadrozzi said Thursday. 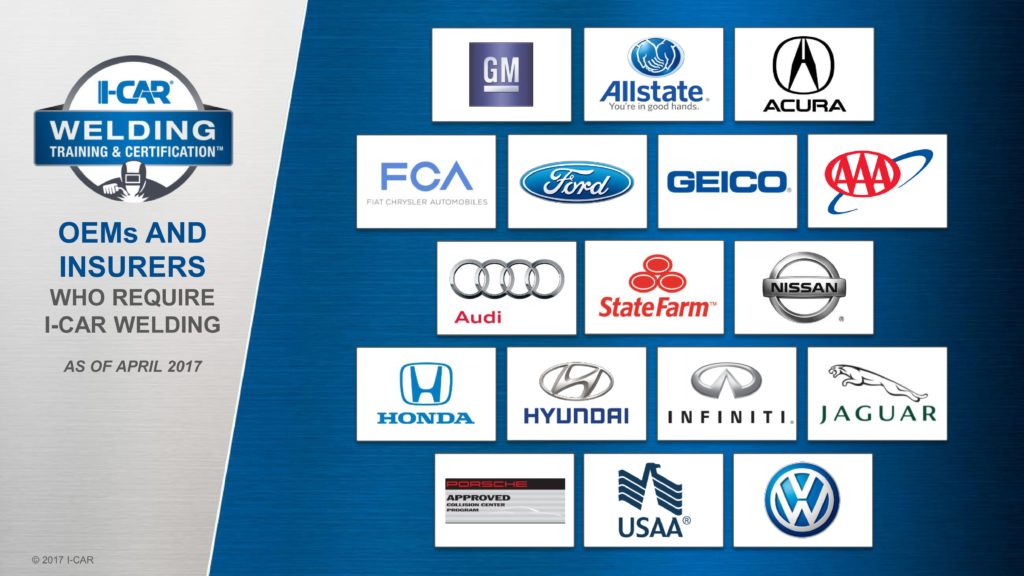 State Farm requires one technician with all three credentials for shops with 10 or fewer techs. Shops with more than 11 technicians must have at least two.

Various combination of other OEMs’ courses (Audi, Jaguar Land Rover, Mercedes and Toyota) and one from welding training firm Lew Kinney will also satisfy this requirement.

Industrywide, only 1,973 collision repair facilities (out of more than 33,000) had technicians current on all three certifications as of March 31, according to I-CAR.

I-CAR said that State Farm had consulted with it prior to the insurer’s announcement April 13, and the carrier had originally mulled excluding rural shops from the aluminum requirement.

I-CAR’s response, according to I-CAR business development director Nick Notte: “There’s a Ford dealer in every one of those rural areas.” Select Service shops would inevitably encounter aluminum F-150s.

State Farm did grant a WCA03 exemption to shops within an MSO which only sends aluminum work to a few locations within a region (“load leveling”). The MSO’s aluminum shops obviously need all three courses; the others only must take the pair of steel tests.

Asked about the possibility that the volume of technicians yielded by the State Farm decision would lead to I-CAR taking it easier on the Select Service applicants to avoid losing the business, I-CAR offered the following statement:

“Partnering with State Farm is a positive step in furthering the industry’s progress toward ensuring that every technician is trained to properly repair vehicles. I-CAR’s position in the industry is neutral. Providing substandard training would be a severe disservice to our students, State Farm and the industry. We take the integrity of our programs very seriously and the delivery of consistent training, by well-trained instructors, will be unwavering.”

The same would presumably hold true of other carriers with similar requirements.

I-CAR’s tally found No. 4 Progressive a notable outlier among the nation’s Top 5 auto insurers in not requiring a DRP shop to complete an I-CAR welding course. (Though the carrier asks if a shop has done so in a questionnaire for prospective DRP candidates.)

“It’s a puzzling dilemma to us,” Quadrozzi said.

“It’s part of our contract,” he said.

Progressive leaves the decision of where to obtain it up to the shop, Sibel said.

“We give them the choice,” he said.

Asked if the carrier requires testing or merely training — the difference between the I-CAR welding program, which I-CAR describes as certification, and its regular courses, which it doesn’t — Sibel wrote in a follow-up email: “As part of our agreement, we expect shops as part of their training to be able to pass any required testing.”

State Farm’s decision, even if it doesn’t go as far as some shops would like, means it’s game on for the rest of State Farm’s competitors. Notte said I-CAR anticipated more carriers will follow suit.

I-CAR’s deal with State Farm isn’t exclusive; others are welcome to negotiate similar programs with the educational organization.

I-CAR offers Select Service shops discounted rates and volume discounts. Any repairer who trains more than the minimum required by State Farm will see those technicians get free admission to the “Vehicle Technology and Trends 2017” course.

“Each OEM and Insurer with a service network represents a unique situation,” I-CAR wrote when asked if the welding partnership was exclusive to State Farm. “I-CAR encourages collaboration and will work with OEMs and Insurers to build programs that fit their network’s needs and equip their technicians with ongoing collision repair training.”

The clock was ticking anyway. The average repairable vehicle is between 6-7 years old, depending on if you use CCC or Mitchell’s numbers. The first year of aluminum F-150s will be turning 3 in 2018. Other OEMs are adding aluminum in select collision-prone areas like panels and closures. (Also hoods and bumper beams.)

Of course, just because a carrier doesn’t require parts of the I-CAR welding series doesn’t necessarily mean a DRP shop lacks those or similar credentials. OEM certification programs require either two or, in the case of the Ford F-150, all three. Luxury OEMs typically have even tougher welding requirements for their networks. And welders also can be vetted through entities like the American Welding Society.

But given I-CAR’s estimates of how little of the industry has formal welding training or continuing education requirements and some of its welding-test site inspection stories, it seems reasonable to assume that a large swath of collision repairers haven’t externally verified if their welder is truly qualified to work on the last two decades of vehicles.

Some carriers are arguably exceeding State Farm in other requirements. No. 2 Allstate, No. 5 USAA and Manitoba Public Insurance do require DRP shops be Gold Class, while State Farm doesn’t, according to I-CAR. 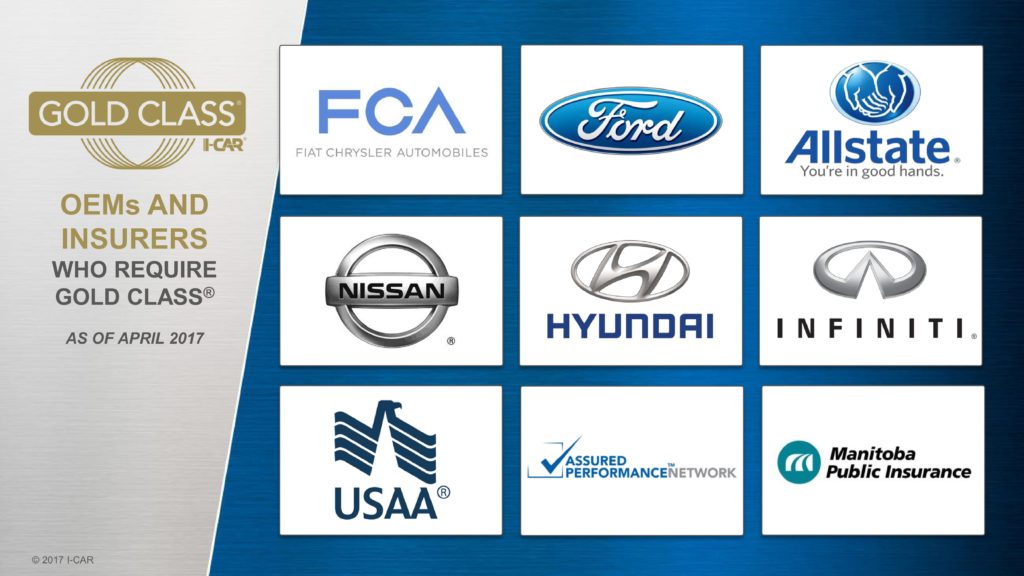 Since we had Sibel on the line, we asked him if Progressive demands some sort of shopwide recognition by an external party — I-CAR Gold Class, Verifacts VQ, OEM certification, etc. — but doesn’t demand a specific one. He said that was the case.

Technically, Manitoba Public Insurance’s requirement of Gold Class also puts it in the category of the carriers requiring I-CAR welding, just indirectly. A Gold Class shop needs a Platinum steel structural technician, who must have completed WCS03. Eventually, he or she must reach ProLevel 3, which does demand the steel sectioning course. Gold Class shops have no aluminum welding requirement.

Industrywide, only 1,973 collision repair facilities (out of more than 33,000) had technicians current on all three I-CAR welding certifications as of March 31, according to I-CAR. (TerryJ/iStock)

Various insurers and OEMs require some combination of I-CAR’s three welding tests to participate in their networks. (Provided by I-CAR)

I-CAR’s welding certification requirements as of April 2017. (Provided by I-CAR)

Certain OEMs and insurers require I-CAR Gold Class as a condition of joining their networks. (Provided by I-CAR)