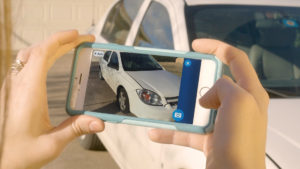 Allstate has told collision repairers it will cease using its drive-in inspection stations in favor of its QuickFoto Claim photo estimating system within the Allstate app.

“Findings from a recent test validated that QuickFoto Claim continues to be a viable option for inspecting vehicle damage and showed that customers embrace this option,” Allstate auto claims line management director Sandee Lindorfer wrote in a recent message to Good Hands direct repair network shops. “For this reason, Allstate has begun a countrywide transition from drive-in inspection centers to a virtual experience. By this summer, we expect the vast majority of drivable auto claims to be virtually inspected countrywide – starting with Texas and California.

The transition in Texas and California was slated for March, according to the memo provided to Repairer Driven News. Herndon said Tuesday that more states were rolling out as the program ramped up over the “next weeks,” with completion anticipated sometime in the summer.

“It makes more sense for our customers, really,” Herndon said; QuickFoto Claim was more convenient than setting up an appointment and making a policyholder travel to a drive-in.

“This is really a big customer play,” he said. Allstate had already seen roughly about 90 percent of its customers who opted to use QuickFoto Claim able to complete the photography themselves, without having to seek app assistance through an agency or other means, according to Herndon.

“It’s still early in the overall switch to have numbers of total people using QFC in general, but I assume we’ll have that in the future, too,” he wrote in an email. “The sample size is still relatively small since we’re closing drive-ins in a deliberate way. ”

“The adoption rate on this one is pretty solid,” he said. The technology, which has been available for a few years, has already “significantly” cut cycle time, he said.

Customers who opt not to use QuickFoto claim still have the traditional options of having an estimate done at a drive-in (until they close), a direct repair shop, agency, or via an adjuster traveling to their house, Herndon said.

“We’re not going to say ‘sorry, you can’t submit a claim’ – we’re going to find a way to help anyone get their claim submitted,” he wrote in an email.

The technology can be used by both first-party claimants as well as a third-party driver struck by an Allstate policyholder.

The future of such photo estimating seems to be predictive analytics, for good or ill. For example, Mitchell has been working to develop a predictive analytics service in which an artificial intelligence studies a photo of a battered vehicle, compares it to Mitchell’s vast database of estimates with images, and gets a rough idea of what the final repair cost would be based on similar examples.

A competing predictive analytics option from CCC relies on direction and velocity sensed during the collision to estimate severity. Both have the potential to be more accurate than a desk reviewer but also raise serious “garbage in, garbage out” concerns.

However, Herndon said Allstate wasn’t using predictive analytics on QuickFoto. Images were sent to an remote adjuster for an estimate by a human being.

“We are always looking at ways we can make that experience faster, and seamless for our customers,” he said.

All deskbound adjusters must be licensed in the state for which they’re adjusting, Herndon said. The system matches up a claimant with the proper staffer on Allstate’s end.

The system could and does triage total losses, which saves an insurer and shop time by directing vehicles right to a salvage yard. (Herndon said a video presenting the technology as applicable to only minor accidents probably needs to be updated.)

Though both Allstate and Nationwide have both tested more advanced means of estimating hail through images, Herndon didn’t think it would be used for comprehensive damage from flooding or hail.

Allstate promotional videos from 2013 and 2016 suggest that a customer can get an estimate for damage “without having to meet an adjuster, or visit a body shop.” Herndon said this referred more to streamlining the initial estimate — “having to go there (a shop) as your first place” — than a suggestion that a customer shouldn’t go to a repairer.

Lindorfer assured shops that they wouldn’t see a decline in business, just perhaps more unpredictability on when customers appeared.

“We expect the process to be fairly seamless. However, there is potential for a small change in the way you are notified about a customer referral to your shop. With this new process, customers with an estimate from Allstate may show up at your locations more frequently without us having generated an assignment to you.”

Asked about the prospect of hidden damage not revealed by the photo, Herndon argued that the physical adjuster would have missed it as well, though perhaps some in-person actions like looking under the car would be lost. But that’s where the body shop comes in, he said.

When asked about supplement rates as a KPI, Herndon said, “We always have and will monitor supplements. … The goal in doing that is to try to speed up the overall process both for the customers, which obviously is good, they get their car back sooner, and for the shops, they get more cars into their shop.”

As for hidden damage, “I think you see very little teardown today,” Herndon said. He gave a rough estimate that “nine out of 10” shops weren’t deviating from the estimate. But Allstate would continue to learn what was and wasn’t visible from the images.

Correction: An earlier version of this story contained incorrect information about the rate of QuickFoto Claim adoption. The data referred to the percentage of QuickFoto Claim users who were able to use the app themselves without requiring assistance from an agency or other channel. The article has since been corrected to reflect this.

Featured images: Allstate’s QuickFoto Claim and how to use it is shown. (Screenshots and image provided by Allstate)