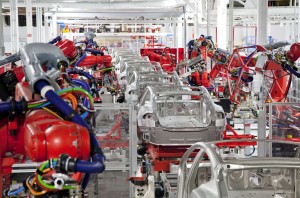 Editor’s note: I-CAR raised a concern about our use of quotes from a more general discussion of its welding program in relation to the topic of its welding relationship with Tesla. The article has since been updated to reflect I-CAR’s answers to questions specifically about the welding testing it will oversee for the OEM.

It’s the million-dollar question about Tesla’s announcement it would cease testing certified auto body shops itself and instead delegate the welding exams to I-CAR:

Will that testing take the form of I-CAR’s in-house three-part welding series, or what some shops told us was more rigorous Jaguar Land Rover coursework administered by I-CAR on that OEM’s behalf?

The answer could determine which standard of welding Tesla owners — and not just Model 3 drivers, but potentially Roadster, Model S and Model X owners as well — might receive on their vehicles as well as how easily auto body shops can qualify for the Tesla body shop network. Only Tesla certified repairers can receive structural parts for collision repairs.

Of course, it’s also possible OEM might want one level of auto body repair competency for the mass-market Model 3 and a higher standard for the higher-end Model S, X and Roadster.

At this point, it’s all up in the air. Tesla did not respond to inquiries, and I-CAR on May 1 declined to comment and referred us back to Tesla.

“I-CAR does not have any comment on the Tesla internal announcement at this time,” an I-CAR spokeswoman wrote in an email. “It may be in your best interest to contact Tesla again for further information.”

Tesla informed its certified collision repairers in April that it would replace its in-house training and welding requirements for curriculum held online and administered by I-CAR, respectively.

“Building on the past 5 years of experience, we have been able to evaluate and dramatically simplify training, and will no longer require instructor led, onsite training,” Tesla wrote in an email to its certified shops obtained by Repairer Driven News. “We have developed online training as a more time and cost effective way to train your technicians to be approved for Tesla repairs. Online training offers many benefits not possible solely with instructor led training, such as unlimited reviewing of procedures, more frequent class offerings and updates for the network, and less time to train our whole technician population vs cycling everyone through constrained class rooms. Cost to you is greatly reduced, as weeks of lost production and travel expenses are eliminated as well. …

“Structural technicians will no longer have to travel to Tesla for onsite weld training and recertification. We have created an arrangement with ICAR to achieve the necessary qualification, without the expense of lost production and travel previously required.”

Not all of the four Tesla-certified shops interviewed for this story — which we’ll call Shops A-D to preserve their Tesla relationships — had JLR certification, but all were familiar with I-CAR’s in-house program, and described it as easier than the existing Tesla welding requirements.

There was strong opposition to substituting the I-CAR welding series for Tesla’s welding testing, but the two with JLR experience seemed to indicate the Jag-I-CAR curriculum would be an acceptable replacement.

The owner of Shop D described the California welding training he took earlier in the decade for Tesla as the “grueling piece of getting a weld to meet Tesla requirements” and very similar to the JLR test. “The pressure was on,” he said.

Lowering the Tesla welding benchmark would be “just crazy,” he said.

“That’s the frightening thing,” Shop B’s manager said of the possibility that Tesla would rely on I-CAR’s core welding program only. He said I-CAR’s aluminum welding course was too easy.

We asked I-CAR about the difference in rigor between their three welding courses and what they administer for JLR and about shops’ concern that switching the Tesla welding requirements to the I-CAR trio instead of something like the JLR-I-CAR partnership would be insufficient.

I-CAR released the following statement in response to both questions:

I-CAR’s Welding Training & Certification program is highly regarded by OEMs, Insurers and the industry, as over 15 have partnered with I-CAR in requiring some to all welding courses to date.

In regards to I-CAR’s relationship with Jaguar Land Rover, while the OEM recommends JLR Authorized Aluminum Repair Network technicians to train and take I-CAR specific courses and weld assessment tests, it also requires them to take its own JLR network training.

Each OEM’s network training approach is different, but it is I-CAR’s mission that every welder, whether part of a repair network or not, is equipped with knowledge and skills to perform proper and safe welds.

Some of the owners also pointed to Tesla’s expansion of approved welding equipment as an excessive relaxing of standards by Tesla.

Shop D’s owner said that only one welder used to be approved by Tesla — a Fronius, the “welder of choice” for other OEMs with in-house welding tests.

Now, eight are approved, a factor Tesla pointed out in its email to shops.

“That piece of it already tells you” that Tesla was “watering it down,” Shop D’s owner said.

“On the equipment horizon, we have already approved 8 of the most popular aluminum welders prevalent within the collision repair industry,” Tesla wrote. “We are exploring promising alternatives to other equipment for which we previously offered limited options. Other coming improvements will expand estimating system offerings, and reduce the time and cost of structural part replacement.”

“They’ve dumbed down the equipment so much,” the manager of Shop B said. In the past, Tesla required the same welders it did in the factory. Now, “some of it, quite frankly,” was “junk.”