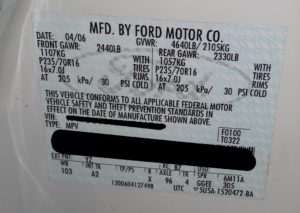 Hearings earlier this month and Tuesday seem to suggest the Wisconsin Legislature will clear up a legal “grey area” and formally grant auto body shops the right to remove and reinstall VIN labels during collision repairs.

Unlike federal law, which carves out an exception for collision repairers, Wisconsin Statute 342.30 declares that only scrap dealers can manipulate vehicle identification numbers. That means that Wisconsin auto body shops which routinely must remove and replace VIN labels to restore mangled vehicles are technically risking a fine of $10,000 and up to six years imprisonment.

Wisconsin Auto Collision Technicians Association (Ltd.) President Larry Terrien in April said authorities and repairers have existed in sort of a “don’t ask, don’t tell” state, and he couldn’t recall any prosecutions. But WACTAL would still like to remove that current “grey area” and “make the law black and white,” he said.

The auto body trade group is promoting Senate Bill 90 and the identical Assembly Bill 144, which would add the exemption that “A person who repairs a vehicle or vehicle part may remove and replace a decal that contains an identification number if the removal and replacement is reasonably necessary for the repair.”

The bills have multiple sponsors in both houses, and this support is bipartisan.

The Senate Committee on Judiciary and Public Safety heard SB 90 on May 9, and on May 12, its five members voted unanimously to support passage.

The Assembly Committee on Consumer Protection heard the bill Tuesday.

“It went well,” Terrien said of Tuesday’s hearing, during which WACTAL presented its case. “… There didn’t seem to be any opposition.”

Assuming the Assembly committee behaves as expected and recommends passage by their peers, the bill should clear the Legislature by late summer or early fall, Terrien said. Whichever measure, SB 90 or AB 144, passes first will immediately be sent to the other house for consideration, he said.

Presuming Gov. Scott Walker, a Republican, then signs the measure, it should take effect immediately.

Featured image: A label for a 2006 Ford Escape shows the vehicle VIN number as well as other information. (Redacted) (John Huetter/Repairer Driven News)