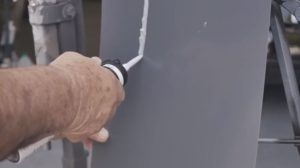 With the number of seam sealers available to collision repairers, it’s important a body shop understand how seam sealers work — and how they should not be used, a spring Society of Collision Repair Specialists video suggests.

The April 4 seam sealer video was the second in a three-part series on corrosion protection. It followed a look at characteristics and strategies for substances like weld-through, epoxy, etch, and aerosol two-stage primers. (See coverage here and here.)

The trick is knowing what seam sealer to apply from the range out there. The panel, which also featured Tim Ronak (AkzoNobel), Kye Yeung (European Motor Car Works) and Toby Chess (Kent Automotive), mentions urethane, epoxy, acrylic and tape seam sealers in the April 4 video.

“There’s a ton, a ton of seam sealers on the market,” Bradshaw said.

Urethane seam sealers dry by attracting moisture — and take longer to dry than rivals like epoxy or acrylic sealers, which have a catalyst to hasten curing, according to Chess.

The urethane sealers might be attractive because of their lower cost — but the shop might make more money overall by turning a vehicle faster with an epoxy or acrylic seam sealer, according to Chess.

The decision as to which type of sealer to use should rely on the answer of the paint department to the question “‘When do I need to get you this car?'” Chess said. If it must be painted that night, a urethane sealer might be a bad bet. If it’ll hit the booth tomorrow, he’d probably use urethane, he said.

Fairly new to the market are tape seam sealers, which Chess said “works great” for areas like door and hood hems.

Unfortunately, “most guys take their fingers and press it down,” Chess said. The substance then stretches and fails, said.

But if a repairer applies the tape seam sealer correctly with proper tools, you “can’t beat it,” Chess said.

Lack of familiartiy with the products and how to use them can be an issue, Yeung agreed. He said that shops often will open a new seam sealer container but not use all of it. The partially used tube is left in a common area for technicians to share.

“The next technician will come along, and look in that box and pick up whatever they see that may work, and use it,” Yeung said. But that technician might not be paying attention a factor like the expiration date or the need to mix the substance with another material, he said.

Yeung called “the biggest abuse I see” when a technician uses a 2K seam sealer with a mix tube on a car without first laying down a four- to six-inch strip of seam sealer on a different surface, such as a piece of cardboard. The seam sealer on the car fails because it hasn’t had a chance to catalyze, according to Yeung. Another abuse, according to Chess: When shops try to save money by spraying seam sealer instead of foam between a door skin and intrusion beam.

“This is just a recipe for disaster,” he said.

Chess praised the I-CAR “Corrosion Protection” CPS01 course, stating that everyone should have the knowledge contained within.

Yeung recommended hanging the product boards some manufacturers provide on a wall so technicians have a quick reference guide and can say, “’That’s what I want to simulate.'” (He said he does this at European Motor Car Works.)

Many manufactuers have training, Bradshaw said — just reach out. Chess noted that some such as 3M, Fusor, AkzoNobel and Kent even have training programs offered in partnership with I-CAR. Not only do you learn about the products you might use in your shop, but a student receives I-CAR credit as well.

“It saves you some money,” he said.

The SCRS videos are quick, conversational and easily digestible, and shops and insurers can check out the corrosion protection trilogy and the rest of series on SCRS’ YouTube channel.

With the number of seam sealers available to collision repairers, it’s important a shop understanding how seam sealers work — and how they should not be used, a spring Society of Collision Repair Specialists video suggests. (Screenshot from SCRS video on YouTube)

In an April Society of Collision Repair Specialists video, European Motor Car Works owner Kye Yeung calls “the biggest abuse I see” with seam sealer when a technician uses a 2K sealer with a mix tube on a car without first laying down a four- to six-inch strip of seam sealer on a different surface, such as a piece of cardboard. The seam sealer on the car fails because it hasn’t had a chance to catalyze, according to Yeung. (Screenshot from SCRS video on YouTube)