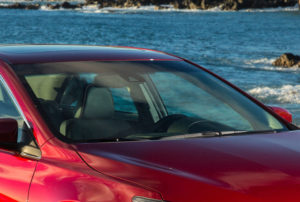 The camera used in Toyota’s Safety Sense suite — now standard on most of the OEM’s cars — might demand that only OEM windshields be used by collision repairers and glass shops, based on the example of a 2016 Toyota Camry presented Thursday.

Toyota collision repair training administrator Agustin Diaz noted to a Guild 21 audience that Toyota’s instructions on reinstalling the lane departure warning camera on the 2016 Camry are worded even more adamantly than usual.

“Our repair manuals ask you to make sure that you use a Toyota genuine part,” he said.

If that bracket is damaged at all on the vehicle being repaired, “replace it together with the windshield glass,” Toyota also states in the 2016 Camry instructions. (Note: Quotes from Toyota repair procedures in this article are all from the nonhybrid 2016 Camry Diaz used as an example. You’ll need to look up the specific instructions for the precise year, make, model and trim you’re repairing before each repair, as OEMs constantly update these steps online.)

“It is important to install this camera the way it was installed at the factory,” Diaz said.

Don’t manhandle your camera or just leave it lying around. “If the lane departure warning camera is dropped, replace it with a new one,” Toyota wrote.

The OEM also warns that technicians shouldn’t touch the camera lens or camera hood, issuing that caution twice in its repair procedures.

Once you have your camera installed on the OEM glass, Toyota has a precise series of steps and conditions you must follow before you can actually calibrate it.

Among them: The car has to basically be drive-off-the-dealership-lot ready. Toyota wants the oil, coolant and tire pressure at specified levels, a full gas tank, and the spare tire and all the “standard tools” in the vehicle. No other people or “extra loads” can be in the car, however. (This raises the question of what you’re supposed do when the customer’s car has some sort of weight-altering modification like a spoiler or aftermarket rims or tires.)

Once the vehicle itself is good to go, the shop must align the front wheels, and then the rear wheels (in that order).

Diaz explained that the sensors are aimed at the centerline, and the thrust angle must be “as close to zero as possible,” he said.

“This is why you need to use OEM parts” and OEM procedures, Diaz said.

The actual calibration is an even more elaborate set of procedures involving targets you print out to the sizes demanded by Toyota, plumb bobs, lot of measuring, a Techstream, and you not sitting in or leaning on the vehicle. To learn more about that and about the other procedures and topics discussed in the article, consult Toyota’s OEM repair procedures.

The point from the 2016 Camry example is that something as common as a windshield R&R on one of the nation’s most popular vehicles can take on a whole other dimension when advanced driver assistance systems technology is involved. This camera’s function helps keep an inattentive driver within their lane and allow a car’s high beams to automatically deactivate to avoid blinding an oncoming driver, according to Diaz.

By definition, a mistake on such active safety technology truly puts the customer’s well-being on the line. It’s not something a shop or insurer should be cutting corners on or repairing without adhering to OEM requirements, whether it’s a 2016 Camry or anything else on the road.

The lane recognition warning camera can be seen between the rearview mirror and windshield on the 2015 Toyota Camry XSE. (Provided by Toyota)