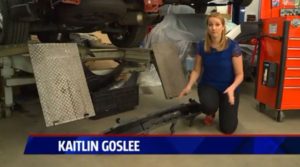 Connecticut TV news station WTIC has warned vehicle owners that an auto body repair estimate prepared using photos alone might not be as accurate as a physical inspection.

“An example here of when there may be more than meets the eye: A photo only showing damage to the bumper, but once that bumper is taken off, damage to the rear body panel, the backup sensor system, also to the exhaust system, all revealed,” reporter Kaitlin Goslee says on the broadcast posted Friday.

The television station reported that Auto Body Association of Connecticut President Anthony Ferraiolo (A&R Body Specialty) and Denya’s Auto Body owner Bill Denya have brought their concerns to the Connecticut Insurance Department. The agency told WTIC it’d look into the issue but hasn’t had any complaints from customers.

Of course, few complaints will materialize if customers don’t know any better. It’s possible that some Connecticut drivers went to shops which blindly followed the insurer’s estimate instead of acting like auto body repair professionals and performing their own damage analysis. Or some policyholders might have just cashed the insurer’s claim check without obtaining a repair at all — not knowing what could be hiding or uncalibrated underneath the damage or that they should have received more money.

Similar to his shop and trade group counterparts in Pennsylvania, who unsuccessfully fought photo estimating in 2016, Ferraiolo tells WTIC a story of a $600-$700 photo estimate that let the customer drive around on an unsafe vehicle — and ultimately missed about $3,500 worth of damage.

“The cars are so complex today that you can’t see all the damage,” Denya told the station.

As carriers have pointed out, there can be a benefit in photo estimating in that it can be harder to steer from a photo claim alone (though this is debatable), and obvious total losses can be deduced as such immediately (particularly once predictive analytics take off). There’s also an argument (which Allstate also made to WTIC) that a physical inspector might miss the same things as the desk reviewer — which is why shops have the supplement process.

But the potential for a photo estimate to miss damage and shortpay a customer seems so much greater than with a physical appraisal, and customers conditioned to handle everything with an app and a selfie really need more coverage like this to keep them informed. Shops might want to use the Connecticut story as a good educational tool in their own state.