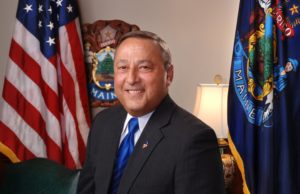 Though the House voted 102-41 last week to override the veto, the Senate’s 20-14 vote for override failed to accumulate the two-thirds margin required to preserve Legislative Document 1540. The bill passed overwhelmingly by the Maine House and by a narrower margin in the Senate earlier this month.

If a domestic or foreign insurer or its agent or employee recommends the use of a particular motor vehicle repair service or network of repair services, the following advisory must be made to the insured or claimant at the time a claim for motor vehicle collision damage is reported:

“You have the legal right to choose a motor vehicle collision repair shop to fix your vehicle. Your policy will cover the reasonable costs of repairing your vehicle to its pre-accident condition no matter where you have repairs made.”

LePage called LD 1540 a “solution in search of a problem” and declared it “micromanages Maine businesses and creates more unnecessary regulations for Maine’s auto insurance industry.”

“If auto insurance companies were truly steering business toward specific collision repair businesses, this may be a discussion worth having,” LePage wrote. “But over the course of the last nine years, Maine’s insurance bureau has only received six consumer complaints regarding this issue; two of those complaints were that insurers did not direct insureds to shops participating in the insurer’s networks.

“Additionally, the Superintendent of Insurance conducted a study of the seven largest insurance carriers in Maine and did not identify any instances of steering.”

These tidbits appeared in testimony for a May 10 Committee on Insurance and Financial Services hearing on an earlier version of the bill. Apparently, LePage only paid attention to one side’s comments, for bill proponents argued that the issue deserved more than the current law.

“Maine has an increasing population of elderly and young drivers who, in the event of an accident, may not be aware that they have the choice of the business to get the repairs done,” Rep. Jonathan Kinney, R-Limington, wrote in prepared testimony for the committee. “These folks are very susceptible to a ‘sales pitch’ for the body shop of the Insurers choice. The claims report scripts section of this bill will create the same expectations for all who file a claim with their insurance companies.”

The Maine Autobody Association testified in favor as well, with attorney Bernadette Bolduc Papi offering links to examples of steering and other states’s antisteering measures.

“The methods used to steer are illegal, sometimes subtle but often blatent, and in disregard for the law in place,” the association wrote. “The insurance companies are interfering with the free market place. Consumers are losing their freedom of choice.” (Emphasis association’s.)