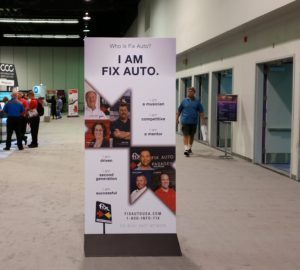 However, Fix Auto USA, which received a license to use the trademark in 1997 and has since grown the brand to 116 collision repair franchisees, vowed to “assertively and legally fight” to keep using the name. President and CEO Paul Gange said in a statement Fix Auto USA expected “to continue operating and growing the Fix Auto brand in the U.S. for the next decade, and longer.”

In 2014, Fix Auto Canada bought Mondofix, the holding company for the Fix Auto brand used by what was then 333 locations, according to Collision Repair Magazine. Mondofix is listed as the owner of the double-arrow Fix Auto trademark filed in 1997 and registered in 1999 with the U.S. Patent and Trademark Office. It also has sought a trademark for the words “Fix Auto,” which was approved for publication June 1 but has not yet been registered. (The PTO publishes a trademark when the agency thinks it’d pass muster, but another party can still challenge the mark until registration.)

“By regaining the rights to our trademark, we are asserting our commitment to the US market,” Fix Auto World President Steve Leal said in a statement. “We look forward to growing the Fix Auto brand in the US by directly pursuing aggressive new strategies that leverage our global track record of elevating the brand and developing insurance channels.”

Leal, Manon Duplantie and Guy Bessette bought the Mondofix brand in 2014, according to Collision Repair Magazine. Duplantie and Bessette left the company in 2015, and the news release Tuesday lists Leal as “owner of the Fix Auto trademark globally.”

“We are in the business of developing trusted consumer brands in the automotive services sector,” Fix Auto World marketing Vice President Carl Brabander said in a statement. “This is an incredible opportunity to add value to both the collision and glass sides of the business, and ultimately provide a more complete service offering to our industry partners and end customers. We look forward to having a direct impact on the success of Fix Auto, NOVUS Glass and Speedy Auto Glass in the US.”

Novus and Speedy Auto Glass give Fix Auto World a more than 230-location foothold in the U.S. — not counting the brand support generated by the Fix Auto USA group.

“We were extremely disappointed to read the Mondofix press release today concerning U.S. operations since it has no basis in fact,” Fix Auto USA Chairman Erick Bickett said in a statement Tuesday. “Mondofix has made its intent clear to usurp the hard-earned equity and loyalty we have built in the United States for nearly 20 years. We will vigorously defend and protect our business relationships from any activity that would affect or injure those business relations.”

The company lashed out at Fix Auto World for its behavior.

“Disregarding contracts and assuming that business relationships may be simply bought and sold in the United States may be the impression of foreign business executives like those at Mondofix,” Fix Auto USA said in a statement. “We believe otherwise. We have worked diligently for many years to not only establish our brand and reputation in the market place, but to deliver on the promises we have made. We still value integrity and fair business practices. We will fight to protect our business and the values we have stood on for so many years.”

Fix Auto World seemed to suggest it might look to someone else to be its “master franchisor” in America, raising the question of what happens to the existing 116 shops franchised by Bickett’s company.

Fix Auto USA has “notified Mondofix that it will be held accountable and liable for any damages incurred by Fix Auto USA or its franchisees as a result of Mondofix’s actions involving the existing License Agreement.” “As the leading global collision and aftermarket services network, Fix Auto’s approach to growing a market consists of either partnering with an experienced local master franchisor or entering the market as the master franchisor, as is the case with Fix Auto Canada, Fix Auto Australia and Fix Auto Germany,” Fix Auto World wrote in a news release. “This regaining of the rights to the Fix Auto trademark will be a major opportunity to directly pursue new growth strategies in the United States, while creating synergies with Fix Auto’s newly acquired companies.”

“The role of a master franchisor is to create value for its members; by aligning our global operations under one strong franchising model, we are better equipped to provide our members with the tools and support they need to evolve with the industry,” Leal said in a statement.

Gange pointed out Tuesday that his company had done pretty well with the brand — Fix Auto USA had grown 135 percent in five years and was near $300 million in yearly revenue.