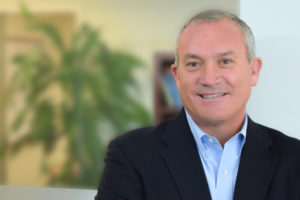 Fix Auto World, which owns the Mondofix holding company controlling the trademark application for the brand name “Fix Auto” and the trademark for the double-arrow Fix Auto logo, on Tuesday announced it would enter the U.S. market itself later this year using the brand.

But Fix Auto USA has operated under a license to use the “Fix Auto” logo and brand in America since 1997. During those two decades, it has spread the brand to 116 collision repair franchisees across the country.

“They just want to steal what we’ve built,” Gange said. His company has vowed to take legal action to preserve its brand.

Gange said he would have preferred to settle the issue privately, not take it public as Fix Auto World had done, but “we’re dug in.” Punch him, and he’d punch back, he said.

According to Gange, Fix Auto USA had the right to use the brand exclusively in America “essentially in perpetuity.”

Later, when asked if franchisees would also remain with the company if the name changed, Gange stressed his confidence the business would legally prevail. “Don’t go too far down that path,” he said. Reached Wednesday about Fix Auto World’s plans for the franchisees, a spokeswoman said the company couldn’t discuss more than what it had said in Tuesday’s news release.

Gange’s business has a relationship with Fix Auto World; the latter’s website directs users to Fix Auto USA shops. However, Gange said it “would be a stretch” to say he had any advance warning of the Fix Auto World announcement.

He also said the company hadn’t really discussed with Fix Auto USA the prospect of being its master franchisor, a business relationship Fix Auto World suggested it might seek to establish with an entity in the U.S.

“As the leading global collision and aftermarket services network, Fix Auto’s approach to growing a market consists of either partnering with an experienced local master franchisor or entering the market as the master franchisor, as is the case with Fix Auto Canada, Fix Auto Australia and Fix Auto Germany,” Fix Auto World wrote Tuesday. “This regaining of the rights to the Fix Auto trademark will be a major opportunity to directly pursue new growth strategies in the United States, while creating synergies with Fix Auto’s newly acquired companies.”

Fix Auto USA itself is an independent company, and even if it were to lose the battle for its name, this wouldn’t affect its 5-year contracts with its franchisees, according to Gange. They’d still be affiliated with whatever Gange’s company ended up calling itself, not with Fix Auto World.

“There’s no transferability,” he said.

Gange said Fix Auto USA’s 116 locations had been notified of the dispute and “we stand united.”

“We have a longstanding, very close relationship with our franchisees,” he said. “They are 100 percent in the loop.” Gange noted that while collision repair is a large industry, “it’s also a very personal one.”

“You just don’t sort of usurp that,” he said.

Direct repair program insurance partners were also supportive and would stand with Fix Auto USA even if it had to change its name, though “that’s not our intent,” Gange said.

Asked if suppliers — with which Fix Auto USA leverages those franchisees’ combined buying power — were also “pretty supportive,” Gange characterized it as beyond “just ‘pretty.’”

Since Fix Auto USA’s launch, “we have spread out throughout this industry,” taking a role in events like the Collision Industry Conference and supporting charities, Gange observed, and support from the industry has been pouring in since Fix Auto World’s announcement, he said.

Collision repair was a very personal industry, he stressed again.

“People are taking this as a personal affront to them,” he said.

The Fix Auto trademark, registered in 1999. (Provided by U.S. Patent and Trademark Office)