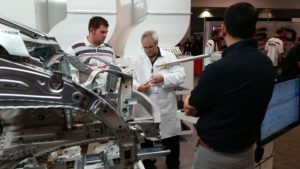 A shop must measure a vehicle in three dimensions every time, without exception, a panel of experts advised on Wednesday’s “Repair University Live.”

This includes the cars whose structure don’t seem to have been distorted by the crash.

“It’s not the big, heavy hits” that trip up a shop when the reinspectors come calling, P&L Consultants co-owner Larry Montanez cautioned. It’s the ones where the shop assumed based on eyeballing the car that it didn’t need measuring, he said.

“There has to be a pre-measure,” he said.

Echoing a presentation by then-Society of Collision Repair Specialists Vice Chairman Kye Yeung last year, Vehicle Collision Experts CEO Mark Olson pointed out that a car hit in the front bumper can sustain damage in the back quarter panel. Vehicles are designed to transfer damage in specific paths away from the point of impact.

A shop has to start on one side of the vehicle and measure all the way to the opposite end, Morgan said. Otherwise, there’s no guarantee the torque boxes were still truly in the correct locations relative to the rest of the car.

Find out strategies for blueprinting and estimating at the SEMA Show in Las Vegas from John Shoemaker, BASF, during “The Basics of Blueprinting”; Matthew McDonnell, Big Sky Collision Centers, “Building a bulletproof estimate through proper documentation”; and Will Latuff, Latuff Brothers Auto Body, “Building a Bigger Estimating Toolbox.” The sessions are part of the Society of Collision Repair Specialists’ Repairer Driven Education Series Nov. 1-4.Register here for the individual classes or the series pass package deal.

Panelists agreed that the shop needs to measure both the upper and lower body. Morgan noted that times in guides often describe starting at the bottom of the car, but the top is important as well.

“It has to be measured three-dimensionally,” Morgan said. A shop can’t just go out with a tram gauge and think the task is done.

A proper measurement also often means removing the wheels, as the car otherwise isn’t keying off a true datum point as it would on the bench, Olson said. (Though some benches are able to compensate for a suspension, Morgan said.) You could measure a car on wheels in the diagnosis or post-repair inspection stages, but it wouldn’t be enough for the actual repair, he said.

Felder mocked the response from shops to advice to measure every time: “‘What if it’s just a key scratch?'”

Even then, according to Montanez and Morgan.

“You have to watch your liability,” Montanez said: Scan the car and measure it.

As it’s not related to the loss, that work wouldn’t be the responsibility of the insurer to reimburse, he said. But whether the shop does it for free or charges the customer, it still was necessary to shield the business from a lawsuit.

The shop has touched the car, Morgan noted — which Montanez indicated gives the customer grounds to sue the shop for any problem on the car, even one unrelated to the vandalism.

“Everything that’s on that car, you own it,” Montanez said.

Felder mocked shops who do hundreds of dollars worth of work for free yet fight “tooth and nail” against measuring a car if the insurer won’t pay.

“The machine’s there,” Felder noted.

A car might need multiple measurements, including one by the estimator, according to Montanez. He mocked the idea of an estimator who does blueprinting and teardown but fails to actually measure the car.

Sometimes, it’s not even that much of an ordeal to conduct preliminary measurements. Olson noted that technology exists to produce quality data even if the operator doesn’t fully understand it.

Felder recommended the Matrix Wand, which relies on fairly simple photography and can easily be taught to an estimator or even a detailer.

The Collision Hub broadcast on structural anchoring and measuring can be viewed here by subscribers to the $30 year-long series (Subscribe here.) Past episodes are unlocked here with a subscription.

A 2017 Chevrolet Bolt body-in-white is used to demonstrate 3-D measurement at the Spanesi booth at SEMA 2016. (John Huetter/Repairer Driven News)