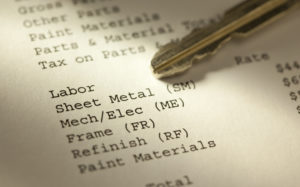 As insurers raise premiums to correspond to increased collision repair severity, it’s important that customers, carriers and policymakers don’t mistakenly look to shops as the source or solution to those charges.

Shops should be following OEM and paint manufacturer repair procedures to repair any vehicle, which means the actual line items on the estimate are technically derived from the OEM instructions for restoring that particular vehicle following that specific collision.

The need for those repair procedures can’t be controlled by a shop which wants to do a complete and proper repair. Deviating from them would open the shop up to liability and mean that an insurer has failed to meet their obligation to restore the vehicle to pre-loss condition.

Thus, a certain baseline severity — doing each line item at cost — is theoretically unavoidable and unattributable to the collision repair industry. Thatcham had the right idea when it called on automakers to develop more affordable repair procedures — though customer and regulatory demands might in turn take some of that decision out of an OEM’s hand.

“The days of repairing vehicles in the same generic manner that we did years ago (are) gone. Completely,” Dorn’s Body & Paint owner Barry Dorn wrote in an email. He noted that insurance carriers seem to be asking “Who Moved My Cheese?” when it comes to modern vehicle repair costs.

“The ones that can’t seem to adjust,” he wrote. “The ones that tell us that we need to ‘upgrade and modernize’ yet deny those very same needed procedures and requirements. Most of this comes from mid to upper level management not allowing the field level adjusters any autonomy to do what is REQUIRED in order to keep all out of legal liability.”

The accompanying parts and paint/materials demanded for these repairs are similarly out of a shop’s hands. If an OEM says a $900 part is replace-only, the shop must order that $900 part and install it on the car or risk the liability of an incorrect repair. If an extra stage of paint is demanded by an OEM, the shop must buy that paint and apply it on the vehicle in many different applications. The cost is the cost to do it right.

What a shop can control is its parts markup and labor rate. But these too — particularly the labor rate — are driven by the shop’s expenses. If a hypothetical shop charges $40 an hour but pays a technician $25/hour salary, $5 an hour in benefits and worker’s comp, and needs $12 an hour worth of equipment, utilities and garagekeeper’s insurance to operate as a business, the shop lost money. At $42 an hour, they break even.

Until the next year, when two new lightweighted vehicle generations demand a shop buy $1 a hour worth of new tools and equipment. Simultaneously, the cost of their tech’s health insurance goes up $0.50 an hour, and the tech wants a $0.50 raise or he’ll jump ship during a labor shortage. Our hypothetical shop is back to losing money unless they raise rates or had charged $45 an hour in the first place.

This makes for a difficult situation during the current bidding war for technicians. Ultimately, the idea of shops courting technicians with huge salaries but failing to raise rates seems unsustainable, Yeung suggested.

“I don’t know how they stay in business,” Yeung said of shops with static rates. Such shops must be “making no money, losing money or cheating somewhere,” he said.

We took a look at how collision repairer labor rates and overall auto body repair increases stacked up against some potential repairer expenses and related items. (For a discussion of the sources for our data sets, check here.) Our analysis started with 2009, the last year we could find consistent labor rates published by CCC.

What we found indicates that shops have seen certain major expenses grow at a larger percentage than labor rates or even overall auto body repair charges.

“The downward pressure is still there” according to Dorn in a subsequent interview, but “the days of us being able to fix that (severity), and monitor that, and manage that” are gone. He described the industry as “in the bones” — there was no fat left. 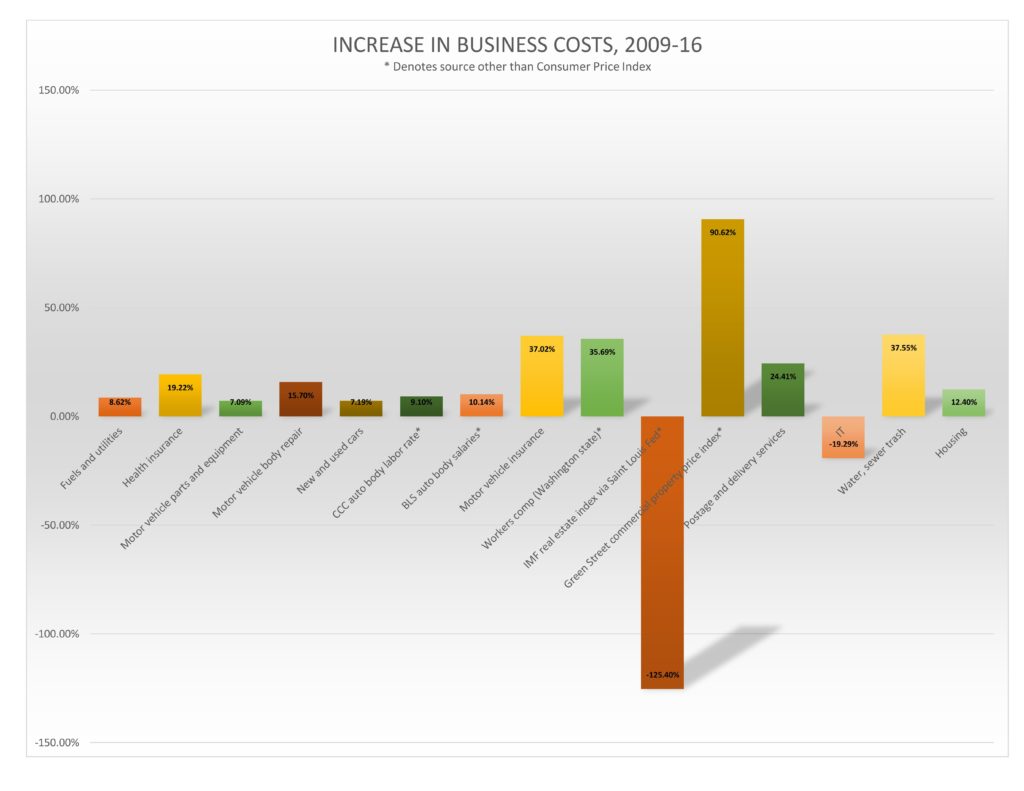 Dorn questioned why shops were even looked upon to subsidize the consumer and insurer on the back end. If a customer chose to buy a car with hundreds or even thousands of dollars in additional features, “it only makes sense it’s going to cost more to insure it,” he said.

“Clearly, the actuaries know that it costs more to repair,” he wrote. “It’s the claims side that doesn’t fully grasp what is happening.”

Not only did shops raise rates less than inflation dictated, they raised rates less than they increased technician salaries — which climbed 10.14 percent during that time.

“I think the industry needs to think about this and rather than remain frustrated they need to ask the question, how can we keep up and maintain our level of service with the ‘race to the floor’ on quality and severity while exceeding training, pay plans and benefits expectation with a very low incoming qualified tech base and an ageing current tech base?” Dorn wrote. “How to do you bring them in? Money? Yes. Years of training them? Yes. Tooling advancements? Yes. This all has to be paid for by someone, this is largely why we have the technician shortage that we have today”

Other collision repairer expenses were climbing at a faster rate than labor rates between 2009 and 2016. Health insurance rose 19.22 percent. Auto body workman’s comp rose 35.69 percent in the only data set we were able to find, Washington state’s.

Dorn said workman’s comp for his Virginia shop rose 55 percent in six years with no claims, and his garagekeeper’s insurance rose 145 percent in eight years. The shop’s cost to provide health insurance to its employees rose 106 percent in 10 years — and now had $5,000 deductibles.

“These are all insurance carriers that have consistently raised their rates to compensate for their losses,” Dorn wrote in an email, calling it “odd how this doesn’t go both ways.” 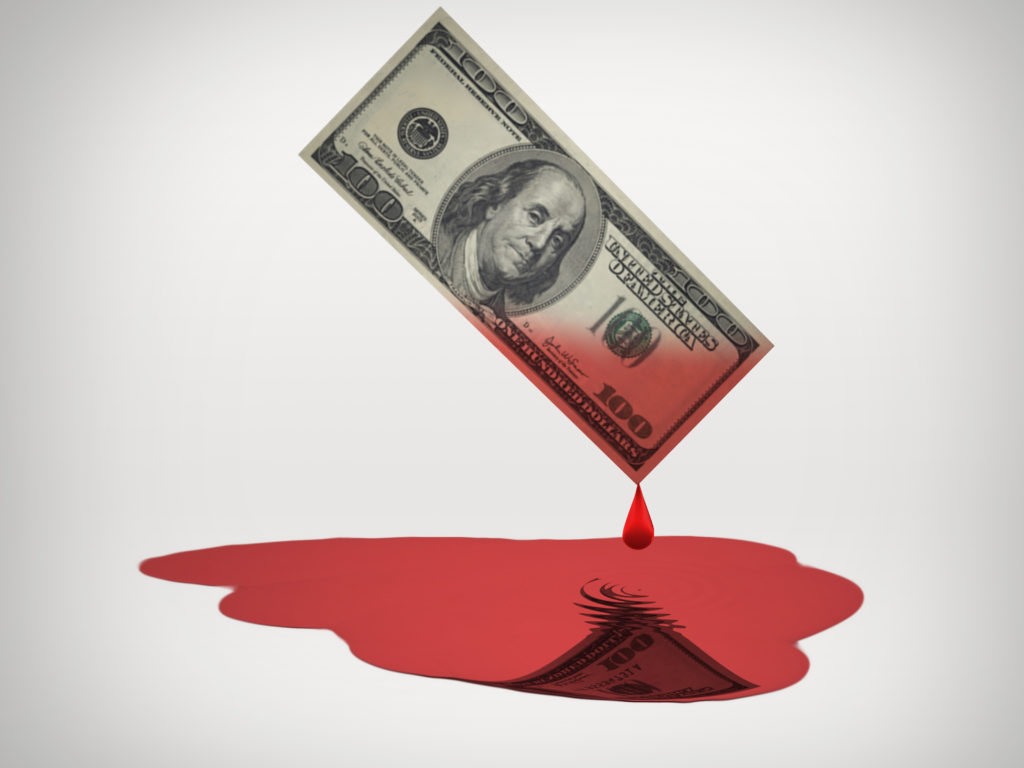 Regardless, it seems pretty clear: Shop owners are giving insurers a deal both on rates and on the entire cost of repair — particularly when you realize carriers raised the cost of auto insurance 37.02 percent during the same time period.

Want cheaper auto body repair? You’ll have to lower the price of everything else first. That, or stick consumers in deadlier but cheaper-to-repair cars. Just don’t paint body shops as the reason for higher repair bills.

As insurers raise premiums to correspond to increased collision repair severity, it’s important that customers, carriers and policymakers don’t mistakenly look to shops as the source of or solution to those charges. (Kameleon007/iStock)

We took a look at how collision repairer labor rates and overall auto body repair increases stacked up against some potential repairer expenses and related items. (For a discussion of the sources for our data sets, check here.) Our analysis started with 2009, the last year we could find consistent labor rates published by CCC. (Repairer Driven News)

We took a look at how collision repairer labor rates and overall auto body repair increases stacked up against some potential repairer expenses and related items from 2009-2016. What we found indicates that shops have seen certain major expenses grow at a larger percentage than labor rates or even overall auto body repair charges. (bestdesigns/iStock)