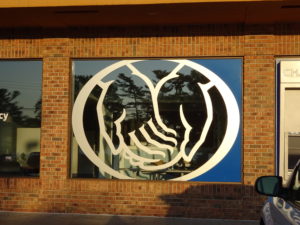 “The improvement in auto insurance profitability is a result of us rapidly reacting to higher loss costs beginning in 2015, and it was aided by declining frequency in the first half of 2017,” Wilson told analysts Aug. 1 in a call to discuss the company’s second-quarter earnings. (Special thanks to Seeking Alpha, whose transcript of the call helped us quickly confirm what was said and check quotes.)

Altogether, Allstate’s brands (which include Allstate, Esurance and Encompass) cut auto insurance combined ratios by 6.5 points to 94.1 — meaning that for every $1 Allstate received in premiums, it only paid out $0.94 in losses and other expenses. Rate increases bumped underwriting profit by $700 million for the first six months of 2017 compared to 2016, according to Wilson.

Allstate investor relations director John Griek said that average auto premium for the Allstate brand of auto insurance rose to $999 in the second quarter of 2017, up 5.6 percent from 2016. However, losses and expenses only rose 0.2 percent, leading to an average of $72 in profit (and not even counting investment revenue from “float”).

“While we continue to selectively file rate increases to keep pace with loss trends, the overall magnitude of rates taken will moderate if the gap between the red and blue line is maintained,” Griek said, referring to the graph from the investor presentation (see slides) shown below: 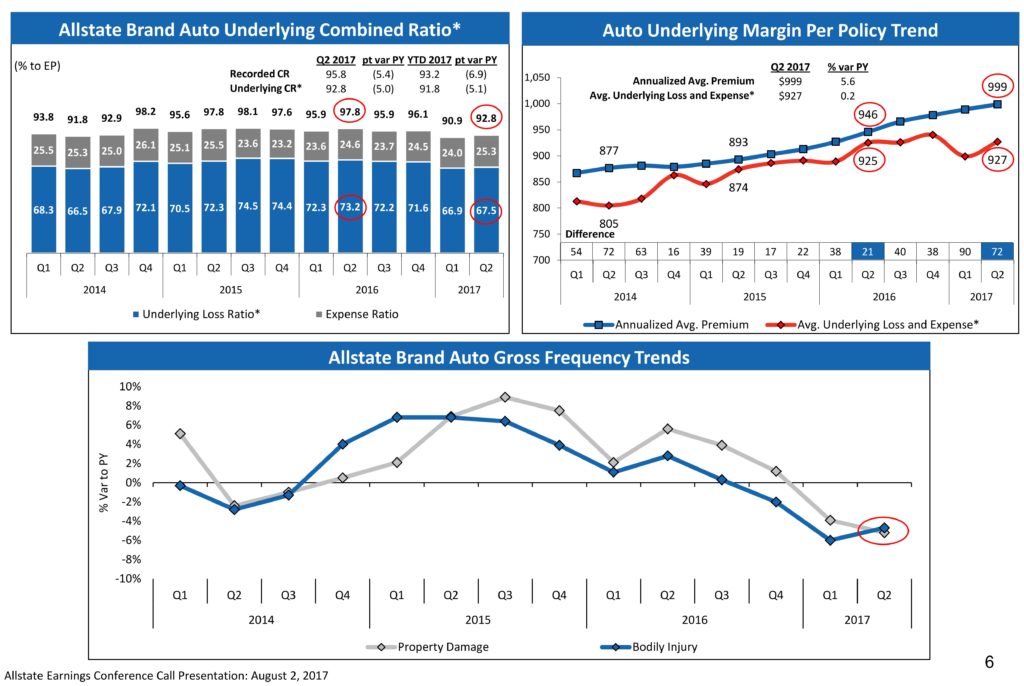 Asked if the beneficial frequency trend would continue, Allstate President Matt Winter said the company had seen “a moderation” — a welcome sight given that at the end of 2016, “it was really unclear what frequency would look like.”

He said that while he couldn’t predict the future, frequency “appears not to be making step-function changes” and behaving more normally. “which is much easier for us to react to and monitor and take appropriate rates for.”

Wilson noted that “frequency and severity typically bounce around by more than a percent a year” — which is a good thing to remember at both DRP and non-DRP shops if adjusters or DRP liasions complain about severity.

Allstate’s large national footprint — it’s No. 3 in auto insurance behind State Farm and GEICO — means that its stats and insights regarding frequency might help both DRP and non-DRP shops forecast their own business.  But the company’s discussion with analysts also offers other Business 101 horse sense shops should remember whenever an Allstate adjuster complains about rates or asks why you’re doing something a competitor doesn’t.

It’s OK to raise prices if expenses dictate: “First, we do think we were out early and taking the price increases that were necessary in auto insurance and that has put us in a position .. assuming these trends continue, we don’t think we’ll have to raise prices as much, which obviously helps because price is a large component … which we compete on,” Wilson said.

Wilson also said Allstate put an emphasis on profitability — another Business 101 concept that might be forgotten by shops pressured to control costs.

In 2015, frequency and severity rose higher than Allstate expected, and “we had to prioritize profitability over growth” — i.e., raise prices — Wilson said.

Companies compete in different ways: Is an adjuster complaining that the guy down the street does it differently than you? That’s OK, following Wilson’s logic.

“(Price is) not the only thing we can compete on, however,” he said, and “there’s a wide variety of ways” to compete.

Asked about competing on price with other carriers, Wilson observed that its strategy depends on what rivals do, and “it’s impossible for us to predict what they’ll do.” Some will subsidize losses, he said, but “we prefer to be on this end of the equation having improved our profitability.”

“I don’t think you can automatically assume that because other people didn’t follow us, that they will follow us or that this is sort of open to buy and it’s easy to take business away,” he also said.