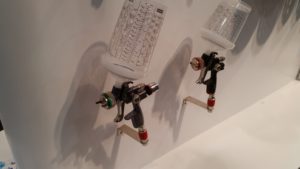 CCC has revised both of its P-pages with new clarifications over what’s included and what isn’t in procedures related to refinishing and the roof headliner.

The changes to the MOTOR and RACED (recycled assemblies) Guides to Estimating are dated August 2017.

Refinishing procedures saw extensive additions, starting with the clarification that painting times “do not include disassembly of components such as Mirrors, Grilles and Headlamps that may come serviced as an assembly.”

Database Enhancement Gateway Administrator Danny Gredinberg said the DEG had received inquiries on this point — see here, here and here — and called it significant CCC included this point for collision repairers to know and consider.

CCC also added entire sections devoted to exotic paint situations, including what to do when a four-stage refinishing process demands another ground coat.

“Some paint manufacturers may use a tinted clear coat in addition to the final non-tinted clear coat,” CCC wrote. “These additional steps are not included and should be considered when developing an estimate using an on-the-spot evaluation. MOTOR does not offer a formula for 4-Stage refinish.”

Shops might see more demand for this complex refinishing. For example, Mazda sells cars with four-stage paint for a reasonably affordable upcharge. Gredinberg called CCC’s addition of four-stage guidelines potentially a way to get “ahead of the curve.”

“That was a really good consideration made,” he said.

CCC also explained that MOTOR’s clear coat formula and refinish times can be used on matte or flat paints as long as the estimator factors in not-included procedures like “an extra clean environment needs to be maintained to reduce air-borne contamination; performing a test spray-out or let down panel to match gloss or lack of gloss; tinting the matte clear to adjust the level of gloss from a paint additive to reduce the gloss level; application of a standard mix clear coat and then sanding the clear coat so the matte finish matches the same texture of the adjacent panels; any additional masking of adjacent panels.”

“These additional steps should be considered when developing the estimate,” CCC added.

Matte painting might not be as common as four-stage paint could become, but “it’s out there,” Gredinberg said. He explained that the new CCC passage referred to using the normal refinish formulas and then adding additional line items for all the extra steps the paint might demand.

“These are all additional,” Gredinberg said. As is often the case with the estimating systems, these variables can only be determined by the adjuster and repairer in the field, he said. (After all, it’s impossible for an IP to know what refinishing operations a specific wreck will dictate.)

The estimating service also offered new guidance for flexible bumpers, declaring, “Bumpers and other flexible components can only receive a maximum refinish overlap deduction of 0.2 hour.”

Gredinberg said this ought to “clear things up more” and remove the potential for a subjective “up-in-the-air decision,” limiting tension between shops and insurers.

Finally, CCC also addressed underside refinishing, stating, “Some component backsides of vehicles may not be refinished; however, the OE replacement component may be supplied in a different E-coat color than the damaged vehicle.”

The RACED version contains all of these refinishing points as well.

The new MOTOR GTE also adds that handling bezels, pads and insulation and transfer wiring are included operations with a headliner — unless one is removing and installing the part. The instructions do not appear to be in the revised RACED guide. Their absence might simply be attributable to the fact that repairers are unlikely to encounter such a scenario anyway.

“The use of a recycled headliner would not be common,” said Gredinberg, a former luxury technician.

Gredinberg also encouraged shops to treat estimating service P-pages like OEM repair procedures and check the online, digital versions of Audatex, CCC and Mitchell‘s instructions on each repair to ensure estimators weren’t working off an outdated version. (A shop referring to a static printout of CCC’s P-pages rather than a dynamic one online or within the estimating software would have missed all these August changes, after all.)

“Those things can change,” he said.