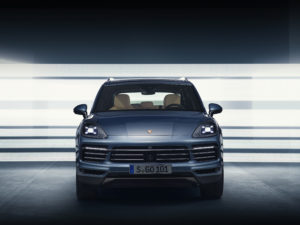 Collision repairers should expect to see more aluminum on the exterior of the third-generation Porsche Cayenne models debuting next year.

Porsche wrote last month that the 2019 Cayenne weighs 143 pounds less than the current Cayenne, “even with extensively increased standard equipment.” (For more on how extra features can increase weight, see here.)

“Following the Porsche 911 and Panamera models, the new body of the Cayenne also uses an intelligent combination of alloy and steel,” Porsche wrote. “The exterior is made almost entirely of aluminum as are the floorpan assembly, front section, and virtually all the chassis components.”

On the whole, it seems like Porsche is using a lot more aluminum this edition. Porsche-certified shops might also want to pay attention to what Jalopnik reported Thursday were some new structures designed to beat the Insurance Institute for Highway Safety’s small-overlap crash test.

The test debuted in 2012 and involves ramming the corner of a vehicle into a structure at 40 mph. It typically requires additional engineering on an OEM’s part to ace besides that needed for a frontal or moderate-offset test — and it adds another element of crashworthiness a repairer must take care to preserve.

Jalopnik on Wednesday toured the body-in-white of the 2019 Cayenne with Porsche SUV body-in-white team leader Rudiger Jahn, and shops won’t want to miss the excellent photos of these protective features accompanying the article.

The 2019 Cayenne will manage collision energy and protect occupants from intrusion with “steel bolstering in the wheel well” paired with “a diagonal member that ties that bolstered wheel well structure into a central longitudinal beam,” according to Jalopnik.

“The idea is that the energy from the crash that pushes the inside of the wheel well will be transferred through that diagonal member, into the strong longitudinal beam, reducing intrusion,” Jalopnik wrote.

The front subframe also “precisely orients the wheel during a crash” to further minimize intrusion, according to Jalopnik.

“If you look at the vehicles that pass IIHS’s rigorous test, you’ll notice that they all turn the driver’s side wheel in a particular way,” Jalopnik wrote.

If shops compromise these new structures during their repair, they’re not only jeopardizing passengers in a crash, but they’re causing the Porsche SUV to drag around up to 110 pounds of dead weight — the amount of mass Jalopnik reported was added specifically for small-overlap collision protection to a SUV it was trying to lightweight. (Ironically, the IIHS doesn’t seem to have ever crash-tested a Cayenne before.)

Other features that might be of interest to collision repairers: The 2019 Porsche Cayenne. (Provided by Porsche)

There appear to be at least two cameras in the grille of the 2019 Porsche Cayenne. (Provided by Porsche)