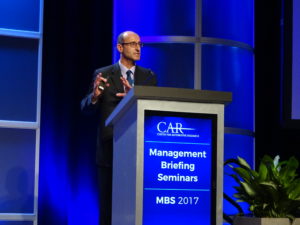 Advances in martensitic and third-generation steels could lead to OEMs using both in future body-in-whites, two experts recently suggested.

Auto/Steel Partnership Executive Director John Catterall said during the Center for Automotive Research’s July 31 Management Briefing Seminars that more than 200 grades of steel were available for car bodies. “Fifteen years ago, there was half that,” he said.

In 1998, experts attempted to design an ultralight steel car. They only used materials in the green bubble of the famous “banana curve” chart seen below — dual-phase steel didn’t even appear on the theoretical vehicle.

“That is not that long ago,” Catterall said.

(For a little extra context into the chart, I-CAR warns that no straightening should be done on any steel with a tensile strength above 600 MPa unless the OEM says it’s OK.)

Third-generation steels, which offer high strength without sacrificing as much elongation were being introduced into vehicles today, and “people in the room” knew as much, Catterall told a crowd fairly certain to include OEM and supplier representatives. He said automakers and the steel industry should collaborate to introduce such materials in cars “as quickly as we can.” 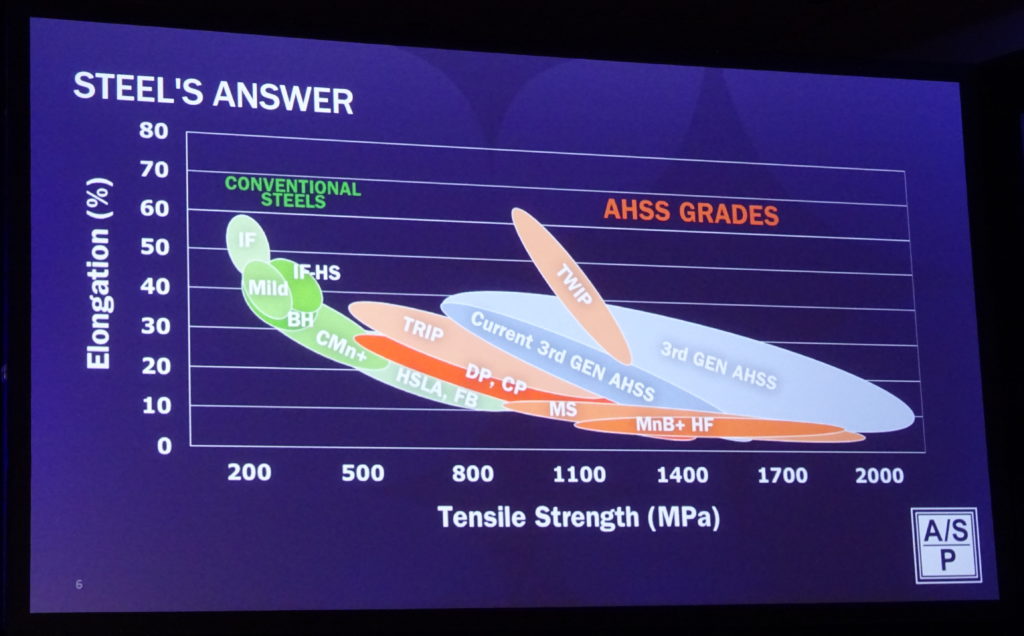 Elongation helps OEMs shape steel into more complicated structures — potentially opening up new areas of the body-in-white which could go higher-strength and further affect structural collision repair. Catterall suggested that the third-generation multiphase steels would be “ideal for crash-dominated load paths,” such as the side structure and front and rear rails.

The project next sought through optimized design to create a vehicle with 35 percent less mass but costing an OEM no more than $3.18 a pound, according to Catterall.

The design team only cut the mass by 30 percent — but that’s because it couldn’t redesign the body side and load paths, he said. An Massachusetts Institute of Technology model projected the cost per pound to an OEM was a mere 32 cents per pound, an “order of magnitude” less than the Department of Energy’s target, according to Catterall.

The researchers were able to cut 46 parts down to 28 as well (Likely in part because of the higher formability), according to Catterall. This would seem to have implications for collision repair and auto insurance severity, as some of the consolidated parts might now be a larger, replace-only third-generation steel structure.

Catterall showed an “roadmap” from the Auto/Steel Partnership of when certain demands needed to be met between a “now” of 2018 and a “later” of “up to 2021.”

“Our members told us they need the answer by this particular date,” he said. 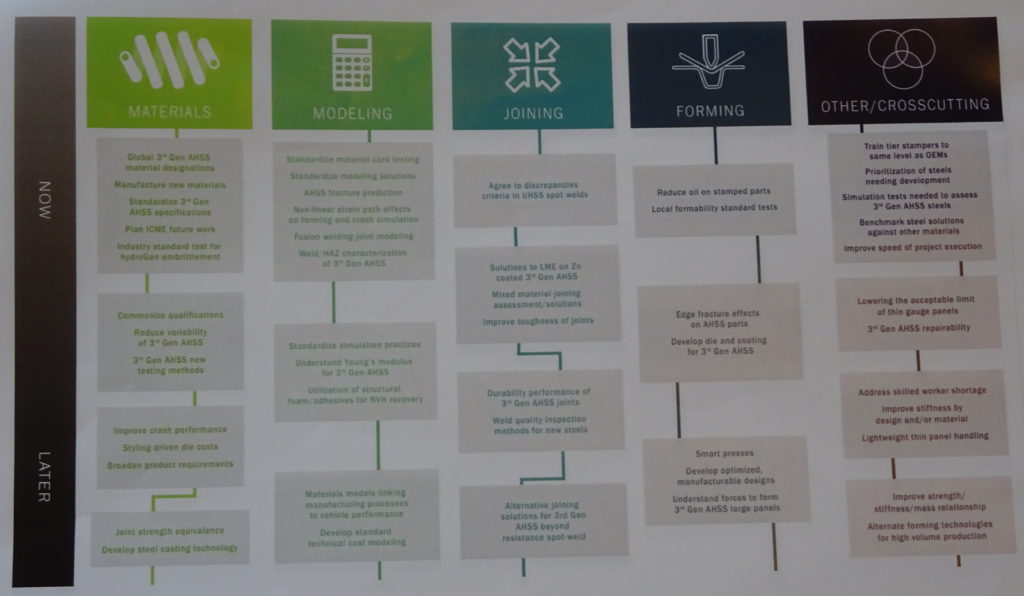 Repairability of 3G steels is presented as a requirement somewhere between those two dates. However, an executive of 3G steel developer NanoSteel has told us that the same considerations would apply for his company’s steels as with any current 2G ultra-high-strength steel — no heat and lots of replacing rather than repair or sectioning.

Though factory demands and production processes are obviously different than the aftermarket, shops might note other aspects of Catterall’s chart which could affect repairability once solved by the OEMs or steel industry. He called repairability a question which cuts across more than one category here.

Müller said it can be work-hardened at the factory to achieve strengths equivalent to boron steel, and can be shaped into such structures as sill reinforcements, seat internal or base structures, 1,400 MPa cold-formed door intrusion beams, roll-formed protection for electric vehicle batteries — and bumper reinforcement beams.

He presented an example of a roll-formed, 1,700 MPa bumper beam with the goal of making it  “as light as aluminum. And they did it.”

The beam was tested by crashing at 6.2 mph with an Insurance Institute for Highway Safety centerline barrier with a 50 mm overlap. It produced similar results as an aluminum bumper beam, suggesting a “cost-effective alternative,” according to Müller. 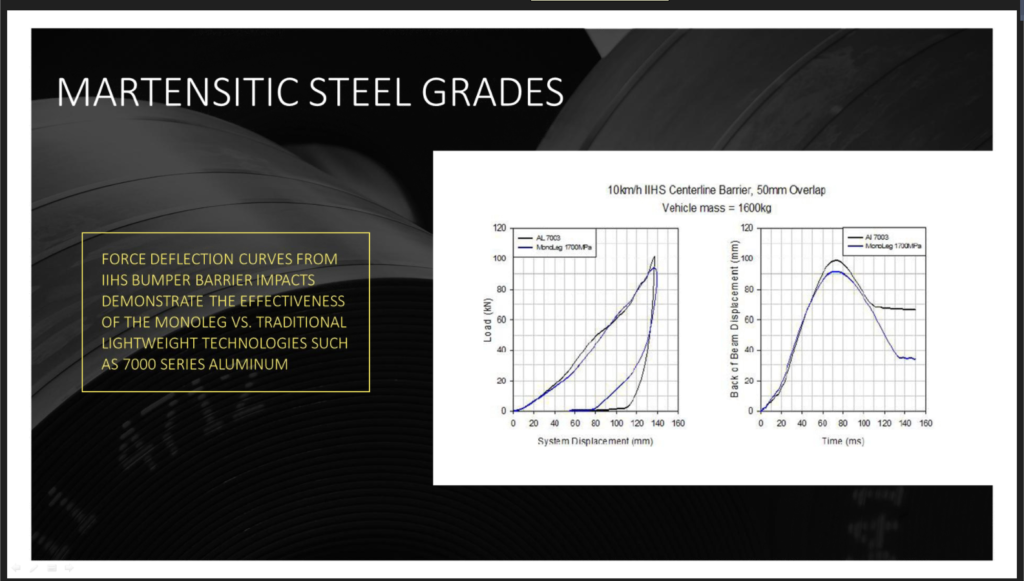 These results and materials could make it impossible for aftermarket manufacturers to compete, though LKQ has said it’s confident they can.

Müller also presented a case study of a 1,200 MPa roof reinforcement 1.5 inches thick. SSAB was asked if the part could be cold-formed rather than hot-stamped.

One issue was the risk of edge fractures given the properties of the part, but SSAB knew it could be done with a martensitic steel, even with 25 percent strain on the edges detected on a simulation, Müller said.

“You can actually upgrade that part, but you cannot downgrade it,” Müller said.

The presentation showed the kind of thought an OEM or steel supplier invest in the parts you fix and illustrate yet again why OEM repair procedures must be followed.

Learn about lightweighting and joining during SEMA with Ken Boylan of Chief at “Current and Future Technologies 2017 and Beyond”; Toby Chess of Kent Automotive at “Adhesive Joining in Modern Repairs”; Dave Gruskos of Reliable Automotive Equipment with “Get Attached to Following Procedures: A Comprehensive Guide to OEM Joining”; and OEM Collision Repair Technology Summit materials experts at “How Automotive Research is Driving Change.” The sessions are part of the Society of Collision Repair Specialists Repairer Driven Education Series Oct. 30-Nov. 3. Register here for individual classes or the series pass package deal, which includes the entire week of classes, all three parts of the OEM Summit and the Nov. 2 Sky Villa afterparty.

Asked what kinds of trends he expected in future body-in-white and chassis designs, Müller said there seemed to be broad agreement that more advanced high-strength steels “will be used in bodies at the cost of mild steels.”

“I think we will see a little bit more aluminum in cars,” Müller said. The auto industry had already moved to mixed-material vehicles, he said, and perhaps it would move more in that direction of the “right material on the right place.” A substrate would be optimized for the particular application — and vice versa, he said.

Still, he predicted the “majority of all cars” would have some form of advanced high-strength steel.

“That will be the big material also in the future,” Müller said.

He predicted that aluminum would be big in the “premium segment,” where “people basically can afford to pay for it.”

But he said he didn’t think it would have a heavy concentration in more mass-market, lower-cost vehicles.

The impetus for such advanced steel lightweighting might be changing, according to Catterall.

He echoed a BMW analysis at the conference that “lightweighting will continue” because of the additional content being stuffed into vehicles. However, with regards to achieving higher fuel economy, the auto industry had reached a point where it could decide on a cost-benefit basis between overhauling the powertrain and lightweighting.