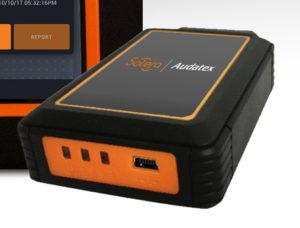 One version of the Audatex Vehicle Health Check device involves a Bluetooth OBD-II dongle which feeds data into an app on a technician’s smartphone or tablet.

Another version, the VHC Technician Kit, also throws in “a ruggedized and warrantied” tablet and access to Identifix DirectHit and its library of OEM documents and “millions of industry confirmed fixes.” According to Audatex, more than 60,000 repair facilities have contributed to Identifix.

Users of the Technician Kit also receive access to the International Automotive Technicians Network message board leveraging more than 80,000 technicians’ knowledge; a repairer can also pay to use the the actual Identifix repair hotline.

“Since I’ve been using Identifix, the shop’s diagnostic time has been cut by at least 70 percent,” Miner’s Auto Repair owner Rick Miner said in a statement. “The great thing about Identifix is that it helps us zero in on the system causing the problem, and with the added OEM features, I have all the information I need in one place.”

Audatex also stressed the relevance of the Health Check product to the collision repair industry.

“The collision industry is facing an emerging landscape where the complexity of electronic systems diagnostics and subsequent repairs are superseding that of the hard parts, requiring new tools and solutions to stay accurate and efficient,” Audatex wrote. “Extending beyond typical code reading technology, estimators and technicians need to understand probable causes and proven repairs in order to reduce expensive and timely sublet operations.”

Audatex’s latest revision to its Database Reference Manual, dated Sept. 18, declares scanning and calibration to be not-included, manually entered procedures. It also states some of the OEMs’ demands with regards to diagnostics.

“As the growing population of smart cars and ADAS equipped vehicles (Advance Driver-Assisted Systems) escalates, so does the need for an advanced solution to properly diagnose the systems when those vehicles have been in an accident and require electronics or mechanical repair,” Audatex collision repair services Vice President Don Mikrut said in a statement. “This Vehicle Health Check provides the automotive repair industry with the ability to confidently scan, diagnose and confirm the full health of those cars’ electronics.” 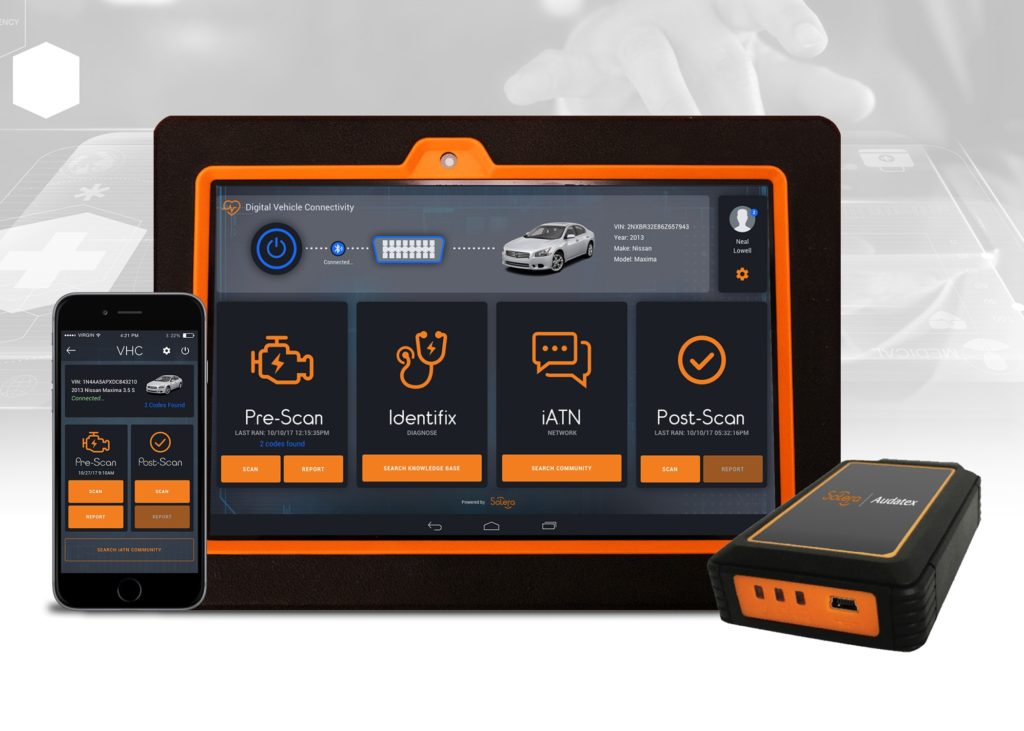 Cris Hollingsworth, Solera global general manager for service, maintenance and repair and enterprise, said the Health Check system was a first for Audatex in the U.S. in terms of its “breadth and depth.”

The company hasn’t yet released pricing. “We feel that we’re going to be very competitive in the marketplace,” Hollingsworth said.

Hollingsworth said it would be a “full-service subscription model” which would be all-inclusive; shops wouldn’t have to pay separate data update fees in the manner of some Health Check competitors, he said.

Solera teamed up with Launch Technologies on the Technician Kit’s tablet. However,  Hollingsworth couldn’t disclose the company behind the Bluetooth dongle except to note that Audatex had a “very deep exclusive on that device.”

Mitchell partnered with Bosch for the hardware and software of its “Mitchell Diagnostics” scan tool was done in conjunction with Bosch, but Hollingsworth said Vehicle Health Check uses Solera’s own software.

“This is our software solution,” he said. Solera’s program reads and interprets diagnostic trouble codes and provides a “well-structured diagnostic pre- and post-scan report” which provides both the DTC and the probable cause, and the fix likely required — “really the claim to fame of Identifix in the industry.”

Identifix’s database of OEM procedures is more comprehensive than what Audatex TechFocus offers collision repairers, as the former’s meant for the entire automotive aftermarket, according to Hollingsworth. Identifix also identifies all the real-world repair solutions uncovered by mechanics as well, and the iATN message board can help diagnose the “really tough to solve for” complaints through crowdsourcing.

“We’re giving you really the best of both worlds,” Hollingsworth said.

As with other third-party scan tools, Solera’s OS licenses OEM diagnostics information. This puts it and the other scan tool manufacturers — and the repairers using them — at a slight disadvantage, for the third-party tool might not be able to scan a late-model vehicle immediately in the manner of an OEM. (On the other hand, it’s possible that an Identifix mechanic troubleshoots a problem and finds the fix before the OEM service procedures appear.)

For much of the aftermarket, this is less of a concern — vehicles typically never visit an independent mechanic until they’re out of warranty, giving scan tool manufacturers time to get the diagnostic information. For collision repairs, it’s possible to see a brand-new, current-model car that got in an accident the second it drove off the dealer lot — and the OEM tool the only device prepared to scan it.

“That’s a gap that no one has solved yet,” Hollingsworth said. However, Identifix does have OEM repair information for 98 percent of all vehicles on the road, dating back to the 1992 model year, he said.

Unlike Mitchell, Audatex opted not to provide reprogramming or recalibration capabilities — only diagnostics. It decided to “leave that with the OEs” rather than risk liability, Hollingsworth said, noting that he “wouldn’t want to be the shop” which reprogrammed or recalibrated something only to have it work improperly or injure somebody.

“It’s risk,” Hollingsworth said. While Audatex might integrate these features in the future, “it’s just not ironed out well enough yet,” he said.

Asked if Audatex would indemnify shops if its scanning software missed something detectible in the OEM scan tool, Hollingsworth answered, “Nobody can.”

If someone was willing to do so, “please refer them to me,” Hollingsworth joked.

Audatex’s announcement leaves CCC as the only major estimating service without its own branded diagnostics device.

“No, CCC is not selling a branded scan tool,” CCC Vice President of market solutions Mark Fincher said in a statement Wednesday. “Our approach is to offer the market an open platform that connects repairers with a variety of diagnostics solutions so they can choose the provider(s) they want to work with and best support the needs of their business.”

CCC last week announced a new way for CCC ONE users to receive data from multiple other companies’ scan tools, including OEM devices and telematics-based diagnostics.

“Easy access to multiple scanning solutions is critically important for the collision repair community and our ability to properly and efficiently diagnose vehicle damage,” LaMettry’s Collision operations President Darrell Amberson said in a staetement.“We applaud CCC for developing a solution that will enable us to use the solution(s) that are best for our business and the job at hand.”

Shop and insurers could both have records of the work that had been done, the information provider said.

“The interface will enable CCC repair facility customers to view the results of diagnostic scans from their selected solution provider(s) directly in CCC ONE, significantly improving the efficiency and transparency of collision repair scanning,” CCC wrote in a news release. “Repairers using the solution will have the ability to share the results of their vehicle scans with insurers on CCC ONE, providing a verifiable record of the scan completed by the repairer. Notably, the interface will be available to OEM scan tool providers, aftermarket providers, and even telematics-based diagnostics solutions.”

Mitchell similarly in June touted the integration of its scan tool device’s outputs with its own estimating and shop software. It announced a similar capability with asTech on Oct. 31.

He said he couldn’t disclose the company’s future plans, simply hinting, “You can get an idea of where we’re going.”

However, Vehicle Health Check’s features still could help shops and insurers from a process perspective.

“Everybody can win here,” Holling said.

Data is stored in a cloud and accessible by the carrier and repairer responsible for the particular claim’s resolution. VHC also conducts a VIN scan, a feature which proves the data came from the claimant’s vehicle and therefore can help smooth the process of a shop getting paid, according to Mitchell.