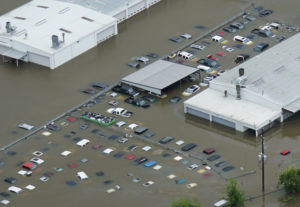 Zarcone told analysts on a quarterly earnings call Oct. 26  (see Seeking Alpha transcript here) that the company ought to be able to purchase “high-quality” vehicles with an higher average revenue.

“It’s not like the front end is gone or the back end is gone,” he said.

He noted, however, that LKQ “can’t buy it all” because of space considerations, nor could its competitors.

So this suggests that salvage yards nationwide will be able to get in on the trend. Zarcone told insurers “there’s not going to be massive changes, massive gains” from the new inventory but the auto recycling industry ought to benefit a little for the next several quarters.

Esurance observes that a car flooded by freshwater is an “obvious total loss” if the water reaches the dash, but a seawater-flooded vehicle only needs to reach the rocker panel before it’s an obvious total. I-CAR also advises that establishing the height of the floodwater “is one of the key factors” in determining repairability; it also notes that length of submergence also can determine repairability.

While freshwater is more forgiving to a vehicle than salt water, I-CAR has noted that such floodwaters might still affect components besides the obvious electronics. It also observed that fresh flood waters might have dirt and silt that can wear on moving parts, and body damage can occur if the vehicle is pushed by the flooding. “We’re not going to sell an engine that’s been water logged and flooded  as a useable and quality replacement part,” he said in a statement.

He said that in a catastrophe, insurers would be inclined to total a vehicle for less damage than water completely submerging the engine and/or transmission.

“Every car has not been submerged in water” Fortner said in a statement. Water might merely have reached the center (or above) of the wheels or up to floor level — and the latter circumstance is when insurers “tend to get more concerned about repairability of the vehicle.”

Asked if LKQ excludes electronics from sale that may be damaged in flooded cars, Fortner said, “Exactly.” Any computer module affected, “we’re coring or tossing those out,” he said in a statement.

What about lamps and elements which might have water inside? Fortner pointed out that headlights are “a sealed unit,” and LKQ provides a lifetime warranty on any nonmechanical part anyway. Mechanical parts on flood cars receive the usual standard warranty accompanying any other LKQ mechanical part.

“Our warranty is consistent and readily available on our website ” he said in a statement.

Asked how a repairer or a DIY customer would know the kind of conditions leading a vehicle to be totaled or sold for salvage — be it flooding, a collision, or simply a trade-in so depreciated it was broken up for parts — Fortner said LKQ’s parts invoice reflects the VIN number of the donor vehicle.

Essentially, the repairer, mechanic or DIYer would take that VIN and look up the history themselves. In other LKQ parts news, Zarcone reported that the company’s Intelligent Parts Solutions initiative with CCC saw revenue grow 21 percent and purchase orders grow 25 percent in the third quarter. Zarcone cautioned analysts that such sales were only “a small part of our North American revenue.”

Vehicles are flooded in the aftermath of Hurricane Harvey. (Karl Spencer/iStock)