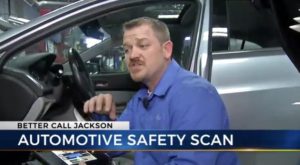 A Columbus, Ohio, television network has warned consumers about a possible threat to their warranty should they forgo a diagnostic scan of their vehicle.

The piece by “Better Call Jackson” reporter Mike Jackson advises consumers that “if your car’s only a few years old, regardless of its make or model,” it needs a scan after even a “minor mishap” because of the electronic systems inside. (Technically, electronics issues not represented by a dash light date back to at least the 1990s, but as the focus is on factory warranties, we’ll let this one slide.)

“Almost all of us have that in our cars now,” anchor Colleen Marshall notes of vehicle electronics in the WCMH video.

The WCMH segment features Rife’s Autobody manager Mike Troxel, who describes how some insurers will pay for a scan with documentation — while others will acknowledge that the OEM says it’s necessary but “‘we don’t feel that it really does'” because of an absence of a dash light.

Troxel said he can understand the insurers’ hesitation from a cost perspective, but “as a safety (concern), I don’t understand that.”

We should also point out that it’s been nearly a year and a half since OEMs very publicly started explaining the need and reason for scanning. There’s really no excuse for adjusters to plead ignorance or dash lights anymore, nor is there any excuse for the carrier training programs to send them out in that condition.

Jackson reports that the scanning bill can be as high as $220 — potentially a reference to the $169 pre- and post-repair scan package for the asTech featured on the broadcast plus Rife’s Autobody’s markup. (The broadcast also seems to erroneously assume that the asTech model is the only way to scan a vehicle after a collision.)

But Jackson encouraged viewers and Marshall to pay for the costs of diagnostics out-of-pocket if the insurer refuses to pay. Otherwise, if something goes wrong with an under-warranty vehicle, the OEM might scan the car, determine that the issue dated back to the collision and refuse to honor the warranty, he says.

“You should pay for it,” Jackson tells Marshall. “… It could come back and haunt you later.”

Flaws aside, the piece should be useful to collision repairers in Ohio and beyond as a tool for educating customers and insurers — or even more embarrassingly, the shop itself.