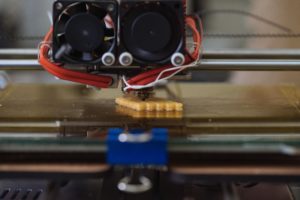 3-D printing still has far to go before it reaches the average collision repairer, but a couple of recent announcements hint at the additive manufacturing possibilities for the industry.

Stratasys 3D said last week that Skorpion Engineering used its six Stratasys 3D printers to crank out large, “complex automotive prototypes” far faster than the usual techniques like clay models. The FDM 3D printers are for speed, able to spit out a part in a day, while the PolyJet 3D printers allow for precise, complex shapes, according to Stratasys.

Fewer customers want clay; they want “high-performance prototypes” — and in less time, according to Stratasys.

Stratasys wrote that Skorpion used a Fortus 900mc Production printer and its “large build tray” to generate a “full-sized car bumper” fascia 50 percent faster than would have occurred with clay.

“In the context of the end-to-end manufacturing workflow, the level of time-saving enjoyed with 3D printing isn’t merely improvement or progression – it’s transformational,” Skorpion general manager Italo Moriggi said in a statement. “In fact, with 3D printing we can send prototypes to our customers the very next day.” Prototypes obviously are different animals than real parts, but what Skorpion’s able to do now seems to point to a future where replacement auto body parts are printed on demand rather than mass-produced and stored somewhere. At the least, it hastens the appearance of new automotive shapes.

“Crucially, this ability to produce fully-functional parts with improved performance allows our customers to undergo aesthetic and functionality verification significantly faster,” Moriggi said in a statement. “This directly enhances their overall production cycle and helps accelerate their time-to-market.”

Skorpion and Stratasys hinted at future printing that went beyond the prototype stage and delivered actual production parts.

“As we continue to push the prototyping capabilities of our 3D printers, we are discovering the wider manufacturing potential they possess,” Moriggi said in a statement. “In fact, our goal is to utilize additive manufacturing to realize the production of a fully-functional concept car within the next five years.”

“Skorpion Engineering is the perfect example of how a number of future-ready companies are not merely exploring the use of our complete 3D printing solutions to solve traditional prototyping challenges but are discovering the unparalleled capabilities for the manufacture of final parts,” Stratasys materials business unit Vice President Zehavit Reisin said in a statement. “This demonstrates how Stratasys applies purposeful innovation to customers’ goals and aspirations.”

Skorpion also used additive manufacturing to generate “a highly-accurate vehicle dashboard in one print” with both hard and soft areas, Stratasys wrote. Lonnie Love, Oak Ridge National Laboratory fellow and group leader, told a Center for Automotive Research Management Briefing Seminars audience this summer that 3-D printing held the most potential when it came to tooling, as durable, complex shapes can be generated far more quickly and cheaply than under traditional methods.

He said the idea of fully 3-D-printed, mass-produced vehicles in the Local Motors model was potentially 10-20 years in the future.

However, while arguing that a lack of crash testing could be an issue for a fully 3-D printed car, Love was supportive of the potential for 3-D printing replacement parts.

Oak Ridge partner AGCO has a million part numbers — and 30 percent of them sell fewer than one a year, according to Love. The company would like to get its inventory to the point where it “isn’t a massive facility, it’s a data center. You just print out as you need it,” Love said.

Also noteworthy was Rice University and the University of Campinas, São Paulo (Brazil)’s use of 3-D printers to convert algorithm-generated data into “strong, light and durable materials with complex, repeating patterns.”

Rice wrote in a news release Nov. 16 that the “schwarzites,” thought up in the 1880s by Hermann Schwarz and still primarily theoretical until now, could be used for “high-load-bearing, impact-resistant components” in cars — a collision repairer’s bread and butter.

Postdoc Chandra Sekhar Tiwary said the structures were like seashells, which have a complicated geometry which protects the soft creature inside.

“The theory shows that at the atomic scale, these materials can be very strong,” he said in a statement. “It turns out that making the geometry bigger with polymer gives us a material with a high load-bearing capacity.”

Even more interesting from a collision repair perspective, Tiwary said the schwartzites break exactly how one would like them to break.

“The way a material breaks is important,” Tiwary said in a statement. “You don’t want things to break catastrophically; you want them to break slowly. These structures are beautiful because if you apply force to one side, they deform slowly, layer by layer.

“You can make a whole building out of this material, and if something falls on it, it’s going to collapse slowly, so what’s inside will be protected.”

The printed version was able to match the atomic model to some degree, according to Rice. “It is a little surprising that some atomic-scale features are preserved in the printed structures,” University of Campinas professor Douglas Galvão said in a statement.

“In tests, both transferred loads across the entire geometry of the structures no matter which side was compressed,” Rice wrote.

The scientists are planning to try and reduce the amount of polymer used so the structures can be even lighter. “In the far future,” the researchers might try and print the parts out of metal or ceramics “on a grander scale,” Rice wrote.

“There’s no reason these have to be blocks,” Rice grad student Peter Owuor said in a statement. “We’re basically making perfect crystals that start with a single cell that we can replicate in all directions.”

A 3-D printer generates a “schwarzite,” a type of structure thought up in the 1880s by Hermann Schwarz but still primarily theoretical since then. (Brandon Martin/Rice University)

Stratasys 3D wrote in a news release that Skorpion Engineering used a Fortus 900mc Production printer and its “large build tray” to generate a “full-sized car bumper” fascia 50 percent faster than would have occurred with clay. (Provided by Stratasys 3D via Business Wire)

Stratasys 3D wrote in a news release that Skorpion Engineering used additive manufacturing to generate “a highly-accurate vehicle dashboard in one print” with both hard and soft areas. (Provided by Stratasys 3D via Business Wire)