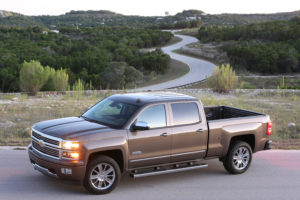 Citing anonymous sources, the Wall Street Journal reported Wednesday that the next generation of General Motors pickups will be mixed-material, with a high-strength-steel cab safety cage and aluminum doors.

The newspaper also reported that higher-end versions of GMC Sierra and Chevrolet Silverado trucks could feature carbon-fiber. The article describes carbon-fiber beds in its opening paragraph but then references a “carbon-fiber box.”

According to the WSJ, GM will reveal the next-generation 2019 Silverado and GMC Sierra soon. In 2019, they’ll begin selling higher-end versions with the carbon-fiber available, the newspaper reported.

Body shops should be somewhat prepared for the idea of carbon-fiber-reinforced plastic truck beds with last year’s launch of the 2017 Honda Ridgeline’s composite structure.

In Honda’s case, the Ridgeline bed’s resin is reinforced with fiberglass rather than the more expensive carbon fiber Chevrolet and GMC will reportedly use. However, the Ridgeline’s bed still ended up being pretty strong; the OEM in 2016 memorably mocked both Ford and Chevrolet in 2016 by showing off the composite bed’s durability compared to the aluminum F-150 and steel Silverado beds.

Repairers fix the Ridgeline’s two-piece bed floor and composite side vertical panels by replacing any damaged parts. That would seem to be a logical way to handle a carbon-fiber Silverado bed.

Shops might also get some sense of what GM will do with regards to a carbon-fiber bed by recalling the OEM’s Chevrolet Silverado Cheyenne concept truck from the 2013 SEMA. That vehicle took the then-next-generation 2014 Silverado and cut another 200 pounds with “carbon fiber replacements for the bumpers, tailgate and inner cargo box.” The carbon-fiber box had 6-foot-6 dimensions.

“Elements such as high-strength steel in the frame and body structure are found on all production models, while some also feature aluminum suspension components, contributing to the Silverado’s everyday performance,” Chevrolet marketing Vice President Chris Perry said in a 2013 statement. “With the Cheyenne concept, we’ve taken the low-mass concept to a new level – with exciting results.

“It is only a concept right now, but we are continually exploring new ways to give Silverado customers more.” As far as the other lightweighting referenced in the WSJ report goes, a couple of things come to mind:

The use of aluminum in the doors of the No. 2 vehicle and No. 17 vehicle in America (according to GoodCarBadCar) might be the writing on the wall for shops who hadn’t yet upgraded to accommodate the metal.

And in terms of what the steel portion of the vehicle might look like, here’s the cab of the 2015 GMC Canyon/Chevrolet Colorado as presented at Great Designs in Steel. About 72 percent of the structure is advanced- or ultra-high-strength steel, which basically means no heat — and in some cases, no cold repair — and specific sectioning rules. And that’s a vehicle for the 2015 model year; just imagine what a GM with four more years of metals advances might do with the Silverado/Sierra. A 2014 Chevrolet Silverado High Country, the top of the Silverado line, is shown. (Copyright General Motors)

The bed and inner panels on a 2017 Honda Ridgeline are all extremely modular, a June 2016 Honda Body Repair News states. (Provided by Honda)

The 2014 Chevrolet Silverado Cheyenne concept at the 2013 SEMA had a carbon-fiber inner box, tailgate and bumpers. (Copyright General Motors)

Ultra-high-strength steel on the 2015 GMC Canyon/Chevrolet Colorado of at least 1,000 MPa can be seen here in red and yellow at Great Designs in Steel 2015. (John Huetter/Repairer Driven News)