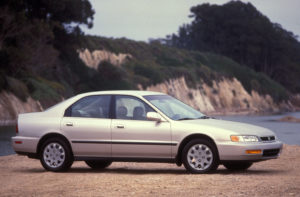 Formally confirming something a representative said publicly last year, Honda updated its scanning and calibration position statement to make it clear that even 20-year-old vehicles need to be scanned.

The October version of the mandate ought to silence any insurers seeking an out to avoid paying for a procedure that experts and common sense dictate should have been done for years. It also suggests a logical answer for insurers demanding greater specificity on what “scan all vehicles” means for any OEM.

Honda declared that “all vehicles” means every Honda and Acura dating back to at least the 1996 model year and a few older ones. Some 1994-95 Hondas and Acuras have a 16-pin OBD-II connector and will also need a scan, as will 1992-95 Honda and Acuras with the older three-pin connector, Honda wrote.

Honda seems to key off of the existence of a diagnostic port to determine if a car should be scanned. Such a “no duh” proposition — diagnostic port = diagnostic scanning needed — would seem to be a useful baseline assumption for shops and insurers about the population of scanworthy vehicles for OEMs who haven’t formally specified a range of model years. (Subaru, for example, only demands scanning back to 2004 cars.)

The OBD-I vehicle diagnostic standard started in the 1980s, became law in California for the 1990 model year and was expanded nationwide shortly after that through a 1990 law. The OBD-II standard became mandatory for the 1996 model year.

When a dealership received a vehicle, SOP was “you check codes.”

“That’s been standard for almost 30 years now, that you have to do that,” he said.

“The proliferation of electronic control systems has increased the number of potential DTCs beyond the point where a dashboard indicator can be installed and/or illuminated for every DTC. Dashboard indicators are intended for driver notification, not vehicle diagnostics,” Honda’s position statement states. ” … the presence or absence of dashboard indicators/warning lights is not an acceptable method to determine if post collision diagnostic scans are necessary.” (Emphasis Honda’s.) The 1996 Honda Accord is shown. (Provided by Honda)

The 1996 3.5-liter Acura RL has MIL lights, but it still needs to be scanned, according to Honda. (Provided by Honda)