Following criticism and a $200,000 fine from the California Department of Insurance related to alleged violations including the use of obsolete labor rate survey data, GEICO has been conducting a new poll of body shops’ charges.

Until that study is done, GEICO must adjust its 2013 survey — the last one on the state’s books — by the California inflation rate of 3.83 percent, the CDI required in an August 2016 settlement.

The state reiterated these conditions from the 2016 CDI-GEICO settlement in a letter last month to North Ranch Bodycraft, who shared the document.

“Until the new Auto Body Labor Rate Survey is completed, if you are aware of any information that suggest GEICO’s survey is flawed (other than due to its age), please provide us with such information so we may investigate and address those concerns,” CDI associate compliance officer Jairo Flores wrote in the Nov. 20 letter.

GEICO denied the alleged labor rate survey violation and other state claims in its August 2016 settlement related to the CDI’s investigation of 153 complaints against the carrier between Jan. 1, 2014, and June 1, 2015. The state also alleged a pattern dating back to at least 2006 of GEICO failing to comply with state regulations on determining a prevailing rate.

“Among the allegations, Commissioner specifically alleged Respondents adjusted repair estimates without having conducted a labor rate survey to determine the prevailing labor rate in the area or provided any other evidence or support that its adjustment of the repair shop’s estimate was reasonable,” the CDI wrote about a 2006 statement of charges.

The CDI noted that GEICO then tried to use an allegedly noncompliant labor rate survey, got challenged for it by the state in 2008, and ultimately agreed in 2010 to pay $10,000 and knock off such practices. GEICO apparently kept its nose clean until around sometime in 2014-15 when it allegedly used the outdated 2013 data, according to the CDI.

The moral of the story: If an adjuster from GEICO or any other insurer has fought you on your labor rates in violation of the letter or spirit of California’s regulations, it’d probably be a good idea to point them to the North Ranch letter and the 2016 enforcement action. (And perhaps to have the CDI on speed-dial.)

Don’t forget as well that California effective early this year tightened its labor rate survey rules to propose a market as a mile out from a six-surveyed-shop area. Survey rates must be provided by the shops themselves; an insurer can’t base the results on past estimates or estimating software. No DRP rates count — only door rates.

The new regulation also demands all insurers who perform surveys to update them at least every 28 months, and during that time adjust the labor rates by the California inflation rate. A shop can still negotiate a lower or higher rate with a carrier, but the shop can’t be compelled to accept less than the lower of the market or their door rate. If a carrier hasn’t conducted a labor rate survey, that’s fine. But it must then accept the shop’s door rate or “reasonably adjust the estimates prepared by the body shop of claimant’s choice.”

Despite the apocalyptic warnings of carriers following the new labor rate survey rules, shops haven’t run wild with rate increases in estimates tracked by San Diego, Calif.-based Mitchell. The average California labor rate rose 2 percent from 2016 to $56.75 as of the end of the third quarter, Mitchell reported. (Of course, not all the rates in Mitchell’s database are going to be door rates.) 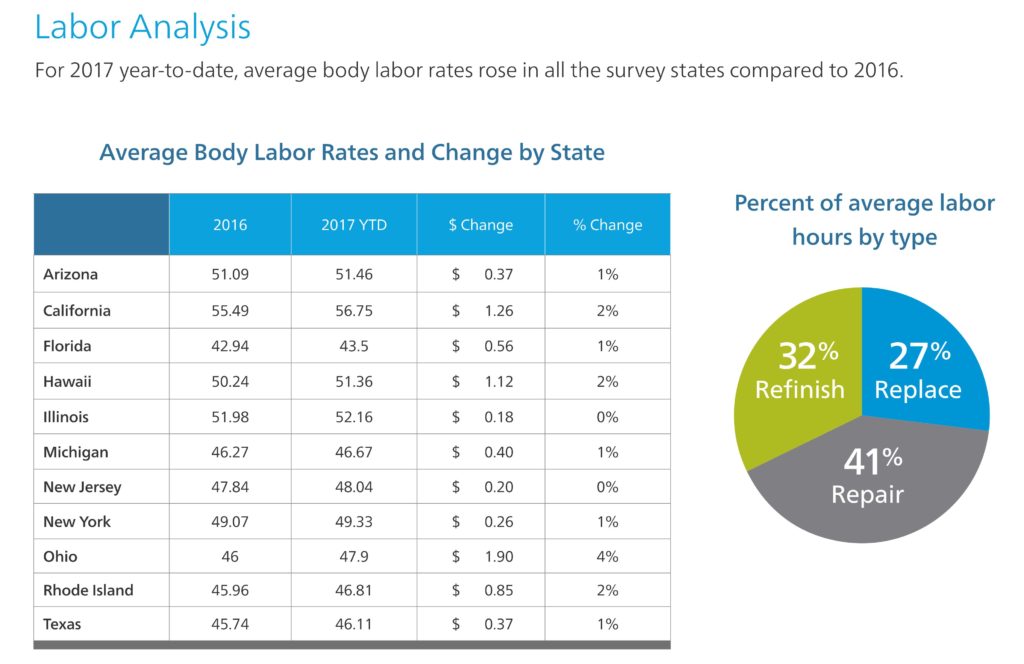 A GEICO van is seen Oct. 16, 2011, at the Houston Air Show at Ellington International Airport. (Lanie/iStock)

Mitchell year-to-date labor rate data through the third quarter of 2017 shows states whose rates are lagging behind inflation. (Provided by Mitchell)