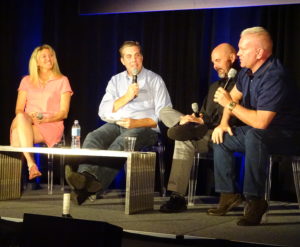 Two notable collision industry-focused attorneys last month urged shops to alert their customers to incorrect repairs demanded by insurance companies, one calling for a “groundswell” of opposition to such compromises.

“I am absolutely on your side,” attorney Todd Tracy of Tracy Law Firm told collision repairers during a SEMA speech Nov. 1, declaring that “it is time for a groundswell” against carriers. He said that for “far too long,” a handful of shops were “raising hell” but not joined by their peers.

When collision repairers fight back, “that’s when this verdict will make a difference,” Tracy said, accusing insurers of seriously injuring or killing thousands of policyholders over decades.

He asked shops to think about insurer bullying leading to a shop putting “your kid’s baseball coach in a time bomb” and encouraged them to never put profit above customer safety.

Tracy encouraged shops to tell a customer that the non-OEM repair would be unsafe and you’re going to fix it using manufacturer procedures. Then sue the carrier for the difference between what they want to pay and what it costs to perform the correct repair, he said.

Once shops start notifying customers of the potential risk to their safety, the vehicle owners will also say, “‘I want this thing done (the) right way'” and refuse to take it to MSOs (an apparent reference to a direct repair program business model requiring concessions to the carrier), according to Tracy.

“When thousands of you start giving them the Heisman” and refusing to be DRP shops, things will change, Tracy also predicted.

Longtime collision repair attorney Erica Eversman during the Nov. 2 SCRS OEM Collision Repair Technology Summit observed that insurers are happy to cut a consumer out of the repair unless they want to bad-mouth a shop.

“You have to do the reverse,” she said: Involve the customer in the repair.

Tell them something like “‘Your insurer wants me to repair your car cheap.'” Not “‘cheaply,'” but “‘cheap,'” she stressed.

“It gets to people’s hearts,” said Eversman, owner of Vehicle Information Services.

When you tell a customer “‘They don’t care if your baby is safe in that car as long as they can shave twenty bucks,’ … “that matters,” Eversman said.

However, at a suggestion from Tracy that focusing on the risk that “‘you will be seriously injured or killed'” rather than the insurer’s profit motive was a better was the better call, Eversman agreed.

“Forget what I said about cheap. Put it in writing and tell them,” she said. The language that someone could be seriously injured or die because of the insurer-demanded repair was “important language,” she said — it’s what the OEMs have to say in their recall notifications.

Tracy pushed for the notification warning the customer rather than relying on a release drafted by “some little s—head lawyer” to dodge liability for a bad repair.

“You may be protected, but could you live with yourself?” he asked.

He also noted during his appearance on the OEM Summit panel that a “good lawyer” could get around it. A customer couldn’t as a matter of law waive their right to sue a shop for “gross negligence” or “willful or wanton misconduct,” he said.

Eversman said she has such a document for her clients, but its purpose is tactical. That release demands the insurer accept liability for the incorrect repairs. “They’re not going to sign it,” she said, and this refusal gives the shop the ammo it needs to do the right repair.

Asked about the idea that a customer has already signed away their right to one aspect of a true OEM-approved repair by consenting to a policy allowing alternative parts to be used, Tracy poked holes in that notion.

It goes back to contract law, he said. How aware is the customer that he or she has given away a right? “Where is it? Is it bold? Is it conspicuous? Did you initial off on it?”

If permission to use non-OEM parts is buried in a footnote, “people aren’t going to put up with that,” Tracy said.

He noted he’s been insured by Chubb for 20 years, but he doesn’t see each new policy — they’re sent to his agent.