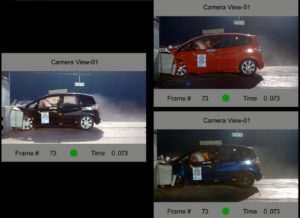 The driver’s side-curtain airbag fires later on a red 2009 Honda Fit with a glued roof and other non-OEM repairs and on a blue  2013 Fit with numerous aftermarket parts than the airbag on an unrepaired, undamaged control black 2010 Fit.

The results appear to be proof of what OEMs and collision repairers have been arguing but insurers refuse to concede and of what Tracy successfully argued in a $31.5 million verdict against John Eagle Collision Center over its repairs to a 2010 Fit: Deviating from OEM collision repair procedures can affect the crashworthiness engineered into a vehicle by that manufacturer.

The footage also supports OEMs’ warnings that aftermarket parts might not perform like new OEM components and collision repairers’ protests that imitation parts aren’t “like kind and quality” — despite insurer claims to the contrary.

It was already obvious when comparing the Insurance Institute for Highway Safety’s test footage to that of the aftermarket-parts Fit that the aftermarket wheel and aftermarket windshield made out far worse than the OEM originals.

But the frame-by-frame look at both test cars up against the control Fit shows dramatic differences in both tests with regards to the airbag timing.

Texas repairer Burl’s Collision took an undamaged 2009 red Fit and attached the roof panel with 3M 8115 panel bonding adhesive — instead of the dozens of welds required by Honda. It also installed an aftermarket windshield and simulated other alleged John Eagle Collision Center repairs which deviated from those approved by the OEM. Karco Engineering crash-tested it Dec. 18.

The black control Fit fires its side-curtain airbag around Frame 63, at around 0.063 seconds. But the glued-roof Fit’s side airbag doesn’t start to appear until about 0.011 seconds later.

The control Fit’s steering wheel airbag starts to blow at about 41 frames (0.041 seconds). The glued-roof airbag doesn’t appear until Frame 45 (0.045 seconds) — by which time the control airbag is already quite visible. Ironically, the glued-roof’s passenger-side dashboard airbag appears to blow a millisecond before the airbag on the control car.

Like the glued-roof Fit, the 2013 blue Fit with aftermarket parts doesn’t manage to blow its side-curtain airbag until about 11 milliseconds after the Frame 63 deployment on the control black 2010 Fit. 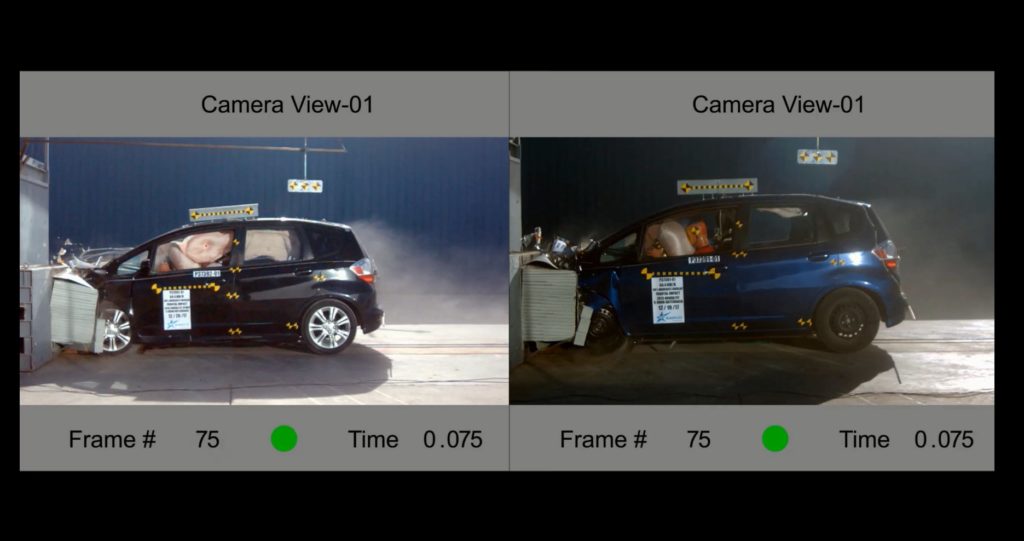 The steering-wheel airbag begins to blow about a frame/millisecond before the OEM edition, but the passenger dash airbag seems almost perfectly in sync.

However, the passenger’s head in the aftermarket-parts Fit seems to be thrown to the left of the headrest more than in the control car, which might be bad from a bodily injury perspective. It appears to do so to a lesser degree in the glued-roof Fit. On the other hand, the driver’s head lolls more to the right in the control Fit compared to the other test cars.

Karco crash-testing footage of three Honda Fits shows obvious variations between the airbag timing on the two experimental cars compared to a control Fit within the same design generation. Seen here are the black 2010 Honda Fit without any damage or repairs; the red 2009 Honda Fit with a glued roof, aftermarket windshield and other repairs similar to a 2010 Fit owned by Tracy Law Firm clients; and the blue 2013 Honda Fit with multiple certified and uncertified aftermarket parts. Each is undergoing a 40 mph moderate-overlap crash test like the IIHS’. (Screenshot from Karco video provided by Tracy Law Firm)

A 2013 blue Honda Fit with aftermarket parts, right, doesn’t manage to blow its side-curtain airbag until about 11 milliseconds after the deployment on the control black 2010 Fit. (Screenshot from Karco video provided by Tracy Law Firm)