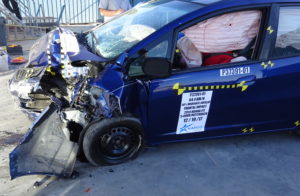 Photographs and data from the two experimental Fits and the control vehicle also indicate that the aftermarket and glued-roof Honda Fits sustained greater frame damage and diminished seat belt performance during the 40 mph moderate-overlap crash tests, according to Tracy.

“The tests scientifically prove that a non OEM approved repair and the use of aftermarket parts affect restraint system performance, airbag performance, injury production, occupant kinematics, transfer and distribution of energy,” the Law Firm wrote in an email last week.

Tracy was expected to present his findings to collision trade groups Monday and today.

Tracy has said that the blue 2013 Fit with aftermarket parts performed the worst during the replica of the Insurance Institute for Highway Safety test conducted last month by Karco Engineering.

That Fit was repaired following OEM procedures but with aftermarket parts instead of the OEM ones recommended by Honda.

These imitation components included Certified Automotive Parts Association-certified fenders and a CAPA-certified hood; a NSF-certified bumper reinforcement beam; an uncertified aftermarket radiator support, windshield and drivers-side front wheel; and two uncertified aftermarket hood hinges, according to experiment contributor Burl’s Collision. Notably, some of the parts allegedly didn’t fit correctly; shop owner Burl Richards said he in discussion with Tracy made the decision not to try and force them to do so while preparing the cars.

Requests Monday to CAPA, the Automotive Body Parts Association, NSF and LKQ seeking comment had not yet been returned.

The experimental red 2009 Fit, which had been repaired to match the work done on a 2010 Fit owned by Tracy clients Matthew and Marcia Seebachan, also demonstrated why shops could be placing customers and their business at risk should they deviate from OEM guidelines.

That vehicle received the repairs allegedly done by John Eagle Collision Center in 2012 for the prior owner of the Seebachans’ Fit. Variables introduced included Burl’s Collision bonding the experimental car’s roof with 8115 adhesive instead of welding it as Honda demands, and installing an aftermarket windshield, just as an imitation had allegedly been used for the prior owner of the Seebachan Fit.

The two experimental Fits and the black control 2010 Fit were part of the same 2009-13 structural design generation and are identical for the purpose of the test, according to the IIHS.

Tracy’s new results indicate that another restraint system was compromised on top of what appears to be a side airbag timing delay visible in crash videos. Images show the aftermarket-parts and glued-roof Fits with a seat belt which was pulled 13 inches and 12 inches, respectively — compared to just 8 inches on the control Fit. The attorney attributed the extra distance — which means the passenger traveled farther forward during the collision — to “frame crush.” Graphs of data from a bottom frame rail sensor show that “Weaker aftermarket parts fail at lower forces” and the car suffered higher forces and structural failures not experienced in the other two vehicles, according to Tracy. “This shows why the feet and legs were crushed in the aftermarket and the glued on roof,” Tracy wrote in an email about those two charts. “The frame is destroyed.”

We’d written earlier about the higher Head Injury Criterion scores experienced by the driver dummy in the adhesive-bonded Fit, which Tracy’s presentation attributes to a failure to properly distribute energy. But data from his presentation also suggests the upper necks of the glued-roof and aftermarket-parts Fit drivers received about 500 Newtons of force — double that on the control Fit, according to Tracy.

The driver dummy’s left femur experienced a peak of about 1,685 N, compared to 709 N on the glued-roof Fit and just 180 N on the control Fit, which Tracy’s presentation suggests carries a greater risk of breaking the bone.

Finally, the dummy’s right toe on the control Fit was subjected to less force than the 149 G recorded on one measurement on the glued-roof version and 174 G on the car with aftermarket parts, according to Tracy.

“When you mess around with the tuning harmony of a vehicle’s safety systems with improper repairs and inadequate material, devastating consequences follow,” Tracy wrote in an email.

Correction: An earlier version of this article incorrectly characterized neck, toe and femur forces experienced by the “driver” in these Honda Fits. The article has since been corrected to reflect the accurate statistics.

Correction: An earlier version of this article incorrectly described measurements related to the passenger’s-side seatbelts on the three Honda Fits. The data measured the length of seatbelt which traveled through the D-ring during the collision, which indicates how far forward the dummy was flung from the impact. The article has since been corrected to reflect this and to provide the correct measurement for the control Fit: 8 inches.

Graphs of data from a bottom frame rail sensor on a blue Honda Fit carrying aftermarket parts show that “Weaker aftermarket parts fail at lower forces” and the car suffered higher forces and structural failures not experienced in a red Honda Fit with repairs not approved by the OEM and a control black Fit, according to attorney Todd Tracy. (Provided by Tracy Law Firm)