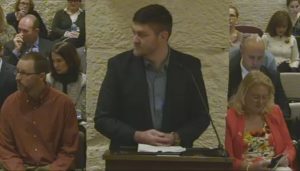 Indiana collision repairers turned out Thursday in support of a bill which would bar insurer deviations from estimating systems, though the head of the IABA noted he would like to see more stress on manufacturer instructions as well.

Messmer said he “in haste” used as a template language from Minnesota law — the “most aggressive in the country” — for Senate Bill 164. He plans to revise the bill’s text, and no vote was taken at the Senate Insurance and Financial Institutions hearing Thursday on the measure.

Some of the language deals with customer shop choice rights amid an industry split between direct repair program and unaffiliated shops, a topic that drew a great deal of attention at the Thursday hearing. But Indiana Autobody Association First Vice President Todd Bonecutter (Glenbrook Collision Center) and other repairers stressed the issue of insurers refusing to reimburse necessary procedures.

“Our goal is for the consumer,” Bonecutter said. “… They deserve their car fixed the right way.”

Right now, some insurers are “great to work with,” but others “make it difficult for us to do a proper repair, unless we do it ourself and write if off,” he said.

Auto body shops had to follow OEM recommendations — it’s like a doctor recommending a course of treatment to a patient, Bonecutter said. Shops wanted a bill that allowed them to “get paid for what we’re doing” and in turn restore the car the way the manufacturer said it should be, he said. “The cost isn’t up to the shop at this point in time,” IABA President Doug Martin (Martin’s Body Shop) told the committee, describing the complexity of modern repairs. A collision repairer’s role was to produce a vehicle “safe to drive again.”

“We have to do it correctly and properly,” he said.

Much of the cost stemmed from the shop following manufacturer repair procedures, according to Martin. Insurers needed to address that cost with customers, he said.

Even in a direct repair program, issues can arise, according to Martin, who offered the assessment: “If they wanted to deny the payment, we would just be out,” he said.

SB 164 as written today would make it so an insurer couldn’t:

(3) Engage in a boycott, intimidation, or coercive acts in connection with negotiations concerning repairs to a damaged motor vehicle for which the insurer is liable under an insurance policy

(7) Unilaterally and arbitrarily disregard a repair operation or cost identified by an estimating system the use of which has been agreed to by the insurer and the repair shop for determining the cost of the repair.

Martin said the IABA would like to see stronger language clarifying that OEM repair procedures must be taken into account and followed.

Insurance Institute of Indiana and State Farm lobbyist Jon Zarich, who spoke before the collision repairers but after Messmer, didn’t really address the concern of insurer resistance to OEM repair procedures.

However, he did note that “we’re not in that business (collision repair),” which would seem to be a point in favor of the Indiana shops’ argument. If, as attorney Todd Tracy demonstrated in the John Eagle case, an actual collision repairer isn’t even qualified to unilaterally disregard OEM repair procedures, an insurer has even less standing to do so (in the form of withholding payment).

Zarich did note that “our insured already has a venue” to complain about improper insurer behavior through the Unfair Claims Settlement Practices Act.

“The Department of Insurance has a lot of authority over us,” he said.

Of course, that creates an extra hurdle for the customer, who must wait, potentially carless or with an increasing rental bill, for the DOI to investigate the claim and hopefully force the insurer to do something that should have been a no-brainer in the first place: pay for the procedures clearly specified by the vehicle or paint manufacturer as necessary to restore a vehicle to pre-loss condition.

“We’re partners in this together,” Zarich said of the shop-insurer relationship, which based on the shops’ complaints isn’t always the case in Indiana.