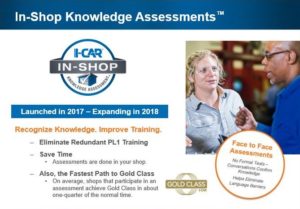 I-CAR announced Thursday that it would allow shop personnel to earn course credit by demonstrating subject matter expertise in conversations with assessors — a move which could get a tech to Platinum and a shop to Gold Class sooner.

“This is a major innovation for I-CAR,” CEO John Van Alstyne said.

I-CARP piloted the program in 2017 but will expand it nationally this year, Van Alstyne said. The initiative addressed a technician’s criticism that I-CAR training was redundant because “‘I already know this stuff,'” he said.

Full-time I-CAR knowledge assessors will visit applicants’ shops and conduct face-to-face interviews about ProLevel 1 subjects, according to Van Alstyne. Do well, and I-CAR will consider the interviewee to have passed the corresponding course, he said. (See which courses are ProLevel 1 for each shop role here.)

“They’re going to get to Gold Class faster,” Van Alstyne said, describing the system as of high value to the industry.

“On average, shops that participate in an assessment achieve Gold Class in about one-quarter of the normal time,” an I-CAR slide stated Wednesday. I-CAR sales and marketing Senior Vice President Nick Notte said an assessor could cover a knowledge area in about 18-20 minutes and are available to quiz the entire shop staff, including estimators, painters and body technicians.

Notte said some technicians might start out “very nervous” but “tend to know everything.”

However, he said he’s never had a technician leave without having learned something new.

I-CAR also bills the assessments as a way of overcoming language barriers (though it will ultimately translate all of its classes into Spanish by 2019). Some staffers for whom English is a second language might never have had formal training and can be afraid of it, according to Notte. But after an assessment, “they’re excited about confirming what they know,” he said.

The assessors interviewing multiple staffers withing a shop reveals gaps in the repair facility’s collective knowledge, which “the shops also find quite telling,” Van Alstyne said. I-CAR will offer a prescription of courses to take so the facility can correct those deficiencies and get up to speed, Van Alstyne said. I-CAR Professional Development Program roles (See what ProLevel 1 topics can be covered in an assessment for each profession.)

I-CAR announced Thursday that it would allow shop personnel to earn course credit by demonstrating subject matter expertise in conversations with assessors — a move which could get a tech to Platinum and a shop to Gold Class sooner. This slide highlights the program. (Provided by I-CAR)