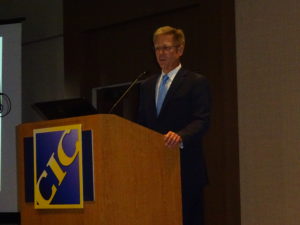 “I think the industry is stepping up,” I-CAR CEO John Van Alstyne said Thursday as I-CAR announced large increases in the percentage of shops training and holding continuing education requirements.

I-CAR in late 2016 reported 9,325 shops out of roughly 33,500 in the industry were training with I-CAR, about 28 percent. Van Alstyne on Thursday said 10,909 collision repair facilities — a third of the industry — trained with I-CAR last year.

But that still 58 percent of the industry who to I-CAR’s knowledge lacks continuing education requirements 40 years after I-CAR’s launch, Van Alstyne pointed out.

“What’s it going to take?” he asked, noting that I-CAR’s vision demands that “every” person in the industry to have the knowledge and equipment to deliver a proper repair. 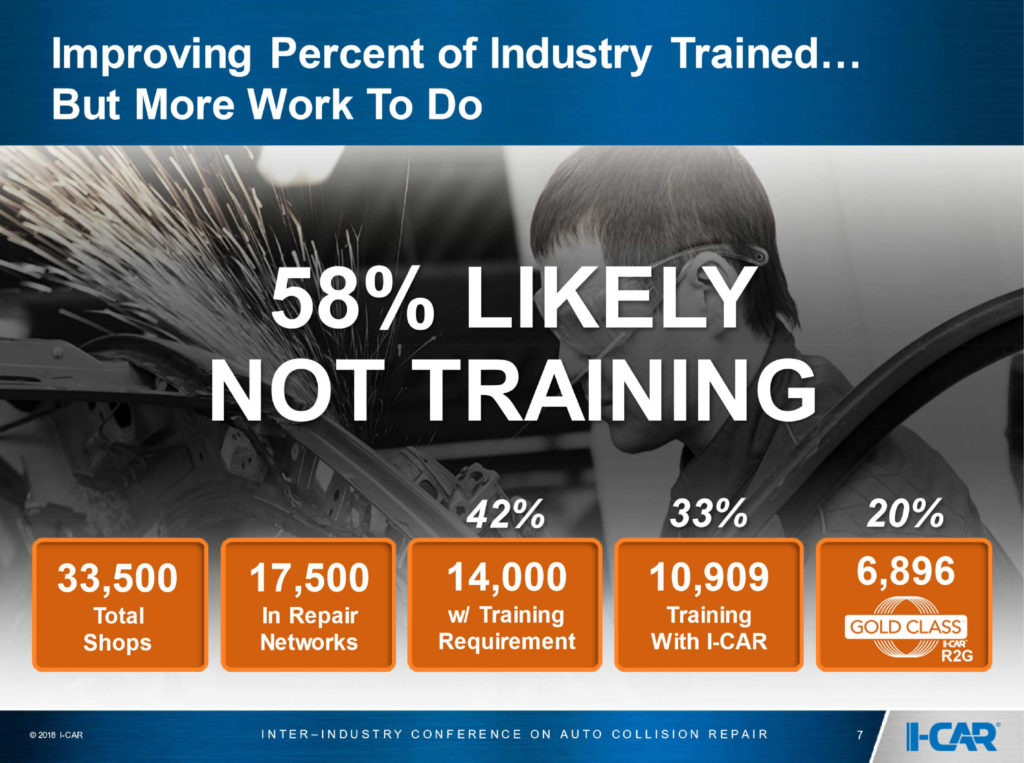 The number of Road to Gold shops fell from a projected 3,015 in 2016 to 1,326 in 2017, which Van Alstyne credited to the facilities graduating to Gold Class status.

“That’s fantastic. We have been pounding the drum on welding for years,” Van Alstyne said. 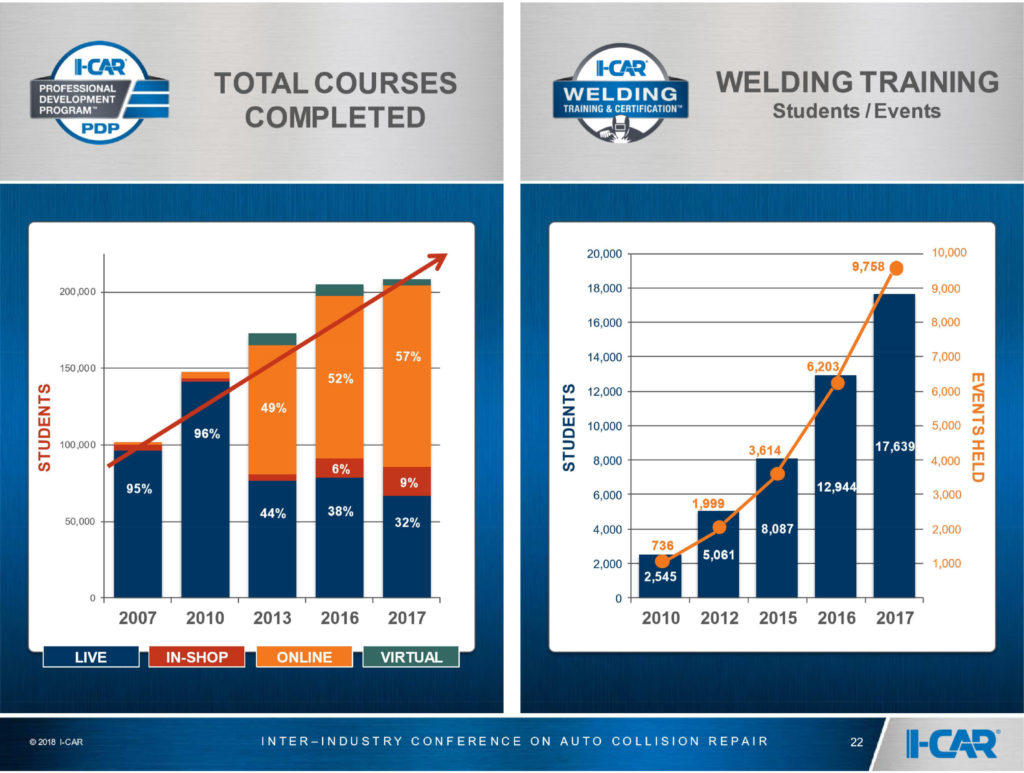 I-CAR itself held 9,765 welding events, up more than 57 percent from the prior year.

Van Alstyne attributed the bump in I-CAR training stats in part to State Farm’s requirement that all Select Service facilities pass all three I-CAR welding certifications, according to Van Alstyne.

But I-CAR executives also indicated Wednesday that shops outside of the No. 1 auto insurer’s direct repair program sought the credential as well in response to the carrier’s move.

Asked if I-CAR had seen interest from other carriers in welding certifications in light of State Farm’s announcements, Van Alstyne said, “We have a pipeline.” He couldn’t share more details.

While State Farm was still the only insurer to require all three welding certifications (for which we’d say it deserves a great deal of credit), “that’ll change,” Van Alstyne predicted. 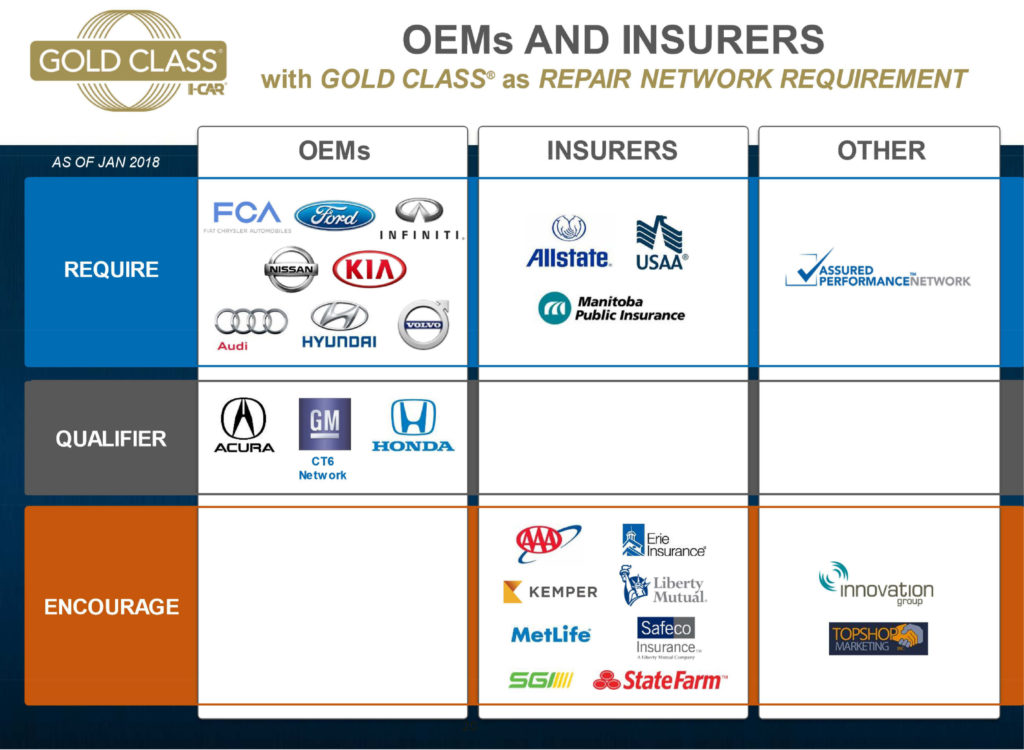 Van Alstyne showed data indicating how the insurance industry and OEMs have grown to require more I-CAR training since he started there in 2010.

In 2010, it was just “Allstate, all alone there,” requiring Gold Class to be part of a direct repair program or OEM certification network, Van Alstyne said.

Today, many insurers and OEMs either outright require that status, treat it as a qualifier for their program, or at least “encourage” it, according to an I-CAR slide. Many OEMs and insurers also demand at least one welding certification from their networks, with Audi, Hyundai and Volvo joining those ranks in 2018, according to I-CAR. 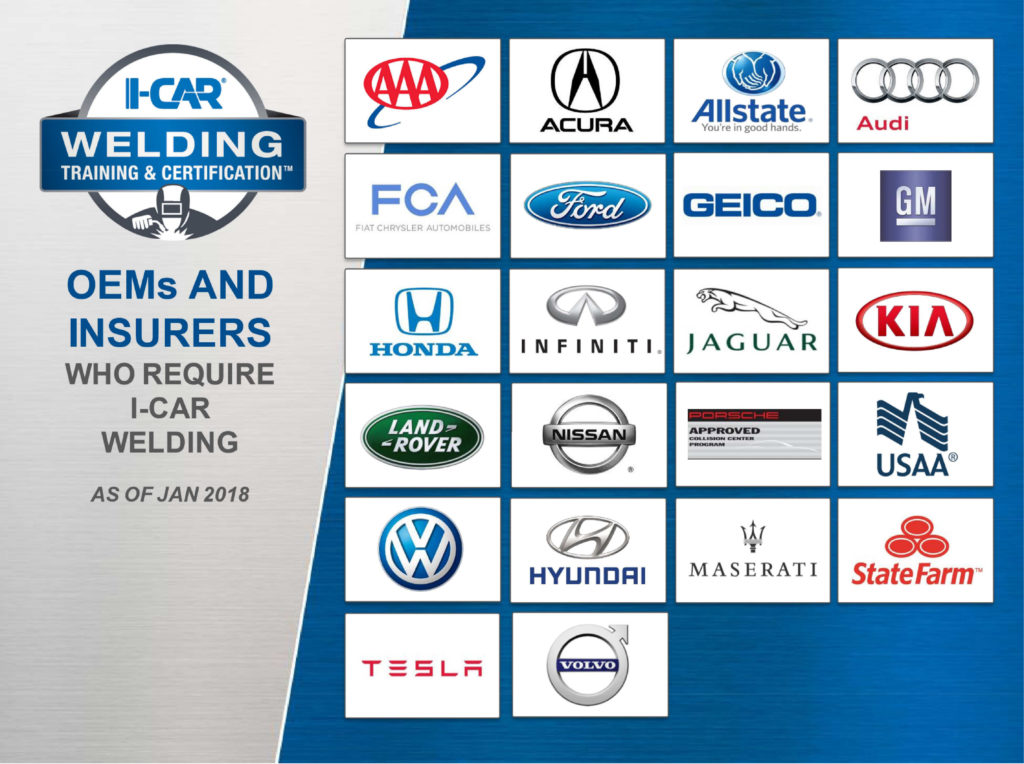 “2017 showed considerable increases in the collision repair industry’s commitment to training,” Van Alstyne said in a statement. “From OEMs and Insurers acknowledging I-CAR programs, to technical schools and suppliers working in concert to help secure sites for better learning environments, to more and more shops now understanding the critical need to train and the value it creates for them, I commend the progress our industry is making towards performing complete, safe and quality repairs.”

I-CAR also noted that a larger percentage of technicians who weld had been trained by its staff, which it called “a reasonable statistic, as I-CAR is the principal industry provider of welding training and certification.”

About 69 percent of techs welding on steel lacked I-CAR certification in 2013, and 98 percent of the workforce hadn’t received I-CAR steel sectioning credentials. About 94 percent of aluminum welders weren’t certified by I-CAR that year. 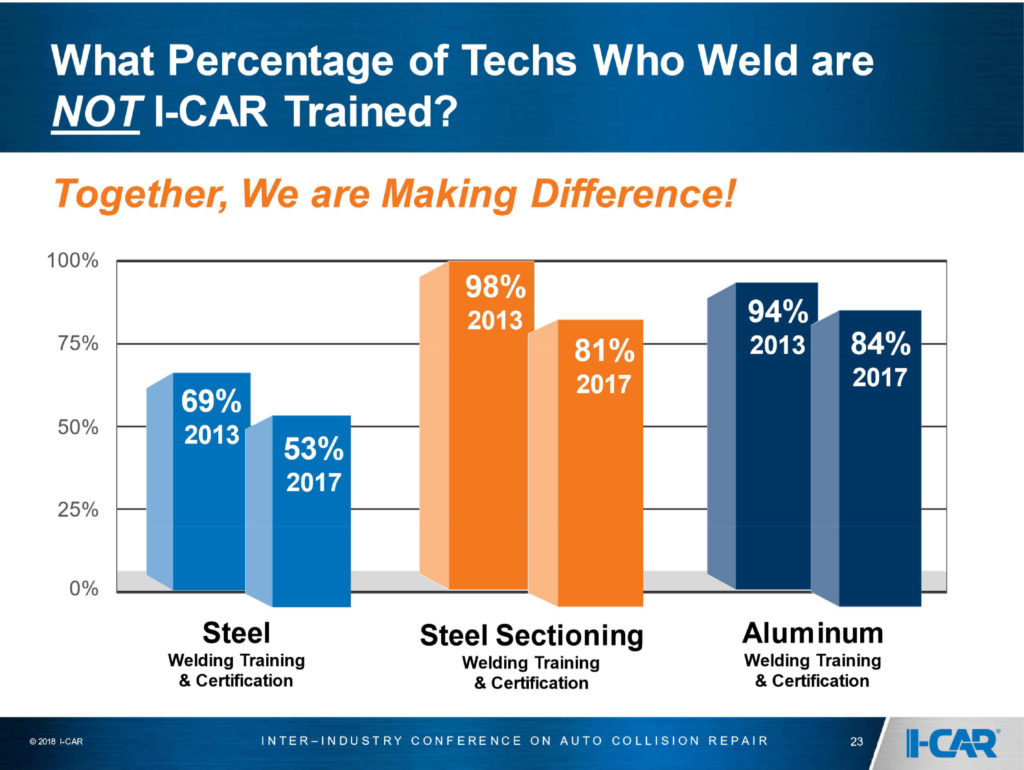 By 2017, only 53 percent of steel welders, 81 percent of techs sectioning steel and 84 percent of aluminum welders weren’t credentialed. That’s still pretty frightening from a consumer perspective, unless a large chunk of the industry is proving themselves through some other means, such as American Welding Society testing or an OEM’s vetting. As I-CAR implies, that’s probably not the case.

“So we are far from done,” Van Alstyne said in a statement. “It is our obligation as a neutral, not-for-profit organization to ensure every technician is provided with the knowledge and skills required to perform proper repairs. While we have accomplished a lot as an industry, especially in 2017, we still estimate that 58 percent of technicians are likely not training, and not to the level required. We need to do better, and we will do better.”

“I think the industry is stepping up,” I-CAR CEO John Van Alstyne said Thursday as I-CAR announced large increases in the percentage of shops training and holding continuing education requirements. (Provided by I-CAR)

Today, many insurers and OEMs either outright require Gold Class status, treat it as a qualifier for their program, or at least “encourage” it, according to an I-CAR slide. (Provided by I-CAR)

Many OEMs and insurers also demand at least one welding certification from their networks, with Audi, Hyundai and Volvo joining those ranks in 2018, according to I-CAR. (Provided by I-CAR)