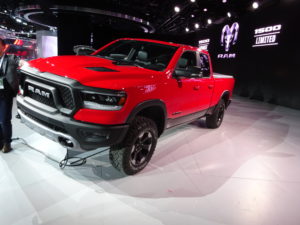 FCA announced Jan. 15 that the next-generation 2019 Ram 1500 cut nearly 225 pounds out of the vehicle through lightweighting, including building the frame out of 98 percent higher-strength steels.

The OEM also increased its aluminum usage by building the tailgate out of the metal. The 1500 had already pioneered aluminum hoods among trucks, according to FCA, and that closure remains aluminum on the next-generation model.

That’s the extent of the aluminum on the exterior of the vehicle — in contrast to its rival next-generation 2019 Chevrolet Silverado (which adds aluminum doors in addition to the other closures) and the next-generation 2015-present Ford F-150 (which is completely aluminum until you reach the frame). FCA said it used aluminum “for selective components, not just where possible but where practical.”

However, collision repairers might still encounter more of the metal on the truck, including aluminum lower control arms (a metal choice carried over from the 2018 Ram 1500), the engine mounts, transmission and front suspension crossmembers, the center part of the front axle and the steering gear. FCA also switched the exhaust hanger brackets to aluminum as part of its efforts to cut 9 pounds out of the 2019 Ram 1500’s exhaust system. 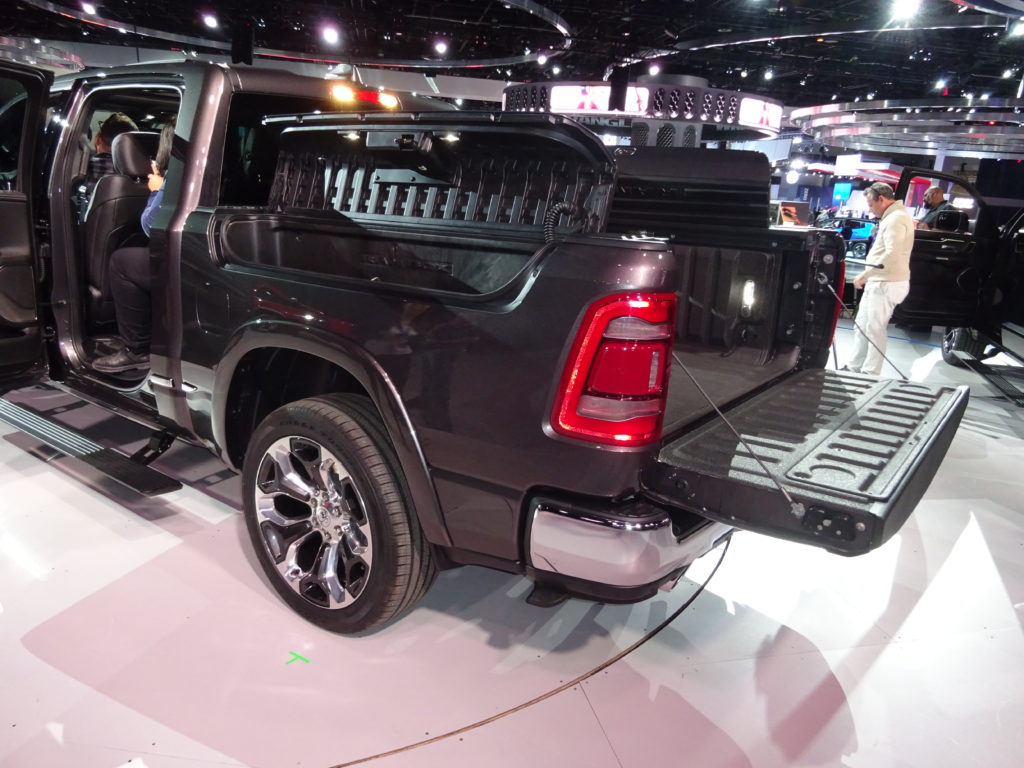 Based on Chevrolet and Ram’s lightweighting decisions and the infamous F-150, it seems as though repairers wishing to continue working on the three most popular vehicles in America must invest in aluminum training and a dedicated set of tools and aluminum workspace, so as to avoid galvanic corrosion.

While the body repair manual for the 2019 Ram 1500 obviously doesn’t exist yet, FCA’s instructions for the 2018 Chrysler Pacifica warn, “When working with aluminum use dedicated tools, grinding discs and sandpaper to prevent steel cross contamination with the aluminum. Cross contamination of these two materials will cause galvanic corrosion.”

A repairer working on a Ram 1500 will also encounter composite materials, which suspend particles or fibers within a polymer resin for a light but tough material.

“The upper front suspension control arms (integrated with a steel structure), and the air dam structure are made from, or combined with, composite materials,” FCA wrote Monday.

In a video released Monday, Larry Sak, head of materials, fasteners and engineering standards, described the control arm as stamped steel “overmolded” with structural plastic and “unique from anything we’ve done before.”

“It’s a weight save over the traditional control arm,” Sak said. 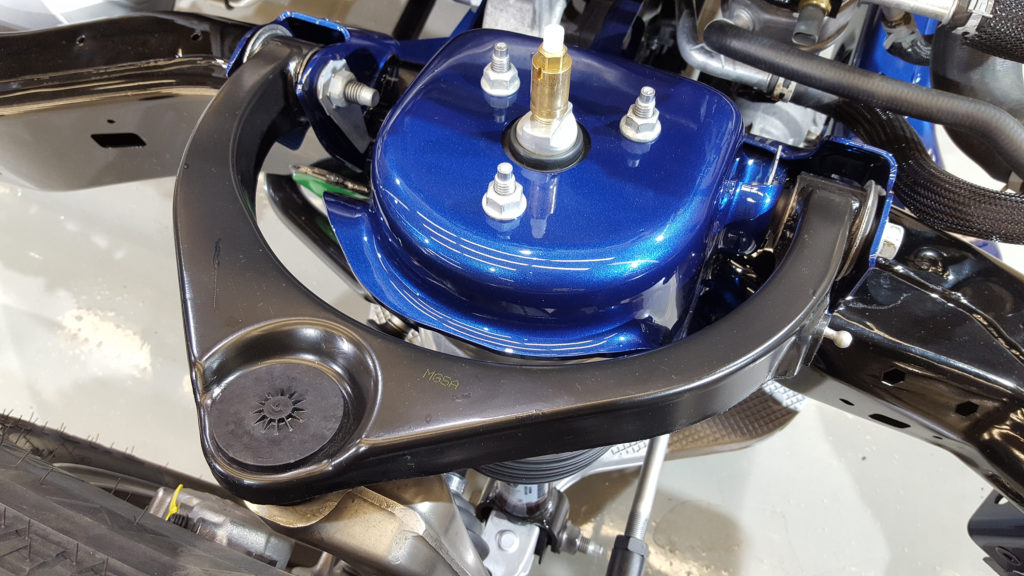 Higher-strength steel is clearly the star of the lightweighting show on the Ram 1500, with 98 percent of the frame and 54 percent of the body made out of those lighter and stronger grades.

The OEM showed off both the frame and its steels at the North American International Auto Show on Monday and in the video. Sak called it “without a doubt, the best frame in the pickup truck market.” 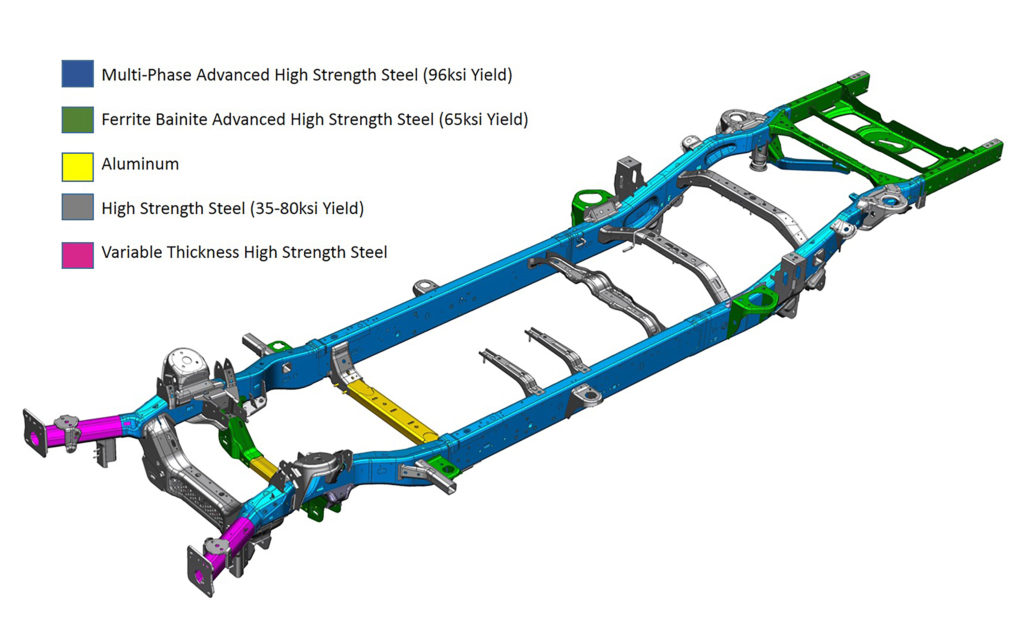 FCA also indicated that it designed the high-strength-steel-intensive frame for safety as well as mass savings  — meaning that repairers might have to take even more care when working on it than they did with the 2018 1500 frame. 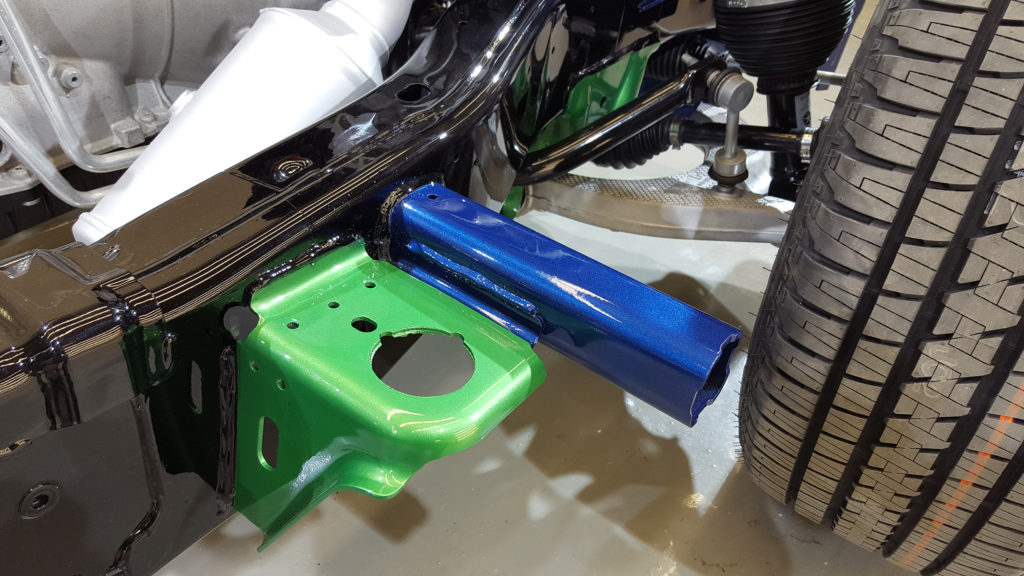 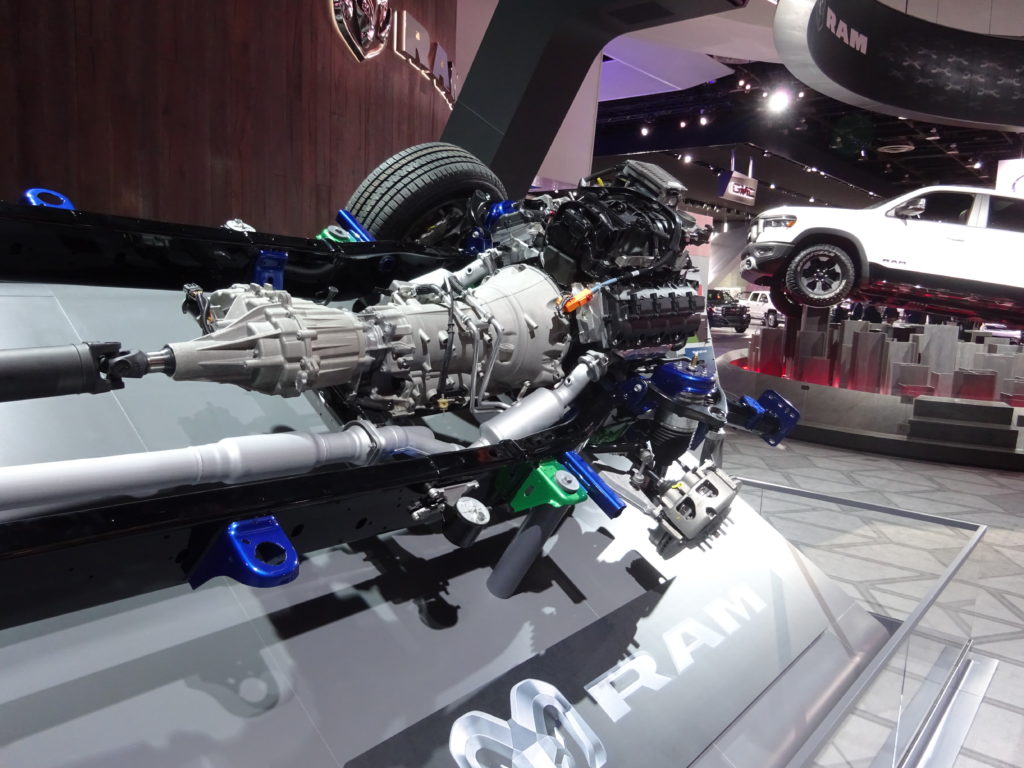 Sak said the splayed rails were advanced high-strength steel formed over a mandril with variations in gauge thickness and produced “tailored performance and repeatable performance” when it came to impact and durability. 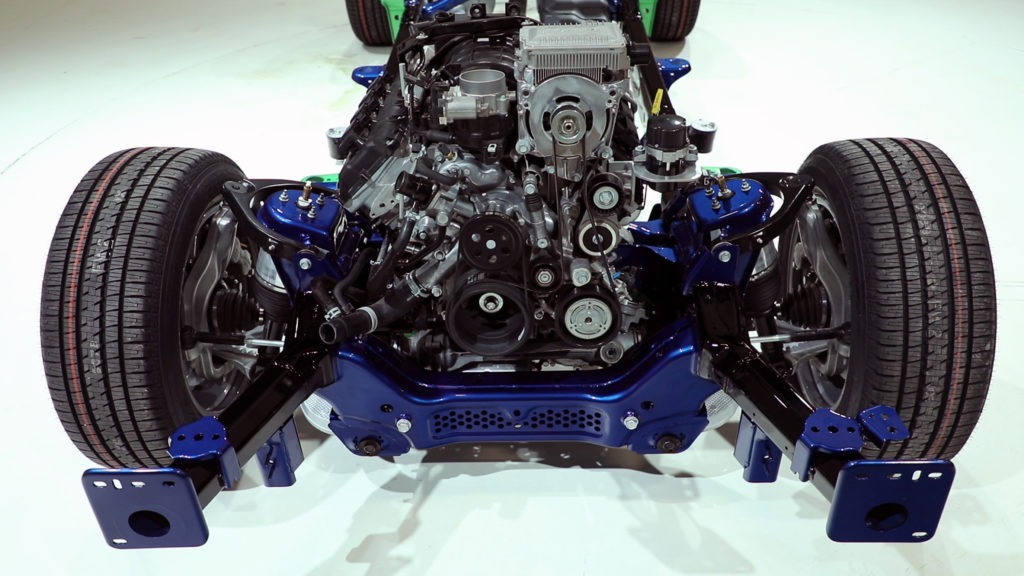 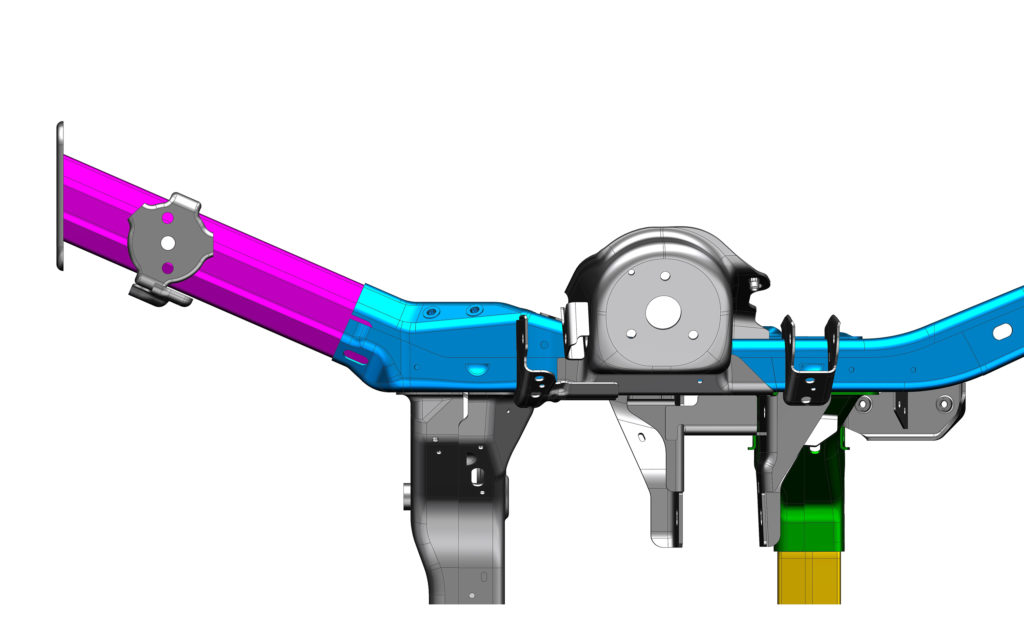 It’ll be interesting to see if this crash energy-directing design create some new restrictions on how the frame can be fixed.

The use of extensive high-strength steel in the frame would also seem to make it likely that FCA would preserve its current ban on heat straightening. 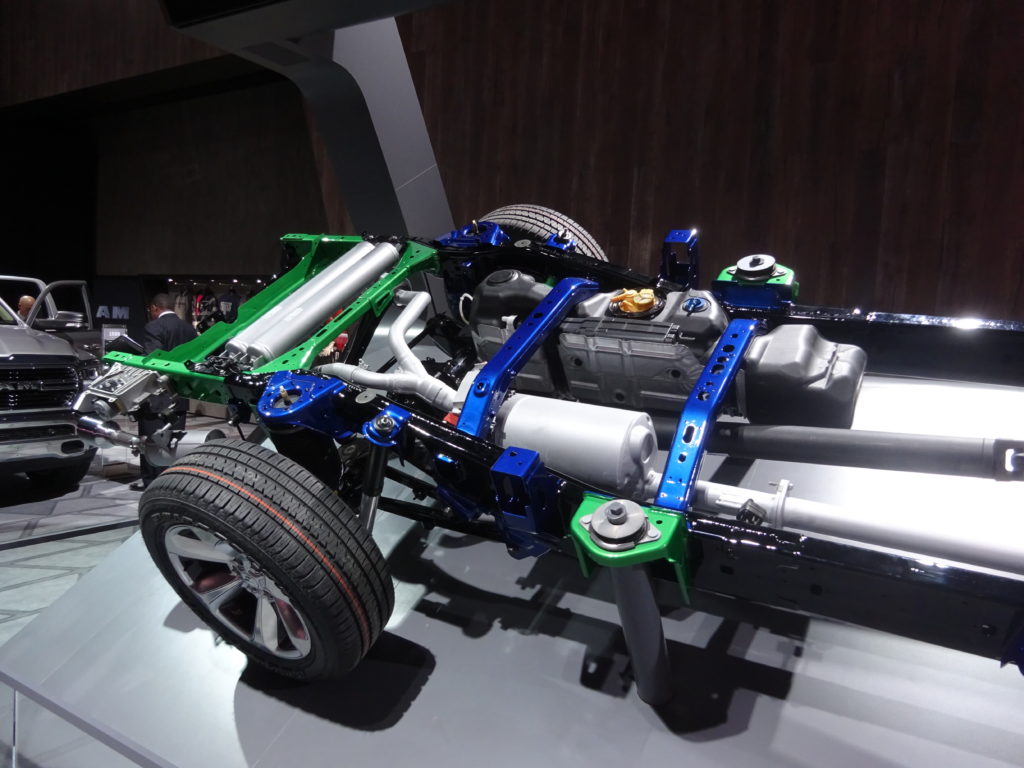 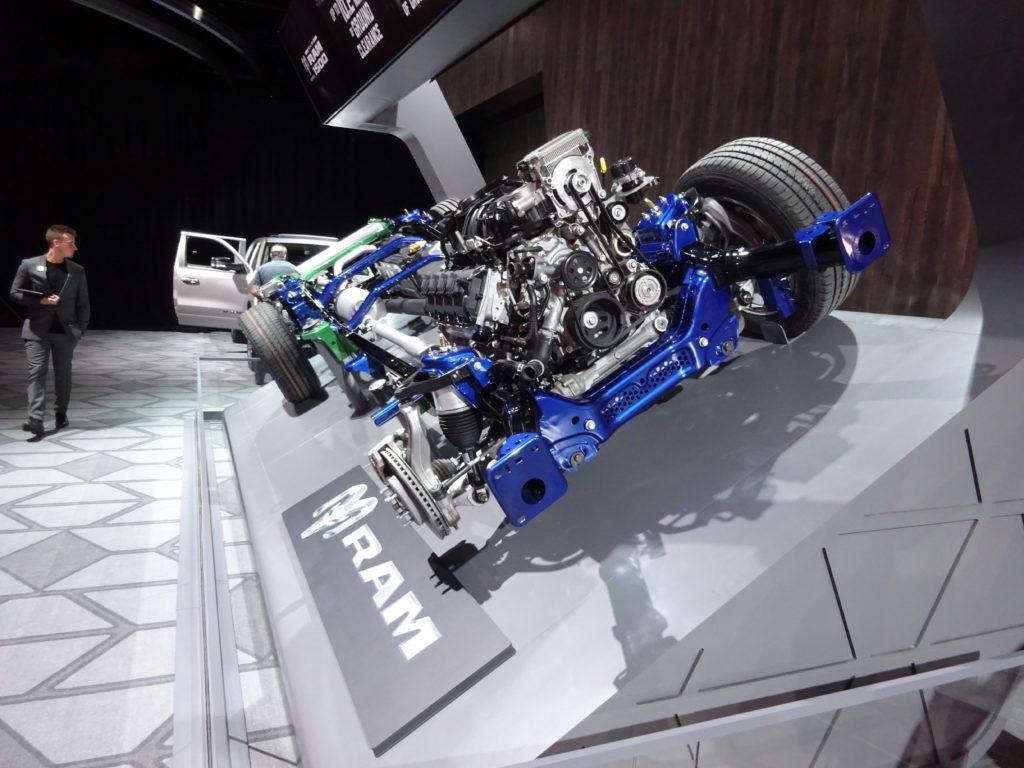 “Any body panel or frame component damaged which is to be repaired and reused, must be repaired using the ‘cold straightening’ method. No heat may be used during the straightening process,” FCA wrote in the current-generation Ram 1500’s body repair manual.

Anything heated needs to be discarded and the heat-effect zone minimized, the OEM also wrote.

“During rough straightening prior to panel replacement, damaged panels or frame components may be heated to assist in body/frame realignment,” the manual states. ” The application of heat must be constrained to the parts which will be replaced and not allowed to affect any other components.” 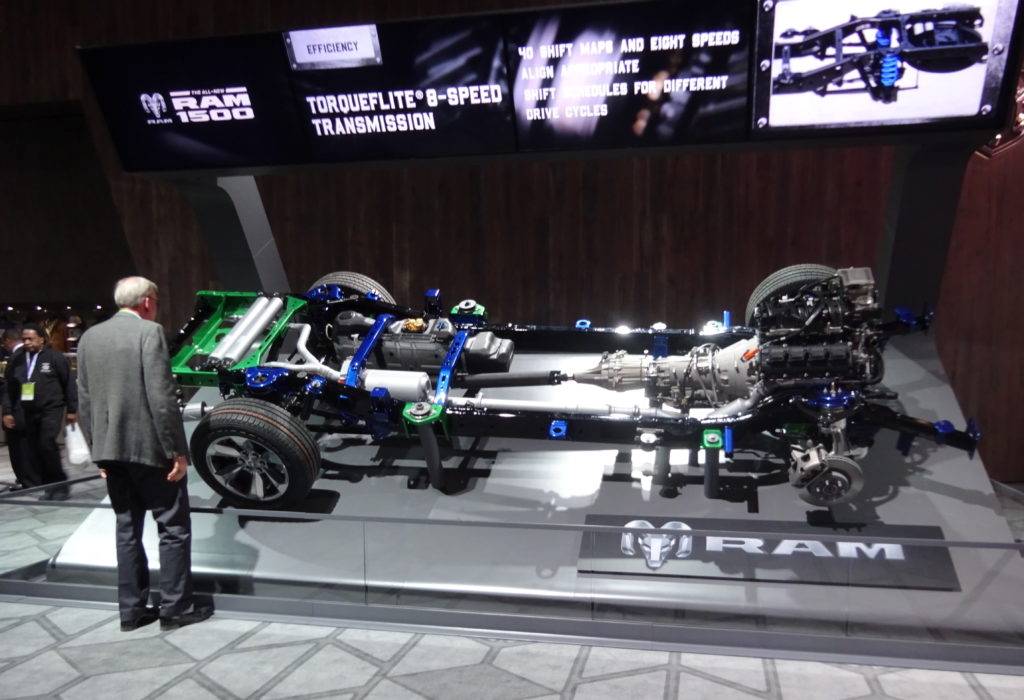 Ram vehicle line executive Rob Wichman said the cab of the Ram 1500 included hot-stamped steel in the door rings and headers, and Sak described its panels as bake-hardened steel.

Shops should also watch for a change on what FCA calls the truck’s “D-pillar” — the U-shaped structure at the rear of the box, just behind the tailgate. The 2019’s D-pillar is a single, continuous hydroformed piece of advanced-high-strength steel which saves 9 pounds compared to the 2018 structure made out of multiple components welded together,  according to Ram 1500 chief engineer Mike Raymond. 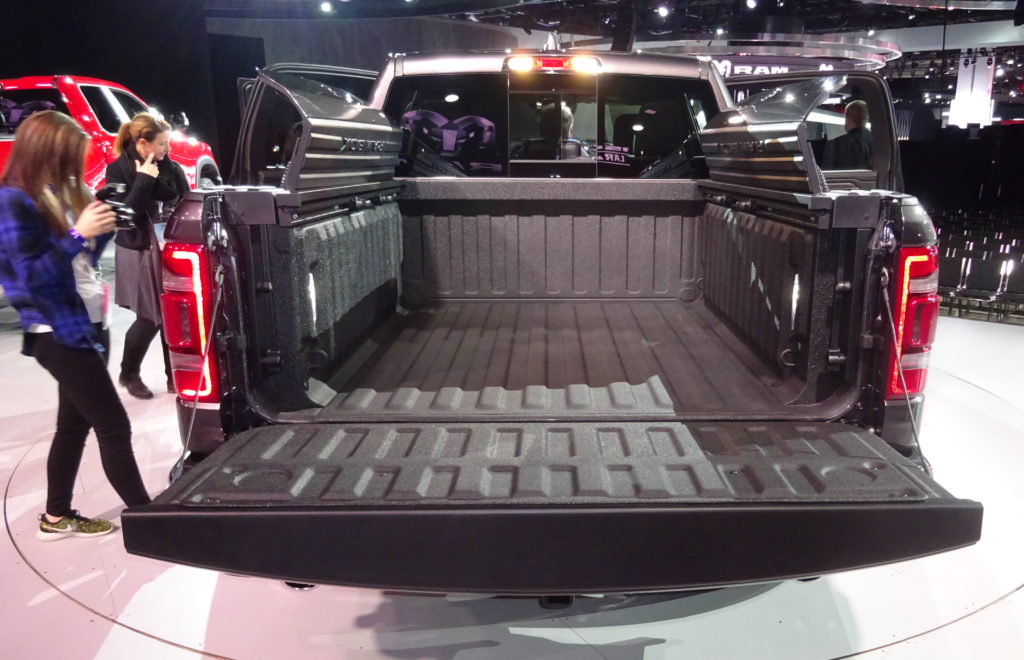 The 2019 Ram 1500 has an aluminum tailgate. (John Huetter/Repairer Driven News)

The 2019 Ram 1500 has an upper control arm made out of stamped steel overmolded with a structural plastic. The lower control arms are aluminum. (Provided by FCA)

Collision repairers should watch for what FCA called “high-strength steel tire blockers” on the frame of the 2019 Ram 1500. The OEM said they’re “placed at front cab location to redirect the tire outbound in a front-offset impact.” (Provided by FCA)

The 2019 Ram 1500 has what FCA called “splayed and tapered frame rail technology” which “creates a highly efficient energy absorbing front frame rail structure for all impact modes.” (Provided by FCA)

The 2019 Ram 1500’s “D-pillar” — the U-shaped area of the box behind the tailgate — is a single, continuous hydroformed piece of advanced-high-strength steel which saves 9 pounds compared to the 2018 structure made out of multiple components welded together,  according to Ram 1500 chief engineer Mike Raymond. (John Huetter/Repairer Driven News)