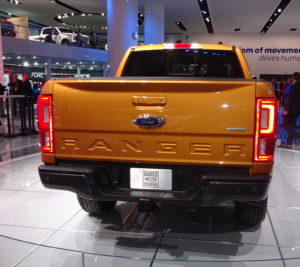 Though the 2018 Ford Expedition and 2018 Lincoln Navigator followed the F-150’s aluminum lead, the 2019 Ford Ranger seems to be predominantly steel.

Ranger program manager Jeff Seaman said Jan. 15 at the North American International Auto Show that only the tailgate, hood and fenders on the Ranger are aluminum. Asked if the tailgate inner and outer were both aluminum, Seaman said, “I wouldn’t get into the breakdown of the actual parts.”

The roof, doors, bedsides, and bed are steel, according to Seaman.

Chevrolet in 2016 criticized the impact resistance of the F-150’s aluminum bed and did so again at the auto show while also showing off the higher-strength steel it used on the 2019 Silverado bed. Asked if the Ranger bed was higher-strength steel instead of mild steel, Seaman said he wouldn’t discuss “the grades on the steel in there, but it’s a steel bed.”

Ford also used an aluminum body-in-white for the cab of the F-150, but Seaman described the Ranger’s pillars as steel.

The deviation from the aluminum design of the Ranger’s big brother F-150 might stem from a desire to keep the new truck’s price low and less of a need for aluminum weight savings. The Ranger is a midsize truck, while the F-150 is a full-size pickup.

“We assess the materials on a commodity-by-commodity basis,” Seaman said. For example, he said the front knuckles were aluminum and the lower control arms were a high-strength steel, he said.

“Each commodity’s a little bit different,” Seaman said, describing putting the “right amount of steel” in the appropriate locations.

From a repairer perspective, the mostly steel exterior might make repairs easier. However, a shop will still probably need to be equipped like an F-150 shop to properly manage dust and galvanic corrosion related to the aluminum hood, fenders and tailgate. Ford did use a higher-strength steel frame in the F-150, and Seaman said one existed as well in the Ranger.

“This is a high-strength steel frame,” he said.

“Built Ford Tough is engineered in Ranger’s DNA – from its high-strength steel frame backbone to its frame-mounted steel front and rear bumpers,” Ford wrote in a news release Jan. 14. “Ford engineers put Ranger through the same torture testing as the legendary F-150 goes through.”

Expected Ranger production volume was not disclosed, but shops might see a lot of them based on what Ford said was heavy market demand.

Other elements of interest to collision repairers: Featured images: Though the 2018 Ford Expedition and 2018 Lincoln Navigator followed the F-150’s aluminum lead, the 2019 Ford Ranger is predominantly steel. Ranger program manager Jeff Seaman said Jan. 15, 2018, at the North American International Auto Show that only the tailgate, hood and fenders on the Ranger are aluminum. (John Huetter/Repairer Driven News)