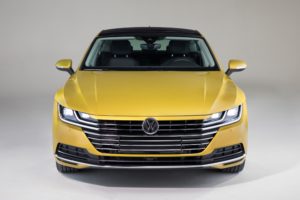 An international pedestrian-protection technology will begin to appear in more collision repairers’ shops with the 2019 Volkswagen Arteon and 2018 Buick Regals.

The models carry standard what Buick calls an “active hood” and VW calls a “reactive hood.” Both operate on the same principle: When the car senses it’s about to hit a somebody, charges blow, lifting the back of the hood up and lessening the impact for the unfortunate pedestrian.

They’re a means of passing the pedestrian crash tests assessed abroad by entities like the European New Car Assessment Program but not required in the U.S.

The 2018 Buick Sportback, GS and TourX’s hoods elevate about 4 inches during deployment, according to Buick.

“Along with the Regal Sportback, it is the first Buick to offer a standard active hood pedestrian safety system that senses the imminent impact of a pedestrian between 16-30 mph and uses a pyrotechnic actuator to lift the back of the hood up about 4 inches to lessen the impact and potentially reduce injury,” Buick wrote of the 2018 TourX in April 2017.

Asked if General Motors would spread the technology to other Buick, Cadillac, GMC and Chevrolet models, Buick LaCrosse, Cascada and Regal spokesman Mike Ofiara wrote Friday: “At this time it is exclusively for the Regals (Sportback, TourX, and GS).”

“Sensors in the front of the car can detect if there is an impact with another vehicle or a pedestrian,” Anderson wrote. “If the sensors detect a pedestrian collision, two small pyrotechnic charges connected to hinges at the rear of the hood fire. This raises the rear of the hood by about 2 inches, helping to mitigate pedestrian injuries by preventing impact with the engine below. The system is engaged between 15 and 35 mph.”

Asked if Volkswagen would make the hood standard on other models in its lineup, Anderson wrote in an email: “Anything is possible, but I really couldn’t say.”

The technology could curtail the use of not just aftermarket hoods and hinges but and other front-end parts like bumper fascias given what a Buick video indicates is a pressure sensor in the front of the car. Repairers will presumably need to also take special care around the pyrotechnics for their own safety and pay close attention to the repair procedures — but this time, to protect someone who isn’t even your customer. Another interesting hypothetical to consider: What’s the criminal and civil liability of a shop if one’s botched repair leads to the hood failing to fire when their customer goes out and strikes a pedestrian? For example, consider a situation where the pedestrian dies from a head impact they should have survived if the active hood had deployed to mitigate the injury. Your customer is now up on manslaughter instead of the assault/battery charge they’d arguably have received had you done the repair correctly. What does the state, victim and defendant do in such a scenario?

A “reactive hood” is standard on the 2019 Volkswagen Arteon. (Provided by Volkswagen)

An active hood is standard on all 2018 Buick Regals. (Provided by Buick/Copyright General Motors)