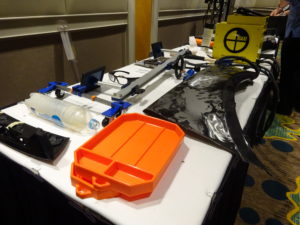 “Some of it doesn’t work,” Chess said.

The gear passing muster is shown off during the Palm Springs, Calif., events two months later. (See our coverage from 2015, 2016 and 2017.) With occasional exceptions, the two repairers buy all the gear themselves to ensure objectivity.

Chess had high praise for the BT-3 battery-powered blind rivet gun from Marson, which delivers more portability than air, charges in a half-hour and can deliver 4,600 pounds of pull force. However, he cautioned that it was not yet approved by Ford for all of the rivets demanded on the aluminum F-150. That welder hasn’t been approved for any OEMs, as it just reached the market, according to Chess. A Pro Spot representative said the company is pursuing those certifications right now, and predicted the welder’s single-phase capability would help many “mom and pop shops” be ready for lightweighted vehicles.

“We’re excited about this product,” he said.

Poor vision can lead to poor welding no matter your electrical infrastructure, and welding experts have cited this as a constant problem in the collision repair industry.

“90 percent of them can’t see,” Chess said of technicians.

Some welding masks don’t have a slot for a magnifier, but there’s a solution which solves that problem and provides eye protection should the technician have to raise the mask to perform another operation, such as grinding, according to Chess and Yeung.

2.0-diopter safety glasses from Kent Automotive provide 2x magnification, double as safety glasses, and are “under 20 bucks,” Chess said. It’s a “cheap piece of equipment” which will improve weld quality, he said.

Chess advised shop owners to buy them for technicians, describing the improved vision as “night and day.”

Technicians are familiar with the Maxi, but Dent Fix’s new Maxi add-ons offer “a lot more versatility,” according to Chess. New keys are magnetic, and unlike traditional pins which could heat metal up to 1,800 degrees, they apply little or no burn-through on the backside of the panel, he said.

Yeung pointed out that the unit runs on 110 volts, which means it can travel anywhere in the shop. Chess showed off a Global Finishing Solutions Revo infrared curing tool, quickly drying high-build primer before the audience. Yeung said other applications could include work on glass, basecoat and clearcoat.

Often, the top of the car is hotter than the side in a heated paint booth, and sometimes coatings aren’t as cured as it seems, according to Yeung; dyeback and insufficient gloss might occur. Even though the car has been heated, “we still run it by” a Revo device, said Yeung.

Yeung said the driver was able to put 5,000 pounds on a chisel and could take the head off a rivet. It comes with a variety of attachments, including a “self-centering punch,” that Yeung called one of his favorites. Chess also recommended the Alpha Professional Tools’ Ultra Cut APR cutoff wheel, which fits on a 4-inch grinder, for flush cutting and removing the heads of such blind rivets. However, it roughs up the surface of a part, and so should only be used on aluminum components which will be replaced, according to Chess and the presentation.

Yeung presented the Nes 1025 thread repair kit, which repairs both inside and outside threads. He said the kit was good enough to save the head of a $450 rivet gun stripped by one of his techs.

“That in itself saved the cost of the tool,” he said.

The tool can handle different sizes of threads, and Yeung also suggested it for large suspension bolts. “You just clean it back out.”

“Great gadget,” he said. “Nice to have in anybody’s toolbox.”

ARIA Tools sells universal air couplers, able to fit both industrial and automotive air fittings, according to the presentation. (A high-flow option is available for painters.)

Yeung said the ARIA couplers might cost more than traditional options, but “they’re rebuildable” should the part be damaged. They also contain a mechanism preventing them from popping and blowing off the hose should a technician drop the hose or unit, Yeung said.

The couplers are stainless steel, according to Chess, and Yeung said they “last forever.”

3M Cavity wax wands come in a packet of three (long, medium and short) and are reusable, Yeung said. Just hang them in the container 3M provides and let the wax drip out after use, he explained.

The Ajon Mobility Device dolly is a “really versatile unit” which provides a convenient way of moving undriveable cars or vehicles with the suspension hanging off the car, according to Yeung. He said Ajon has a Tesla adapter which “works just fantastic” at his luxury-focused European Motor Car Works facility. The wheels have about 6 degrees of positive and negative movement, which means they can adapt to uneven surfaces.

Chess called it “unbelievable” how easy it was to load vehicles with the Dolly, and Yeung called the device more “user-friendly” than competing units on the market.

Yeung said every body shop in the country should have Q-Bond in their emergency kit. He gave the example of a technician who broke tabs while removing a door panel — noting that fasteners today seem to be “so much stronger” that plastic parts seem to be “one-time use.” The part you need must be ordered, and cycle time and delivery date could suffer.

Q-Bond involves spreading black or grey powder over the substrate needing repair and then covering it with adhesive. It’s so strong that “it saves the panel,” he said. He said it’s perfect for irreplaceable parts. Yeung said he’s even used it on metal such as carburetor tabs. “That’s how strong this stuff is,” he said. Chess said he’s also repaired a rubber seal with it.

“You gotta have this in your shop for those quick deals,” Yeung said, calling it “absolutely insane.”

The Re-Grip offers a means of adding a grip to all kinds of tools and comes in multiple sizes.

Grypmat anti-static tool mats are floppy, nonmagnetic tool and fastener organizing trays which can stick to surfaces with angles up to 70 degrees, according to Yeung. Other buyers also appear to have been impressed by the mats, which appeared on “Shark Tank”; Yeung said he had to wait a month and a half to receive the trio pack displayed in Palm Springs.

Collision Edge’s new Mark Safe removable arrow stickers help estimators indicate damage — an alternative to writing all on the vehicle in ink which might be difficult to remove later, according to Yeung.

The strength of a Q-Bond repair is demonstrated in this slide from the 2018 “Kool Tools” presentation at the Jan. 17, 2018, Society of Collision Repair Specialists’ open board meeting. (Provided by Toby Chess/Kent Automotive)