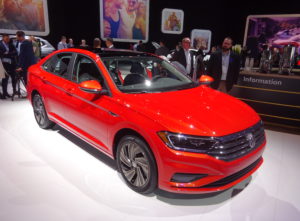 Nearly half of the next-generation 2019 Volkswagen Jetta unveiled last month is ultra-high-strength steel, with the majority of that a stronger hot-formed variant.

Volkswagen based the Jetta on its Modular Transverse Matrix (“MQB”) platform. The architecture also can be found on the 2018 Tiguan and Atlas SUVs and 2019 Arteon sedan. While the Jetta is clearly a different vehicle class than the SUV, the information Gillies provided about the Tiguan’s MQB-based architecture might help give repairers anticipate where the different grades of steel might occur on the car.

The diagram for the European Tiguan indicates that areas including the A- and B-pillars, transmission center tunnel, front floorwell (kickout panel), roof rails, inner frame rails, and rear floor crossmember are all the gigapascal-plus “ultra-high-strength hot formed steel.”

Regions including the Tiguan’s shotguns, another floor crossmember and roof crossmembers and other roof supports connected to the roof rails are ultra-high-strength steel below 1,000 megapascals.

Delivering this combination of lightness and strength through ultra-high-strength steels comes with a tradeoff. For body shops, many if not all of these parts will be replace-only and carry very specific heat and sectioning restrictions. Following repair procedures will be crucial to preserve the passive safety of the vehicle’s passenger cage.

Research indicates that the combination of Volkswagen forward collision warning and autobraking, both of which are available on the Jetta, has in the past led to the number of crashes involving third parties being “almost halved,” Diess said.

The new Jetta will hit dealerships next quarter and start at $18,545, less than the outgoing 2018 model. Diess called it “the best Jetta of all time.”

Other elements possibly of interest to collision repairers: Panoramic sunroofs like this one on a 2019 Volkswagen Jetta on display at the 2018 North American International Auto Show are available as options on the car. (John Huetter/Repairer Driven News)

A Volkswagen Feb. 8, 2018, news release emphasized the lines on the side of the 2019 Jetta. (Provided by Volkswagen)