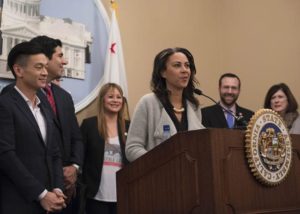 Despite objections from the California Autobody Association and consumer groups, the California Assembly Insurance Committee voted 13-0 in favor of a bill which could undercut the state’s attempt to reform auto body labor rate surveys.

The vote Wednesday on Assembly Bill 2276 echoed the committee’s 2017 13-0 support of AB 1679, the bill’s even worse predecessor which was introduced before the ink was dry on the California Department of Insurance’s regulations.

Those regulations were designed to put an end to the kind of nonsensical surveys being used by insurers to calculate shop labor rates.

“Currently, the various insurers determine a geographic area in several ways, including but not limited to United States Postal Service (USPS) Zip Code areas, city, counties, multiple counties, and some highly irregular and customized ‘markets’ or ‘zones’ which the insurer creates,” the CDI wrote in 2016. “The Department’s experience is that some of the geographic areas used by insurers in surveys result in artificially inaccurate, unreliable, and unreasonably low labor rates that are not representative of the market. For example, in one instance, an insurer used its insurance adjusters’ territories as the geographic areas for its labor rate survey, which may have been convenient for the insurer, but which also had no relationship to the actual market areas where shops were located. The result is a significant range in labor rates used by insurers for the same insured, claimant, or repair shop. A claimant should not be paid significantly differently depending on which insurance company is paying the claim.”

The CDI’s new rules kicked in Feb. 28 and only apply to insurers who choose to conduct labor rate surveys to see what an appropriate price to pay a shop would be. It doesn’t force insurers to perform such surveys, or even use the template provided in the regulations. However, carriers who elected to follow the proposed template for what the CDI suggested was a market could receive a “rebuttable presumption” they were acting in good faith on labor rates.

“At least one major insurer (Farmers) has already taken advantage of the new CDI regulations, and arrived at labor rates that both Farmers and the most shops find fair and reasonable,” California Autobody Association interim Executive Director Don Feeley (City Body and Frame) wrote to Burke on April 9.

A legislative analysis for the Insurance Committee suggests that other survey methodologies have indeed been deemed acceptable by the CDI, but the analyst didn’t elaborate on what these were.

AB 2276 now passes to the Assembly Appropriations Committee, which last year declined to take action on AB 1679. Sponsor Autumn Burke, D-Inglewood, and stakeholders at that time were hammering out an amended version of the bill; that revised language became AB 2276 this session.

“With regards to the voluntary labor rate survey, my objective all along has been to keep insurance costs low, ensure certainty for businesses, establish a fair process to determine a prevailing labor rate, and guarantee that small body shops are able to compete,” Burke said in a statement in January. “I understand that establishing a labor rate is just the start of a negotiation, and I want those negotiations to be fair.

“We have had countless hours of good faith negotiations on this bill with the Consumer Attorneys of California, California Autobody Association, California New Car Dealers, Alliance of Automobile Manufactures, Insurance Companies, and the appropriate policy committee consultants to ensure that we get this complex issue right.”

Feeley in his letter acknowledged Burke’s work and agreed that the new version was better than its predecessor — but was still “fundamentally flawed.” The CAA remains opposed to the measure and has called an emergency meeting over it from 10:30 a.m. to 1 p.m. April 28 at the Los Angeles Trade Tech College.

Burke’s AB 2276 makes major strides from its predecessor AB 1679 by dictating that an labor rate survey conducted by an insurer must follow a specific template — rather than being loose enough to grant a stamp of approval to behavior like that the CDI sought to check   — and cannot use direct repair program rates. It declares insurers must exclude underequipped shops’ answers from their labor rate calculations instead of letting carriers make that decision. It throws out the potential of insurers using ridiculously large areas to define a market, reusing old labor rates or weighting larger shops more than smaller ones.

But prior to all of these changes, the bill sabotages itself by declaring:

“Nothing in this section precludes an insurer from determining the prevailing auto body repair labor rate using other methods that reasonably consider market conditions in a specific geographic area.”

And unlike a survey, the bill does not demand these “reasonable” other methods be disclosed to the public or California Department of Insurance. Which sounds like an insurer can use any methodology that doesn’t involve directly polling shops, and insist without showing their work that whatever that technique calculates as the prevailing rate is correct — at least until someone manages to go through the process of successfully challenging its reasonableness.

Feeley called it out as such in the CAA’s April 9 letter. “The bill provides broad language that would create a loophole allowing insurers to ignore the standards set forth in the bill and to determine labor rates by using any method it chooses in any geographical area,” he wrote to Burke. “This language should be removed.”

The bill also allows insurers to define a market area as an Assembly district, or enough contiguous ZIP Codes in a Local Workforce Development area to include 30 shops. The CDI, in contrast, suggested insurers treat a region extending out a mile from the nearest six shops as the market of shops used for a prevailing rate, questioning the acceptability of larger geographies. However, the legislative analysis indicates the CDI has permitted such regions. “With respect to size of geographic areas, the 80 Assembly district option in the bill compares favorably from a repair shop perspective to many of the surveys actually accepted by DOI, where the number of geographic areas used by insurers typically ranges from the high 20’s to the high 30’s,” analyst Mark Rakich wrote.

But Local Workforce Development areas can be huge, and the ZIP Code provision seems ripe for gerrymandering them. Assembly districts can also be extremely large, for the 2011 California redistricting effort sought to get as close to 465,674 people in each district as possible. District 1, for example, runs from Lake Tahoe to the Oregon border. “Market areas for body shops are small and local to their customers,” Feeley wrote. “Many variances in expenses within a large geographical area will affect labor rates. lt‘s simply not fair or reasonable for a body shop in a higher rent area to accept the same as a shop in a lower rent area. or vice-versa. For example. in your 62nd Assembly District. the bill will allow labor rates from auto body shops in Marina Del Rey and auto body shops in Lawndale to be used to calculate the same prevailing labor rate. These are two very different local markets which will result in unfair and unreasonable labor rates to one or both areas. The bill must address this issue and allow shops, for example, in the Marina Del Rey to get paid their rate the regularly charge. The bill also must settle on one geographical area rather than three geographical areas. Otherwise, insurers will conduct surveys that produce inconsistent and unreliable results. Also the continuous zip codes section is vague and ambiguous.”

Feeley also questioned the bill’s requirement that an insurer survey “a minimum of 30 auto body repair shops or 30 percent of shops, whichever is greater.”

“The bill fails to describe any statistically sound method of surveying less-than-all shops,” he wrote. “A statistically sound method must return close to the same results as surveying all shops, and method offered must be proven to do so. For example there is no mention of an acceptable confidence level. A more transparent approach is to allow a neutral third party such as the BAR (which regulates all auto body shops) to collect labor rate information from body shops when shops renew their license/registration. This would allow for: a) factual labor rates being reported; b) elimination of cherry picking by insurers, c) saving insurers much or all of the cost of gathering rate data; d) consistent and reliable surveys and fewer complaints. Any costs associated with BAR collecting data could be covered by a small increase in annual fees and BAR could also charge insurers a reasonable fee for data.”

Though he earlier described some rate surveys as “a useful tool for insurers to benchmark labor rates in a particular geographical area in order to pay a fair and reasonable labor rate,” Feeley also argued that the bill would unfairly create a maximum labor rate and create a double standard with regard to rates carriers could accept.

“The bill allows for insurers to pay a shop a lesser rate if the shop charges less than the prevailing rate,” he wrote. “Furthermore, the bill allows the insurer to adjust the rate lower than the prevailing rate if the insurer has invoices on file showing the lower rate. However, the bill fails to include a provision allowing a shop to be paid regularly charged rates by proving it through invoices. This is unfair and will result in the prevailing rate serving as a defacto limit or ‘cap’ on labor rates. You suggested as a compromise that if a shop is charging at a higher rate and can prove it through invoices, for example, they should get paid their regular rate. We believe this is fair and reasonable approach but it is not included in the bill.”

Finally, Feeley also pointed out the lack of recognition of materials like aluminum which could carry a separate labor rate. The suggested survey from the CDI asks shops about  “Aluminum,” “Auto Body/Sheet Metal,” “Carbon Fiber,” “Fiberglass,” “Frame,” “Mechanical,” “Refinish” and “Structural Labor” categories of work,” but the survey in AB 2276 ignores the two composite and aluminum rate categories.

“Knowing how to repair aluminum properly is no different than knowing how to perform structural steel repairs properly; both require specific training and equipment and because of that, both have specific labor rates,” Feeley wrote. “These rates are already being surveyed by insurers, and are a requirement of CDI regulations. The bill leaves a big gap in how insurers will pay these rates and invites disputes by consumers and their chosen auto body shops. The written standardized questionnaire must also survey Aluminum. Carbon Fiber and Fiberglass.” (Emphasis Feeley’s.)

For the record, the average California auto body labor rate rose from $55.49 to $56.86 in 2017, according to the first-quarter Mitchell Industry Trends report. That’s a 2.4 percent increase, barely more than the 2.1 percent national inflation rate and less than the California inflation rate of 2.9 percent. California’s Assembly districts as of the 2011 redistricting. (Provided by California Citizens Redistricting Commission)

The average California auto body labor rate rose from $55.49 to $56.86 in 2017, according to the first-quarter Mitchell report. That’s a 2.4 percent increase, barely more than the 2.1 percent national inflation rate and less than the California inflation rate of 2.9 percent. (Provided by Mitchell)