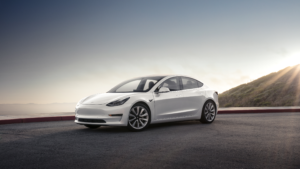 Tesla on Wednesday revealed that the company plans to open its own body shops this year, calling them a source of “substantial revenue generating opportunities.”

“We expect Service and Other losses to reduce substantially in the coming quarters as our service infrastructure becomes significantly more utilized with the ramp of our Model 3 fleet size,” Tesla wrote in its first-quarter earnings letter to shareholders. “There are also substantial revenue generating opportunities as we open our own body shops in 2018 to improve costs of out-of-warranty repairs and as we increase our offering of accessories and merchandise.”

Tesla public relations has not yet returned an email sent early Wednesday evening asking about its plans for these shops and the ramifications for its certified collision repair network. The subject of its collision repair facilities did not come up in the company’s first-quarter earnings call Wednesday, according to a Seeking Alpha transcript.

Tesla announced a year ago in its May 2017 first-quarter earnings letter that it would create its own body shops but gave no other details at that time. Two months prior, the OEM announced it would aggressively expand and improve its its collision repair network following a Motley Fool report of an eight-month wait for Tesla parts. In April 2017, Tesla told its certified repair network that it would shift training to online and replace its own internal rigorous welding requirement with I-CAR’s.

“To significantly improve the customer experience with out-of-warranty body repairs, we intend to open the first Tesla-owned body repair shops later this year and expand the existing network of third-party Tesla certified body shops,” Tesla wrote to investors then.

The references to “out-of-warranty body repairs” in 2017 and again Wednesday are unusual because most body repairs take the form of claims, unless Tesla plans to cater to customer-pay work only. On top of this, a collision isn’t a defect to be fixed under a warranty anyway. It’s also interesting that the “customer experience” of such repairs was a driving factor in May 2017, while cost is now apparently the impetus today.

As for costs, it’ll be interesting to see how Tesla plans to cut the cost of repairs while turning auto body work into a profit center, as the two seem like competing goals. The impending debut of company-owned body shops also raises questions about how Tesla will handle what will soon become a competing certified network of third party shops ranging from single-shop locations to large MSOs like Service King.

What will Tesla, which is subsidized by zillions in investment capital, charge at its shops? How will Tesla allocate parts if past backlogs continue? How will Tesla preserve impartiality in recommending shops to owners? Where are insurers and direct repair programs in all of this?

Granted, similar concerns exist under the traditional scenario of an OEM with an auto body network of both affiliated dealerships containing collision repair centers and third-party facilities. However, those OEM-dealer relationships are indirect, while Tesla’s direct ownership of certified shops creates a different type of marketplace.

As for mechanical service centers, Tesla continues to lose money on them, but to date they haven’t been intended as a profit center. Tesla’s letter speaks more of having them lose less rather than turn a profit.

CEO Elon Musk in the May 2017 earnings call described not treating service as a profit center, according to a Seeking Alpha transcript: “Our aspiration would be we make zero service revenue because the car never breaks.”

This philosophy suggests why Tesla would consider collision a revenue stream but not view mechanical repair in the same light. Based on Tesla’s logic, unexpected breakdowns and a constant need for maintenance would reflect badly on it as an OEM and must be minimized. However, crash would be the fault of an external party — the driver, another motorist, a deer, etc. — and therefore appropriate to make money repairing.

“During Q1, we opened nine new store and service locations, resulting in 339 locations worldwide at the end of the quarter,” Tesla also wrote of its service centers. “We continue to expand our service capacity mainly through growth of our electrified Mobile Service fleet. Such service capacity is quicker to deploy, incurs lower upfront and operating costs and has continued to generate significantly higher customer satisfaction rate at an average of 98%. There are about 300 mobile service vehicles in operation today, which is an equivalent of approximately 60 service locations. At the end of Q1, 25% of all service carried out in North America was done without customers having to visit a physical service center.”

Potentially complicating the rollout of the body shop network will be February’s departure of Tesla global sales and service President Jon McNeill, the former CEO of Sterling Collision. McNeill left to become chief operating officer at Lyft, and Musk told investors during a February earnings call that the company had “no plans” to find a replacement for him.

“Going forward, I will be having the sales and service report directly to me,” said Musk, who is incredibly talented but also has a lot on his plate right now.

Tesla in the shareholder letter described the production of the Model 3 in a manner suggesting the vehicle might be easier to repair for Tesla-certified body shops.

Higher levels of automation have been enabled by a dramatic simplification of product design. Our Model 3 general assembly line consists of fewer than 50 steps, which is about 70% less than conventional assembly lines. All Model 3 vehicles use only one standard body frame, down from more than 80 for Model S, a wiring harness that has 50% less mass than average vehicles, and a fraction of the number of controllers, connectors and CPUs. All these elements are rooted in design and critical not only to our ability to reach higher levels of output in a smaller amount of factory space but also to achieve lower levels of cost.

The company did not reply to an early Wednesday evening email seeking clarification of the 80 body frames reference, and the Seeking Alpha transcript indicates the topic wasn’t raised during the earnings call.

Tesla-certified body shops suggested Tesla might have been referring to  incremental changes to the Model 3 architecture over time. As one wrote:

Tesla like many other oem’s has several different chassis bodies or “nodes” that they use during the manufacturing process ( Think inner structure ) and they upgrade or change from time to time due to safety, efficiency or other model improvements. The point here is that the original Model S architecture has been changed numerous times yet most people do not see these changes. However at a shop and OEM level that changes make the challenges for us even greater. The point with the Model 3 is that at that this point, it only has one design and zero changes or alternates which should lower their costs and improve productivity.

Especially with the high-end automaker, a great deal of post impact re-engineering goes into place when a model does not perform as anticipated post impact. This reengineering phase could not only change materials used and design of crumple Zone, but also placement of pre-safe monitors and sensors.    Another reason why as a repairer it is crucial that we access the most recent repair instruction.

The Tesla Model 3 is shown. (Provided by Tesla)

A 2017 Tesla Model 3 delivery event is shown. (Provided by Tesla)