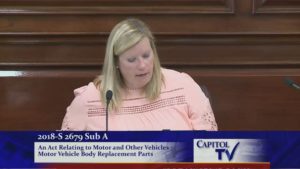 The Rhode Island Senate Judiciary Committee on Monday voted for an amended bill which extends the time Rhode Island insurers must secure consumer consent for aftermarket parts and expands which consumers and parts receive that consideration.

The substitute version of Senate Bill 2679 extends the customer-consent requirement from 30 months to the first 48 months of vehicle life, still less than the average vehicle loan span but one of the longest durations in the country. However, a supporter has pointed out that the bill pegs the time to production date, which can mean as much as six months of the 48 might have elapsed before the consumer actually took possession of the car.

The substitute still requires consumer consent to deviate from the OEM parts catalogue for “any collision damaged part on the vehicle” — not just “body” parts — meaning, as an opponent pointed out, that even windshield wipers would count. It also still demands the consent from third-party claimants — not just the “first-party” vehicles specified under current Rhode Island law. (Though we’d argue that third-party claimants are under no policy obligation to accept anything other than OEM pre-loss, no matter the age of their vehicle.)

Senators by voice vote approved moving and altering what was likely the most controversial part of the law: Its creation of a Rhode Island General Laws 27-10.2-2 (d) stating, “No insurance company may require any repairer to use repair specifications or procedures that are not in compliance with the recommendations of the original equipment manufacturer for those parts.”

Sen. Frank S. Lombardi, D-Cranston, had moved to replace that passage in a substitute version of SB 2679. Committee Chairwoman Sen. Erin Lynch Prata, D-Warwick, said the change “replaces some language that was changed in the original bill. … It cleans that language up.”

Part (d) has instead been folded into 27-10.2-2 (c) and revised to state, “When ‘OEM part(s) are used in the repair of a motor vehicle, no insurance company may require any repairer to use repair procedures that are not in compliance with the recommendations of the original equipment manufacturer.”

Representatives of LKQ, the Automotive Recyclers Association and Property Casualty Insurers Association of America had opposed the original wording, describing it as preventing any recycled and aftermarket parts be used no matter how old the vehicle was. (In general, OEMs specifically recommend against aftermarket or recycled parts.) PCIAA state government relations Vice President Frank O’Brien told the House Corporations Committee he understood that the wording wasn’t intended to deliver an outright ban, but “it would essentially ban the use of aftermarket parts” anyway.

Bill supporters said the language wouldn’t do so and was meant only to apply to installing the parts mentioned in the bill.

“That wasn’t meant to exclude all parts,” Randy Bottella, owner and operator of Reliable Collision and a representative of the Auto Body Association of Rhode Island, told the House committee April 24. But he acknowledged that it might not have been written clearly or been misunderstood.

Another repairer representative, Jina Petrarca, (Petraraca & Petrarca Law Offices), did not respond to an email request asking about ABARI’s view of the substitute bill. ABARI had supported the original version of the measure. Alliance of Automobile Manufacturers state government affairs senior director Wayne Weikel, whose organization backed the original SB 2679, was examining the new language Wednesday.

We asked O’Brien if, assuming PCIAA still opposed the bill on the grounds of the expanded consent period, the changes to Part (d) were enough to satisfy his organization that the bill wouldn’t ban all aftermarket or recycled parts. He replied simply that “PCI remains opposed.” However, he said the company generally felt that a requirement to follow OEM recommendations would ban all other forms of parts. “That’s still a sticking point for us at this time,” he said.

A literal interpretation of the language does seem to still raise questions for both sides.

If aftermarket or recycled parts are used, one would logically still desire them to be installed per OEM repair procedures, not in whatever would be cheapest for the insurer. Repairers should also be allowed to follow OEM repair procedures without insurer interference in instances where a vehicle is able to be fixed without any replacement parts installed.

The bill appears to have cleared all the Senate committees necessary. It’s scheduled for the full Senate on May 15. The companion House Bill 8013 has been held for further consideration (a common step in the Rhode Island Legislature that in no way indicates the bill is dead for the session); a new Corporations Committee hearing date has not yet been scheduled.